This Veganuary, all BrewDog locations are offering an exclusive vegan menu and great offers on food. Not only that, but plant-based pooches can enjoy tasty dishes at selected locations too!

Brewdog is pulling out all the stops this Veganuary with the launch of its exclusive Vegan All Stars Menu.

The menu features collaborations with some of the biggest names in plant-based innovation including Biff’s, THIS™, Temple of Seitan, Beyond Meat, and Moving Mountains.

The menu, which will be available throughout January, features mouthwatering items like the BrewDog & Beyond Burger, Biff’s Double Cheeseburger, Temple of Seitan BBQ Wings, Loaded Skins, and This Isn’t Chicken Gravy Cheese Fries.

As well as the tasty new menu, BrewDog is also extending its 2-4-1 Vegan Mondays offer to every single day throughout January.

To redeem the offer across any of the brewer’s UK burger serving locations, customers can sign-up in advance via the BrewDog website and receive a single-use voucher for 2-4-1 vegan and veggie mains, redeemable on any day of the week.

With irresistibly delicious food and irresistible prices to match, anyone attempting a plant-based diet this Veganuary will find it that much tastier.

James Brown, Managing Director at BrewDog, said: “To start the new year in the best way possible, BrewDog is bringing together plant-based legends to create a month-long menu that will satisfy vegan foodies and meat-lovers alike, as well as rolling out our 2-4-1 Vegan Mondays special to every day.

“As a carbon-negative brewery, we’re delighted to offer our fans an exclusive menu that has a positive planetary impact this January.”

Sustainability is at the core of everything BrewDog does and the launch of the Vegan All Star menu is part of its wider commitment to the planet. In 2020, BrewDog became the world’s first brewery to achieve carbon negative status.

In the event of further COVID-19 restrictions, customers will be able to order from the Vegan All Stars menu direct to their own home via delivery.

It’s not just vegan humans who can eat their fill at BrewDog. Plant-based pups can chow down too, thanks to a partnership with dog food company The Pack.

At participating BrewDogs and other cafes and restaurants, customers’ pooches will be offered a complimentary ‘Dogs Dinner Done Right’ vegan meal of their choice.

They’ll be able to pick from three nutritionally complete flavours; ‘No Fishy Dishy’, ‘No Moo Ragu’ and ‘No Cluck Casserole’, made with blends of pulses, vegan proteins, seeds, fruits, vegetables, and superfoods, meticulously crafted for happy tummies, shiny coats, and maximum wags. 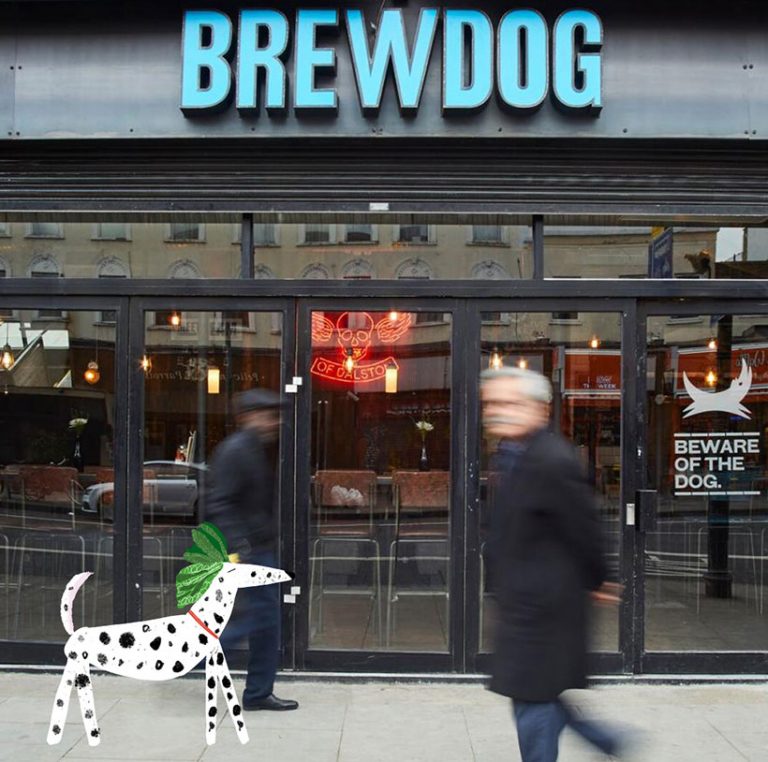 The Pack’s ‘Dog’s Dinner Done Right’ will be available from the below locations throughout January:

The Pack believes that the same meat-free disruption seen in the human world is needed in the meat-heavy pet food industry, which currently produces 64 million tons of carbon dioxide each year.

The pet food startup’s products are also available from The Pack’s website and on The Vegan Kind Supermarket. THE PACK has huge plans to grow in 2022 as they embark on their mission to make plant-based eating for dogs an everyday occurrence.

Are you thinking of helping your dog go plant-based? Read about feeding dogs a vegan diet.