Survey reveals best supermarkets for vegans this Christmas, and it’s not Asda or Sainsbury’s

Garden of Life have ranked the UK's 9 biggest supermarkets according to their vegan offerings, and the winner isn't Asda or Sainsbury's!

Health brand Garden of Life has analysed the nine biggest supermarkets in the UK and decided which one has the best own-brand offering online for vegans.

They first determined which supermarket had the biggest total number of own branded vegan options available on their website and then compared the supermarkets on price using everyday items to see which one had the best value range.

Coming out on top for the biggest range of vegan options was Tesco. The iconic supermarket had the largest number of own-brand vegan products across all the categories including food to go, ready meals, and desserts. Tescos’ total came to 76 own-brand vegan products, with Asda coming a close second with 72 and Waitrose in third with 60.

However, when it came to the best value vegan options Asda pipped the post, winning six out of ten categories. This is likely due to Asda’s recent price drop on everyday free-from products in a bid to make alternative lifestyles more accessible. 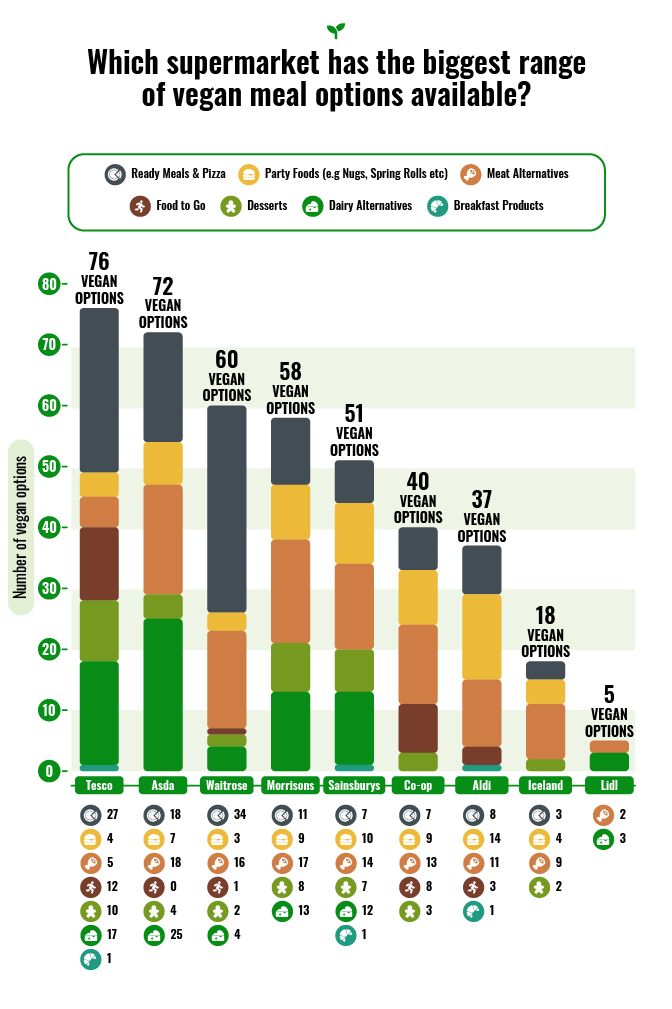 Despite actually having the largest range of ready meals and pizzas, Waitrose was the most expensive supermarket. For example, their ready meals will set you back between £3.75-£5.00, while at the other end of the scale Asda’s ready meals start at £1.50.

Furthermore, Asda’s dairy alternatives came out as the cheapest, with their own-brand soya milk set at £0.62 compared to £0.90p+ at the remaining supermarkets.

However, pricing was not analysed for Aldi and Lidl, who would have likely come out as the best value for money with own-brand soya milk from just £0.55.

But it was Morrisons who sole the prize for cheapest ice cream, with their own-brand vanilla ice cream costing just £0.80 – up to three times cheaper than other supermarkets.

Arguments against veganism often include the claim that vegan products are more expensive than their animal-based counterparts. While this may be the case for some items and brands, you can live vegan on a budget.

This survey has shown that concerning everyday items such as milk and cheese, the vegan alternative does not have to be more expensive. With soya milk available for as little as 55p, there’s simply no need to still be drinking cows milk.

However, what this survey has also demonstrated is that the best vegan products are often spread out across different supermarkets. This can make shopping vegan more difficult, especially if you have a busy lifestyle or caring responsibilities.

Having to go to multiple supermarkets for your weekly shop is definitely not ideal, so sometimes it is a toss-up between spending a bit more money or more time.

You can read the full report by Garden of Vegan here.