Ben & Jerry's has launched a non-dairy vegan version of the popular flavour Phish Food, made with almond milk.

Are you feeling nostalgic about digging into a pint of Ben & Jerry’s Phish Food ice cream in your pre-vegan days? Well, now you can live out your dreams! Ben & Jerry’s is launching a vegan version, made with almond milk instead of dairy.

The non-dairy version of the chocolatey favourite is complete with gooey vegan marshmallow, caramel swirls and mini fudge fish – just like the original.

Phish Food Non-Dairy is not only vegan but also gluten-free, halal and fairtrade, making it the perfect evening treat (or morning, we don’t judge!)

While the dessert is only launching in the US, we have everything crossed that it can swim across the pond and make its way onto our British supermarket shelves.

Phish Food originally launched back in 1997 as a collaboration between the ice cream creators and the popular American rock band Phish.

Since its inception, a percentage of the profits from the flavour has gone to the band’s charity the WaterWheel Foundation which maintains the environmental wellbeing of Lake Champlain in Vermont.

Speaking in a statement, Ben & Jerry’s CEO Matthew McCarthy said: “Plant-based eating is one of the biggest trends in the world and ice cream lovers everywhere have shouted for non-dairy/vegan options that rise to the levels of Ben & Jerry’s euphoric awesomeness.

“I am over-the-moon excited that our Flavor Gurus have churned out something that is nothing short of spectacular.” 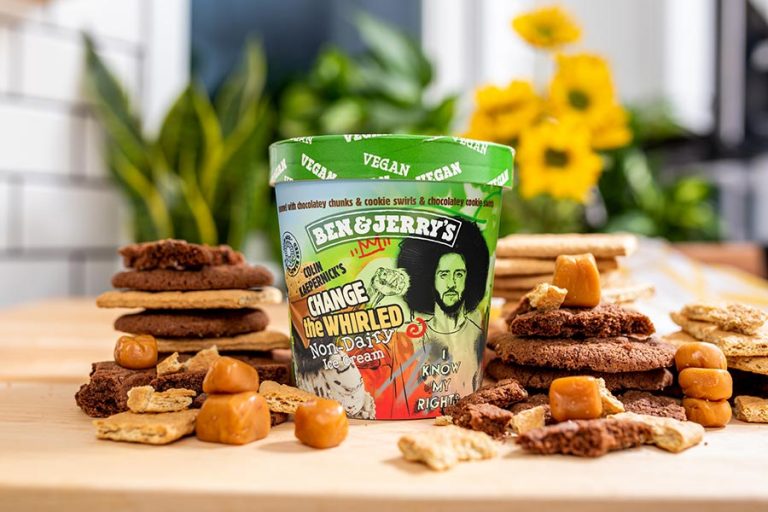 Save Our Swirled was a rebrand of the ‘Coconutterly Caramel’d’ flavour, and saw Ben & Jerry’s team up with The Climate Coalition to encourage the public to ask their leaders to focus on tackling the climate crisis.

Along a similar vein, ‘Change the Whirled’ was created in collaboration with Colin Kaepernick and donates to the Know Your Rights Camp which supports the liberation and well-being of black and brown communities.

Ben & Jerry’s now stocks 16 different dairy-free flavours in the U.S. and six in the UK. Come on Ben & Jerry’s, give us a vegan Phish Food ice cream too!

Try this no-churn vegan strawberry ice cream and see how easy it is!