Ben & Jerry's has finally launched its long-awaited vegan Phish Food ice cream after it launched in the US in 2021. The ice cream giant has also partnered with Tony's Chocolonely to create a dairy-free flavour made from sustainable cocoa beans.

Due to popular demand, the cult brand has veganised one of its most iconic flavours: Phish Food.

The chocolate ice cream, which features marshmallow swirls, caramel, and fish-shaped vegan chocolate chunks, is available in Tesco stores across the UK.

In a statement sent to Vegan Food & Living, Ben & Jerry’s Gabby Smith said: “Our fans have been hooked on Phish Food for the last 25 years and it’s o-phish-ally getting the non-dairy encore it deserves.

“We’re so excited to be able to introduce a tub packed full of non-dairy deliciousness without compromising on any of the chunks and swirls that Phish Food is know for.”

The ice cream giant has also partnered with Tony’s Chocolonely to tackle modern slavery and child labour in the chocolate industry.

The chocolate ice cream is packed with salted cara-melt-in-your-mouth swirls, and plenty of chocolatey & caramel chunks*. 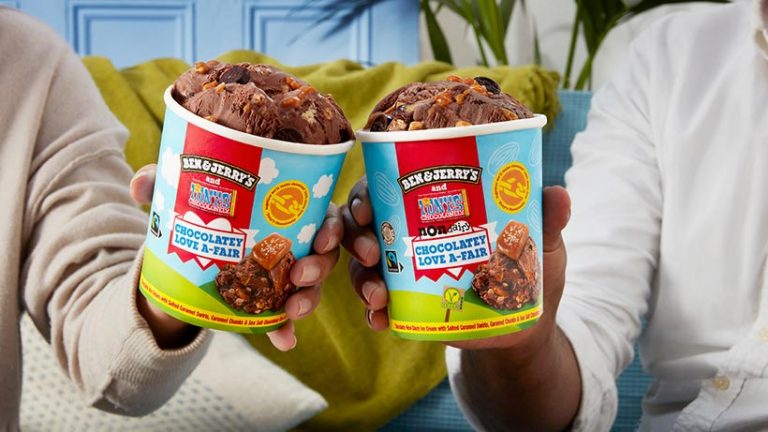 The cocoa beans from the new range are sourced through Tony’s Open Chain – which sets out five sourcing principles urging companies to ‘take responsibility for ensuring a fully traceable cocoa supply chain and paying a higher price to address poverty’.

“We are serious about chocolatey ice cream, and we are eager to join forces with Tony’s Open Chain as a Mission Ally, on a delicious journey towards a more ethical future for cocoa production that all chocolate lovers deserve!”

*Chocolatey Love A-Fair is available in both dairy and non-dairy versions.

Confused about why some alcohol isn’t vegan?

Get the facts as we explore which alcohol is vegan.