Aptly named ‘Netflix & Chilll’d’, a cheeky nod to the slang term the streaming service has become associated with, the dairy-free dessert features peanut butter ice-cream made using almond-milk, with sweet and salty pretzel swirls topped with a generous helping of fudge brownies.

According to the company’s website: “There’s something for everyone to watch on Netflix & flavors for everyone to enjoy from Ben & Jerry’s, so we’ve teamed up to bring you a chillaxing new creation that’s certain to satisfy any sweet or salty snack craving. It’s a flavorful world, and everyone is invited to grab a spoon.”

Matthew McCarthy, CEO of Ben & Jerry’s, said: “This is the perfect pairing between Ben & Jerry’s and Netflix, to bring more magic to millions of fans (taste buds) across the globe.”

To celebrate the partnership, Ben & Jerry’s has announced its plans to release the flavour worldwide to over 20 different countries, a first in the brand’s history.

The new vegan flavour will retail at an RRP of £5.49 and will be available in major supermarkets across the country from February. 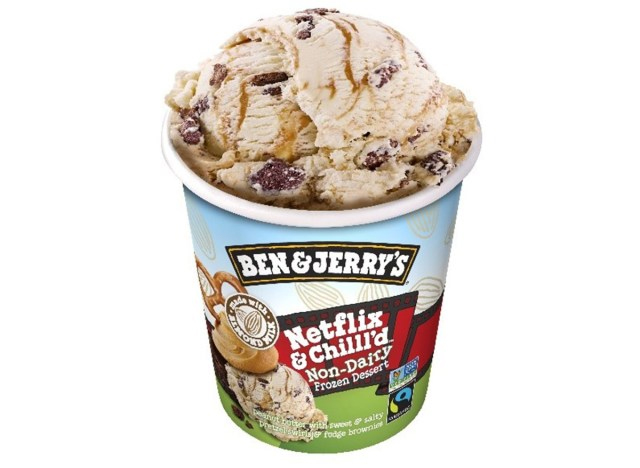 In 2017, the ice cream brand added three more flavours to its non-dairy range in the US (which now makes 25 percent of their total product line-up), with those in the UK currently able to enjoy five non-dairy Ben & Jerry’s flavours – Coconutterly Caramel’d, Cookie Dough, Chunky Monkey, Chocolate Fudge Brownie and Peanut & Butter Cookies.

Ben & Jerry’s recently came under fire for promoting the image of happy cows on its packaging when the dairy industry is notoriously cruel.

The company has since removed a statement from its labels claiming that its ice cream comes from “happy cows” as well as removing the happy expressions from the cows on its packaging amid ongoing litigation with an organic consumers group.

The new vegan flavour will retail at an RRP of £5.49 and will be available in major supermarkets across the country from February.