Asda launches two new vegan brands with over 112 products, including No Prawn Sandwich

Products from the new ranges by Asda - called OMV! and Plant Based - are available in store now, with further products to launch throughout the year

Asda has launched two new vegan brands which boast more than 112 vegan products between them.

The two ranges – called OMV! and Plant Based – are aimed at everyone from ‘seasoned vegans‘ to those doing Veganuary, and those ‘simply looking to cut down meat consumption’.

According to the retailer, its OMV! offers ‘decadent, tasty treats sure to tantalise your tastebuds’.

Among the products on offer are chicken burgers, brioche buns, and sausages, as well as grab-and-go options including a chicken wrap.

Among the new products on offer are Asda’s OMV! Hot & Spicy No Chicken Burgers (£2.25) which are made from a pea and wheat protein, encased in a spicy crumb. The retailer recommends pairing the burger with its OMV! Brioche Burger Buns (£1.15).

Other items under the banner include the OMV! No Pork Caramelised Red Onion Sausages (£2), and OMV! Macaroni Cheese (£2.85), which features ‘traditional macaroni pasta with an oozing coconut oil-based cheese alternative… topped off with a flavour filled paprika and parsley crumb’.

For those looking to do more cooking with a helping hand, the range features sauces such as OMV! Grilled Red Pepper Pesto (£1), OMV! Saag Masala Cooking Sauce (£2), and OMV! Caesar Style Dressing (£1.25)

Meanwhile those with a sweet tooth have also been catered for, with decadent treats including its Choc Brownies (£2), and Salted Fudge Chocolate Bar (£2.50), plus Salted Caramel Flavour Hot Choc (£2) on offer. 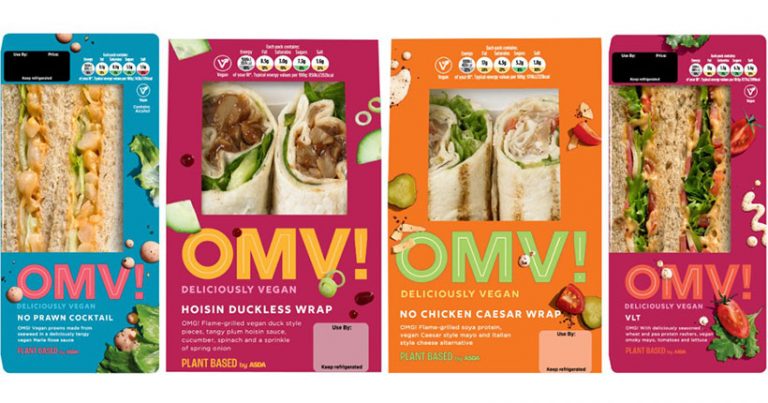 The store’s Plant Based range, which it describes as offering nutritionally-balanced, healthy vegan options, also offers a slew of products.

Among them are the retailer’s Bacon style rashers (£2). Made with wheat protein, the meaty slices are nutritionist-approved.

Have you taken the Veganuary pledge this year? Look no further than our best easy Veganuary recipes to get all the culinary inspiration you need