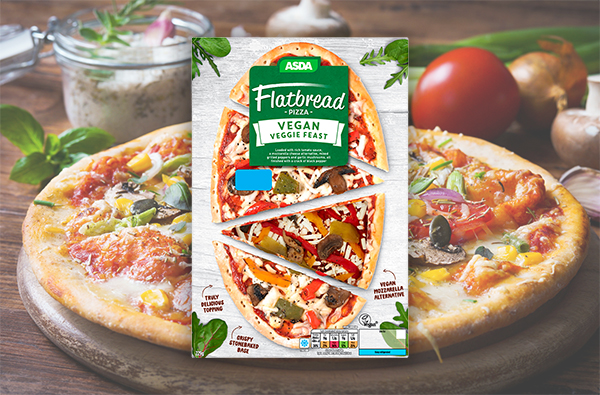 In a bid to meet the growing demands from customers for vegan options, UK supermarket Asda recently released a range of own-brand vegetarian and vegan options into its chilled aisle. Now the supermarket has another new vegan product to its range in the form of a stonebaked pizza topped with vegan cheese.

The vegan pizza is loaded with rich tomato sauce, a mozzarella cheese alternative, mixed grilled peppers and garlic mushrooms, all finished with a crack of black pepper.

In a statement sent to Vegan Food & Living, a spokesperson for the company described the plant-based pizza saying: “We care about our crusts and make a big deal out of our bases – that’s why we know that stonebaking is always the answer for a classically crispy crust.

“So from firing up our flatbread bases on baking stones to finishing with tasty toppings, we make sure that every slice is a pizza pure perfection!”

Vegan pizza has never been so easy to find with the likes of Goodfella’s, Morrisons and Iceland supermarket adding vegan-friendly pizzas to supermarket shelves in the UK.

The new vegan pizza is available to purchase in Asda now and is priced at £2.50