On the evening of Monday 6 November animal welfare organisation Viva! and vegan celebrity Peter Egan conducted a peaceful, spectacular stunt outside National Pig Awards in central London to send a loud and clear message to the pig industry, press and the public – that government and industry are failing to acknowledge the severe shortcomings of British pig farming and need to be held accountable for their actions. 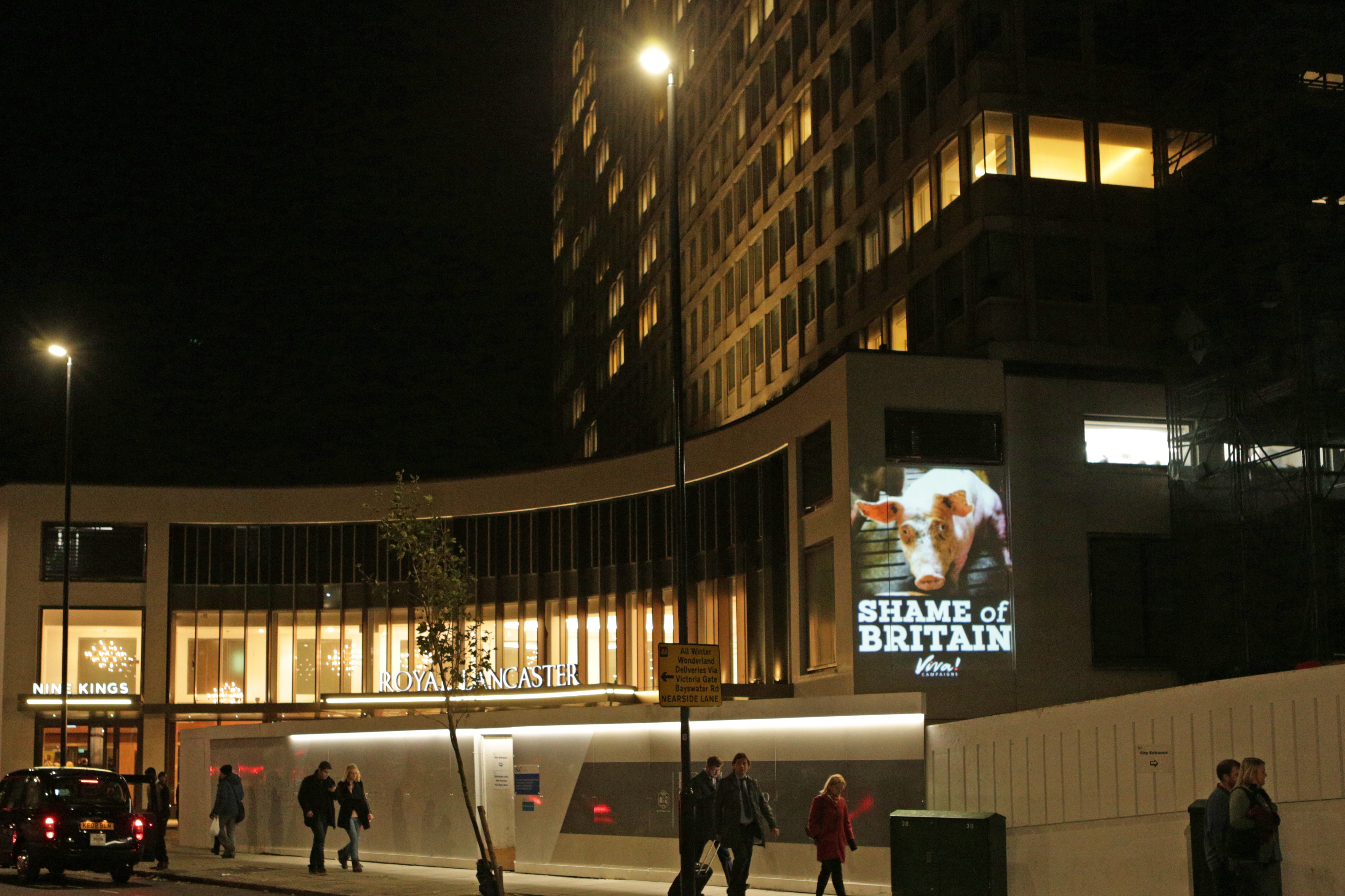 Viva! enlisted the help of highly-skilled experts to project incredibly powerful images on to the exterior walls of Lancaster Hotel on the night of the awards. Images from a variety of Viva!’s undercover investigations into intensive British pig farms were projected on one whole side of the hotel, allowing the images to be seen by thousands of people in the surrounding area.

As well as projecting the bold images onto the hotel they also handed out their own award naming the pig industry the ‘Shame of Britain’. Peter Egan and Viva! founder and director, Juliet Gellatley, who was the winner of the first Pride of Britain awards for animal welfare, stood outside the entrance to the awards holding a prize prop with the text ‘Shame of Britain’.

“I’m here today with Viva! to speak out against the atrocities taking place on Britain’s factory pig farms. The images we are projecting tonight offer an insight into the realities of pig farming, where incarceration, disease and suffering is commonplace. The National Pig Awards are a sham, there is nothing about the pig farming industry that should be celebrated. The public needs to know the truth.”

The purpose of this innovative stunt was to show the public and press the realities of the British pig farming industry and encourage them to try vegan. Government and industry go to extreme lengths to hide the cruelty and squalor of pig farming from the public. By exposing the truth Viva! publicly shame those responsible for keeping animals in awful conditions and hold them accountable. 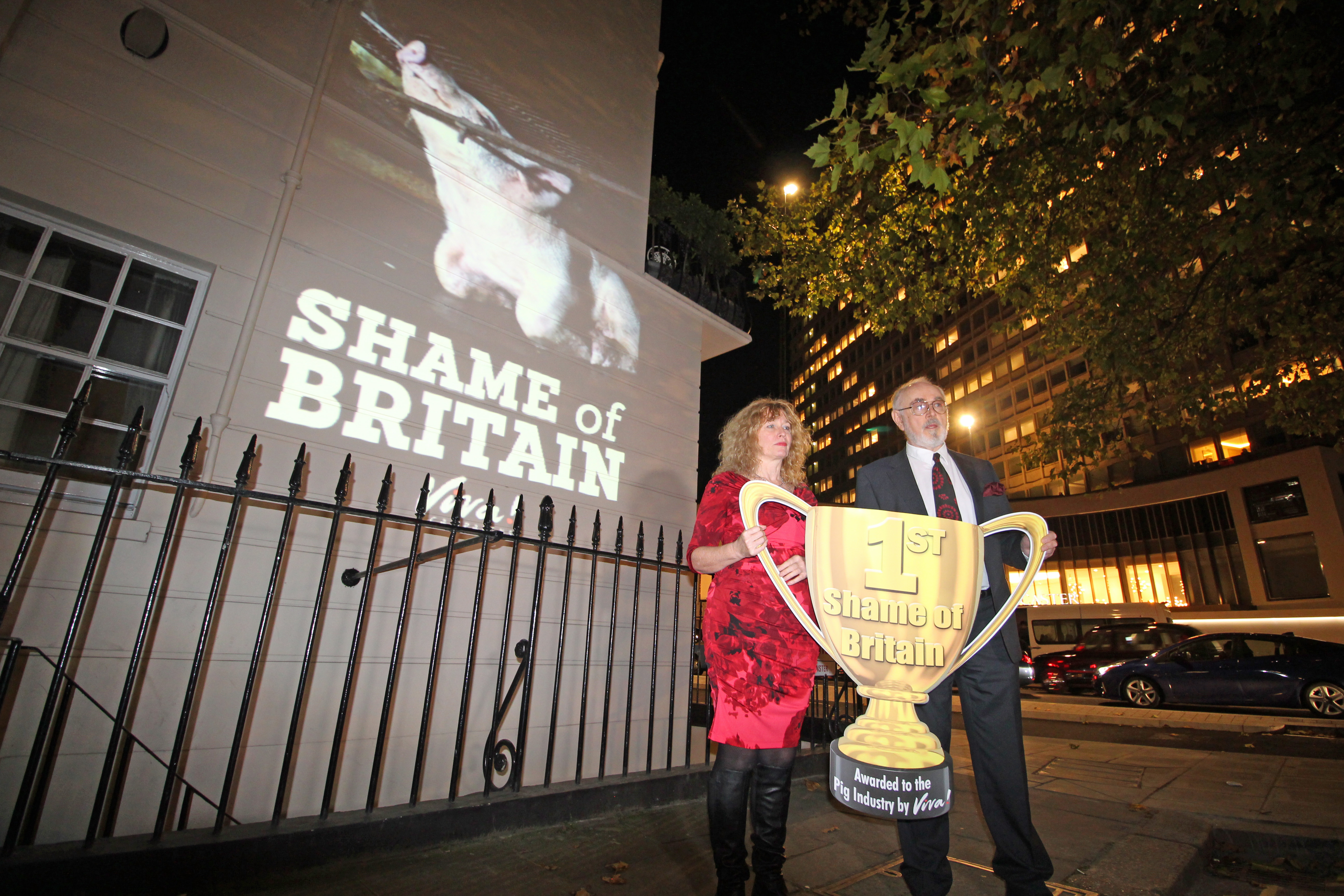 The National Pig Awards website describes the event “The National Pig Awards were launched in 2014 by Pig World, and organised in association with the NPA, AHDB Pork and the BPA. These awards aim to recognise and reward best practice in British pig production and are the only awards exclusively for the British Pig industry. Sponsored by some of the best-known companies in the market, these awards have been a huge success each year with more than 50 entries and over 350 attendees to the 2016 event”.

Viva! have exposed that 90 per cent of pigs in Britain are factory farmed. Viva! used images from  investigations of pig farms that supply major supermarket chains, Red Tractor and are government approved. The images used in the projections expose farms where severe overcrowding, mothers held in crates, mutilations of piglets and sick animals left to rot amongst the living were found.

Several images from Viva! Campaigns most recent and shocking undercover investigation into Hogwood ‘Horror’ Pig Farm was used in the projection. This investigation gained huge amounts of media coverage including a double page spread and a follow up story in the Sunday Mirror.

For a full summary of the investigation please visit: www.viva.org.uk/hogwood.