Aldi has launched a new vegan barbecue campaign with new dishes inspired by Nando's and KFC after research showed 47% of Brits struggle to cater for vegans at BBQs.

In response to these findings, Aldi is launching its vegan-friendly BBQ range inspired by popular dishes on Nando’s vegan menu and KFC’s vegan menu. Perfect for vegans and meat-eaters who are wanting to try something new.

The vegan BBQ range includes creations such as Vegan Peri-Peri Butterly ‘Chicken’, Vegan ‘Hotdogs’, and much to our excitement, the return of Aldis iconic Vegan No Spicy ‘Chicken’ Burger.

Taking inspiration from the nations favourite chicken restaurant, the Vegan Peri-Peri Butterfly Chicken is priced at just £1.99! The flavour-packed meat alternative will not only save you 75% compared to the meat option, but will also contribute towards saving our feathery friends – sounds like a no-brainer!

In addition, vegans have been rejoicing over the relaunch of Aldis Vegan No Spicy ‘Chicken’ Burger. The crispy ‘chicken’ burger was revolutionary for non-meat eaters, with its juicy textures and crispy, flavoursome coating it’s hard to believe it only cost £1.99 for 2.

After months of the product being discontinued, the supermarket announced the return of the ‘chicken’ burgers just in time for summer. This summer is shaping out to be a good one.

As well as meat-free juicy hotdogs, don’t forget to pick up the stores Plant Menu Veggibabs – available flavours include Spicy Tex Mex and Indian Inspired. Not only are these perfect for barbie season, we even enjoy them for midweek dinners. 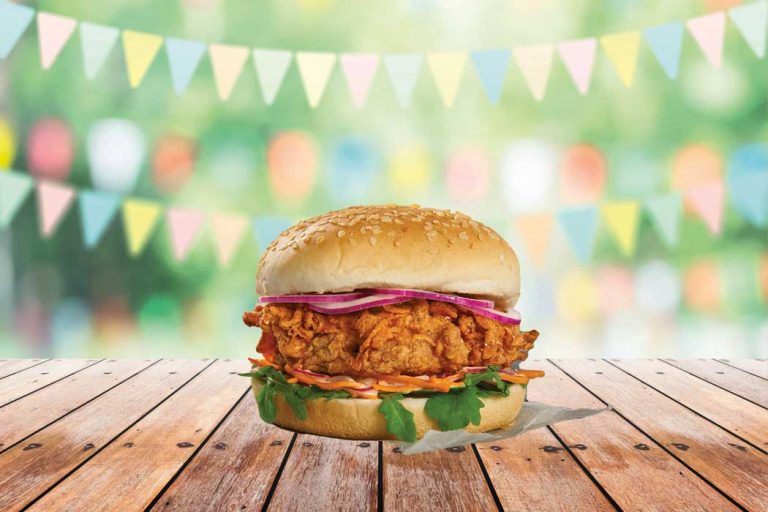 Celebrity chef and face of Aldis Raising The BarBeque campaign Judy Joo, shares three simple steps to make the most out of plant-based food this BBQ season.

Already planning your vegan BBQ? Here are 13 vegan kebab and skewer recipes fit for the grill.