Vegan cheese manufacturer Violife has just aired the first of two brand new adverts that will be shown on mainstream TV to millions of viewers across the UK for the first time. 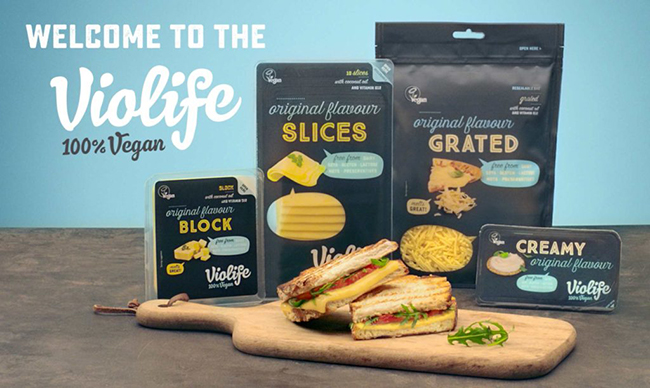 Vegan cheese has come on leaps and bounds in recent years, and with so much choice on offer, it makes sense that it would start to compete with dairy cheeses by launching an advert to be aired on mainstream television to encourage millions of consumers to make the change to dairy-free alternatives.

In order not to alienate the general public, vegan cheese manufacturers have opted to show consumers how simple it is to make the switch to vegan products with a series of light-hearted adverts.

The adverts show two characters, James and Anna, using Violife’s vegan cheese for the first time and realising just how effortless the change was, before (incorrectly) assuming that if making the change was that easy that perhaps other more outlandish dreams might be possible too, resulting in the campaign line of ‘Maybe we’ve made dairy-free too easy…’

Speaking about the process behind creating a vegan advert for mainstream TV that did not alienate those who have no tried vegan cheese before, Marketing Manager of Violife, Thania Drakopoulou, said:  “Finding the right balance between showing what Violife can actually do and communicating how a plant-based, vegan option can find its place in every home, was not an easy task.”

“VCCP helped us identify the right ingredients in this ‘recipe’, resulting in a great campaign that promotes the ease of turning every-day food, like toasties, pizzas, jacket potatoes, pasta, into a delicious, dairy-free meal. Showing how everyone is welcome to the Violife.”

Creative Director at VCCP, Caroline Rawlings, added: “The beauty of Violife is that it offers a way for the non almond-blending, avocado-crushing folk amongst us to go dairy-free once in a while.

“I think the team has done a lovely job of turning this insight into work that’s a bit different for the category and, with any luck, might even muster a smile.  Proud.”