He may be well over 100 years old, but Diego the tortoise still has plenty of charm with the ladies, and he’s using it to ensure that his species lives on… 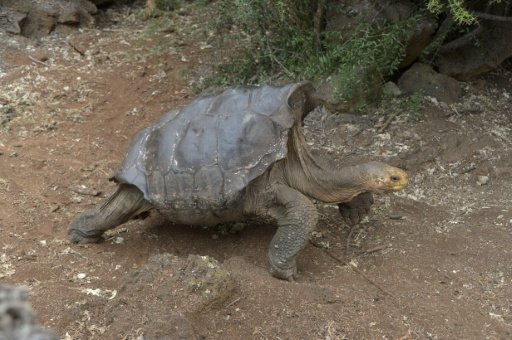 © AFP / by Santiago Piedra Silva | Diego, a tortoise of the endangered Chelonoidis hoodensis subspecies from Española Island, is seen in a breeding centre at Galapagos National Park, Ecuador on September 10, 2016

The giant Galapagos tortoise has been “working” since the 1960s—when there were only 14 wild tortoises, two of which were male, left on Española—to save his native species from the brink of extinction. And he’s doing an impressive job.

Based on recent genetic studies, Diego has single-handedly fathered an estimated 800 offspring—40 percent of the 2,000 captive-bred tortoises that have since been released into the wild.

Scientists say Diego is the dominant male of the three assigned to repopulate the island, and weighs about 175 pounds, is nearly 35 inches long and 5 feet tall.

While most of Diego’s history remains a mystery, scientists do know he was discovered at the San Diego Zoo in the 1950s. After being located at the zoo, Diego was brought back to the Galapagos in 1976 and put in the captive breeding program, AFP reported. He currently lives at a tortoise breeding centre on Santa Cruz Island in the Galapagos, where he and six females share an enclosure.

This story first appeared on France24.