Why the dairy industry is past its sell-by date

As well as inflicting animal suffering, it is one of the leading causes of environmental breakdown, and has a negative impact on human health. Will Sorflaten explains why dairy is on its way out.

The only way that a cow produces milk is by having a baby. This is true of any mammal, including humans. So for humans to consume dairy, cows are forcibly impregnated by farmers in order to give birth and start lactating.

So what happens to these calves once they’re born? If the calf is male, he is seen as having very little value to the dairy farm as males cannot produce milk.

Almost 90 per cent of the UK’s dairy cows are the Holstein-Friesian breed — a breed that has been artificially manipulated to produce higher milk yields than those used in beef production.

Therefore, dairy calves are generally smaller and unprofitable when it comes to raising animals for meat.

As a result huge numbers of male calves are killed shortly after birth. In 2015, 95,000 male calves were shot on-farm — this is standard practice (whether we’re talking about an organic, free-range or intensive farm).

If the calf were allowed to live, he would consume his mum’s milk, but farmers need to sell it to humans if they are to make a profit from the animals.

If the calf is female, she will be separated from her mother within 48 hours. Just like humans, mother cows have a maternal desire to protect their babies, and so it is a traumatic experience for both mother and calf.

Mother cows often try and protect their babies when they are taken away from them, and cows have been known to call out for their babies for weeks, until their voices are hoarse.

While her mother’s milk is sold for human consumption, the calf is fed a milk substitute. Contrary to the idea that cows love to be milked, it is often a painful process for them.

Dairy cows now produce as much as twice as much milk as they did 40 years ago. This change has been most dramatic in the last 20 years, with cows producing 1,500 more litres of milk per year now than they did in 2000.

Dairy milk contains 35 hormones[1], which have been shown to increase the risk of breast cancer.

Dairy farmers are keen to continue this rate of production in order to yield more profit from each cow but this unnatural and rapid change in their lactating has resulted in several health issues for cows — lameness, mastitis and udder sores.

The process of artificial insemination, calf separation and lactation is repeated four to six times for each dairy cow over the course of five years.

It’s an exhausting process, and by the time dairy cows hit five years of age they are considered ‘spent’ by the dairy industry.

Naturally, cows can live up to 25 years, but in the dairy industry they are sent to slaughter at just one-fifth of their general life expectancy and sold for cheap beef. 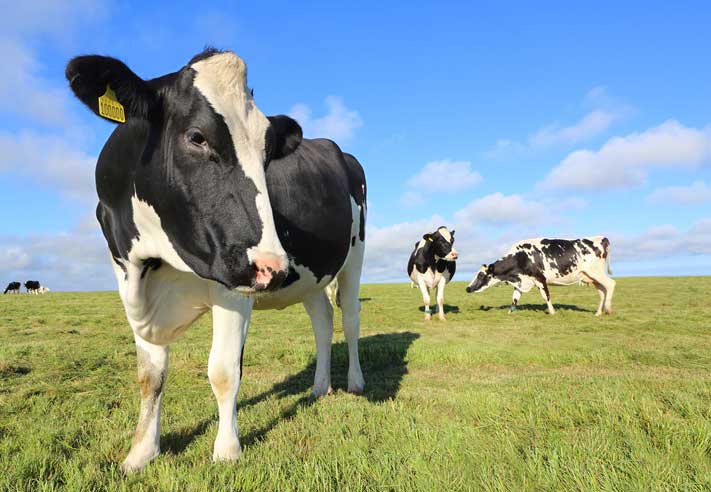 Cow’s milk is not for humans

Not only is the dairy industry systematically cruel to cows, but the idea that dairy is natural or normal for humans to drink is all part of a giant marketing ploy.

Every national health board advises against feeding cow’s milk to children until the age of one. Over 70 per cent of the human population is in fact lactose intolerant[2] — because we are not baby cows!

Dairy milk contains 35 hormones[3], including estrogen and IGF-1, which has been shown to increase the risk of breast, prostate, lung and colon cancer.

With regards to calcium, studies have also shown that people who consume the most dairy have the highest rate of osteoporosis[4], which is bone weakness. The best sources of calcium are plant-based, such as nuts, seeds, soya, beans and lentils.

Finally, dairy is the second highest polluter from the animal sector after beef in the European Union.

Beef has been targeted as the worst animal product on an environmental level, but of course dairy is still coming from the same methane-burping animals, and nitrous oxide run-off is high in farming cows, whether they are used for beef or dairy.

There is some good news in all of this. More and more people are waking up to the fact that we don’t need dairy for our health, it’s harmful to animals and to the environment.

A quarter of Brits now choose plant-based milks over dairy, and the rate will rise as more people learn the truth.

There are dozens of vegan cheeses, milks, yoghurts and ice creams in supermarkets now, and it’s never been easier to ditch dairy for once and for all!

Find out more at scarydairy.org.uk

Learn more about the animal impact of veganism here.

Will Sorflaten works on Viva!’s campaigns to promote veganism as a kinder, more sustainable lifestyle. He is currently focusing on expanding Viva!’s collaboration with university vegan societies.

See more from Will Sorflaten