Vegan hospital food: Is it a basic human right? 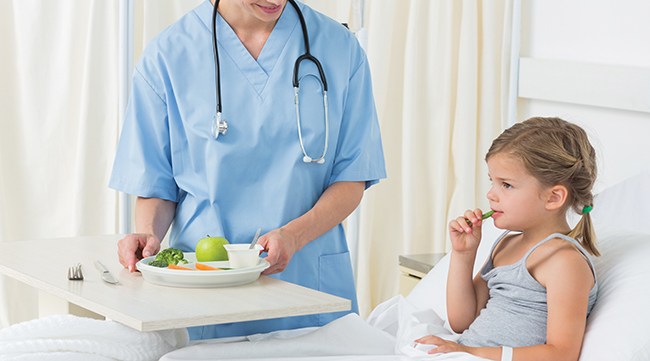 As the dreaded hospital trolley approaches, your heart sinks. What will be today’s offering? Diced vegetables sitting lonely in the middle of the plate or yet another baked potato? Or it may be shredded lettuce, tomato and cucumber as the main event – not a side salad! These are just a taster (no pun intended) of some of the poor offerings UK vegans have been presented with in hospital. It can be a real challenge just getting dinner!

In April this year, Bernadette Green made the headlines when she filed a complaint to East and North Herts NHS Trust after being left hungry for days in hospital. The staff simply didn’t understand what vegan meant – she was offered scrambled eggs, cheese and a tuna sandwich before eventually being presented with a banana. The situation didn’t improve, so she discharged herself and went home to eat something!

The story sparked media interest and BBC Three Counties Radio’s Jonathan Vernon-Smith interviewed Viva!’s founder and director Juliet Gellatley, asking if hospital patients have the right to demand vegan food. “Of course they do,” said Juliet and explained why good nutrition is vital for health and recovery. Former UKIP Councillor Nicky Attenborough said that their priority should be recovering, not food, and that vegans should eat the same as meat-eaters when in hospital, implying that vegans were making an unnecessary fuss and completely missing the point about good nutrition. Such outdated thinking is sadly not as uncommon as you might think.

Some years ago, Viva!Health conducted a survey of vegan food provision in hospitals. Over half the respondents described it as poor, with many hospitals providing no vegan meal options at all. Nearly half of respondents said that some staff didn’t understand what vegan meant and over 70 per cent said dairy-free milk was not available. One patient was fed by cleaners, another accused of having an eating disorder – even though she was desperate to eat – and another was suspected of dementia because the nurse thought ‘vegan’ meant from another planet. We heard of nurses trying to help and even providing their own food for patients. 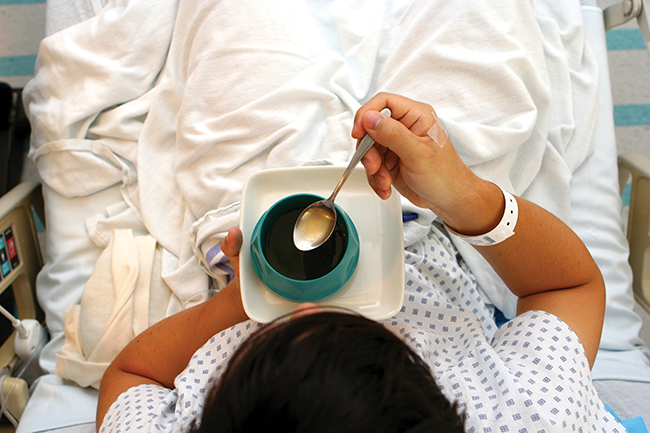 Now, with the huge rise in veganism in the UK, have things changed? Sadly, not much. According to the photos and stories sent to Vegan Hospital Food, Hits & Misses, (a Facebook page I set up in 2015), vegan patients are still routinely going hungry or having to rely on family and friends to feed them.

There are photos of lonely vegetables perched on the side of otherwise empty plates; chips, peas and sweetcorn (with nothing else) make a regular appearance, as does the ubiquitous baked potato. Nothing wrong with that is there? Well, see how you like eating one for lunch and dinner every day for a week. One patient got by eating cucumber and chip sandwiches. Another was given white rice, boiled carrots and cauliflower after complaining about the shredded lettuce, tomato and onions they’d been given for the five previous days! Some hospitals keep a separate allergen menu that may or may not have vegan options on it. You might find a chickpea curry or a Kosher, Halal or an Asian vegan menu – if you’re lucky.

In 2017, Go Vegan Scotland carried out an online survey to find out what issues Scotland-based vegans were facing in hospitals. Many respondents said they had not been provided with suitable food, with some not eating for days, becoming weak and having to discharge themselves early. Many relied on family to bring in food, but not everyone has this option and in some cases they were not allowed to. A general lack of understanding of what veganism means was highlighted as well as instances of disapproval and dismissal. 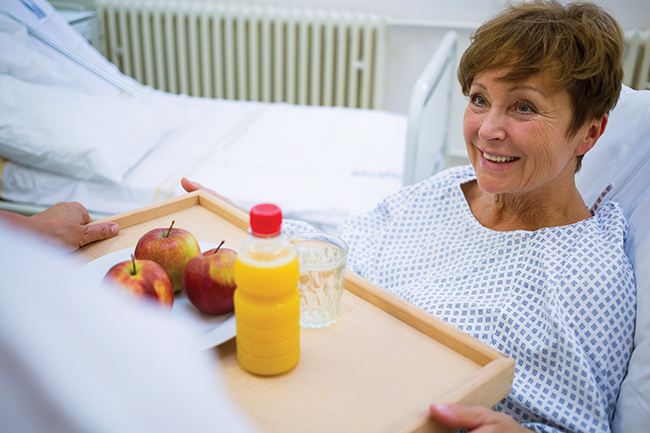 Just at the time when good nutrition really matters, when you are ill or recovering from an accident or illness, vegan patients are being badly let down. Some are being left feeling hungry, vulnerable and isolated. Food is a fundamental part of well-being and lying in hospital going hungry or dreading what the trolley will bring is not conducive to recovery.

The lack of basic nutritional knowledge displayed by catering companies running food services is extremely worrying. The very least our hospitals should be doing is including healthy, plant-based options in their daily menus. There is a wealth of evidence showing how plant-based diets lower your risk of high blood pressure, high cholesterol, obesity, diabetes, heart disease, stroke and certain cancers. Vegans are less likely to suffer from these, but we are not bullet-proof and if we go to hospital we should be fed healthy food. 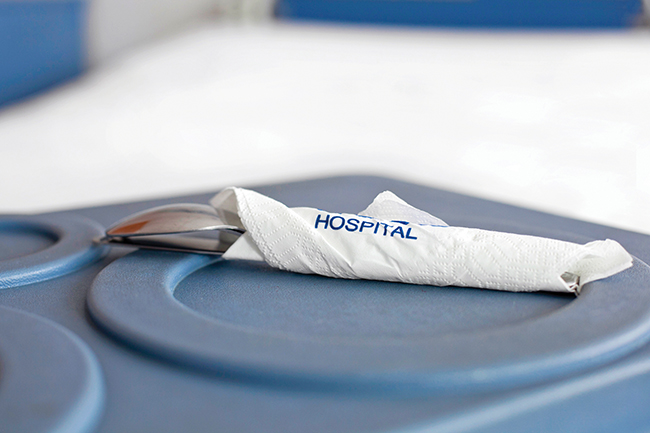 Do we have the right to demand vegan food? Dr Jeanette Rowley, of the International Vegan Rights Alliance, says “Vegans can make claims under the UK Human Rights Act 1998 and the 2010 Equality Act. Under the Human Rights Act vegans can make demands under the right to freedom of conscience and under the protected characteristic ‘religion and belief’ of the EA (Equality Act). Generally speaking, good quality
vegan food should be made available once requested.”

There are some positive stories, however. North Middlesex Hospital has stepped up its game, offering chickpea and sweet potato curry with steamed rice, vegan ‘meatballs’ and roast potatoes and a vegetable and bean casserole – three options on one menu! Birmingham Women’s Hospital kept one vegan patient happy with a butternut squash and kidney bean rice dish served with salad. Croydon University Hospital managed to cook up an aubergine and mixed vegetable stir-fry after a patient met with the catering manager to discuss the limited vegan options. East Lancashire Hospitals Trust has revealed an extensive vegan menu in response to a campaign to increase options on public sector menus. Patients at this hospital could soon be tucking into quinoa with stir-fried vegetables or a Cajun spiced vegetable bean burger. If these hospitals can do it, then all of them can.

In the UK, our NHS is still something to be proud of, but given the strong links between disease and poor diet, it’s time for health authorities to prioritise good food, for both our health and the environment. Food and health are so intrinsically linked, you should be able to get a decent meal in a hospital even if you are vegan – particularly if you’re vegan!