Wondering what's next for veganism? Here are the top vegan food trends for 2022 that will change the face of plant-based eating.

This year we saw the rise of mushrooms as a meat alternative, an influx of vegan sweets and treats, and the success of vegan butcher shops.

These vegan food trends have exploded in popularity and opened up the playing field for 2022.

Overall, it’s been a great year for veganism, but we’ve got our eyes on 2022 as the next big boom for plant-based eats.

So far, the majority of plant-based spending and innovation has been on replicating chicken, beef and cheese. But all this is about to change, as companies are now investing in vegan seafood, pork and chocolate.

Over the course of 2022, we are expecting to see big trends in these sectors, as well as the evolution of vegan fast food, more vegan cakes and bakes, and even a new plant milk.

Keep reading to find out what vegan food trends for 2022 you should be looking out for next year! 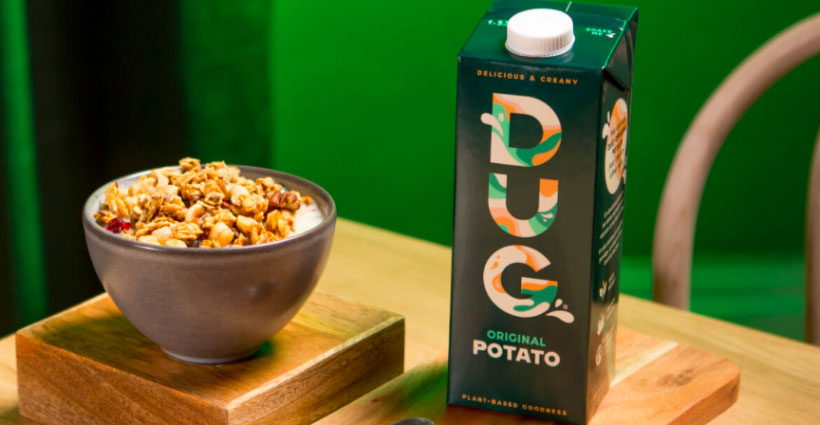 The humble potato is a cupboard staple in every British home.

Used for roast potatoes on Sundays, creamy mash for an easy weeknight dinner and baked in the oven for a comforting lunch of jacket potato and beans. But have you ever thought of… milking it?

Believe it or not, potato milk is a thing now. And we’re predicting it will gain traction at one of the hottest vegan food trends for 2022.

While almond and soya milk are often criticised for their environmental impacts, potato milk is surprisingly sustainable.

Sadly, Britain throws away 5.1 million potatoes every year. But what if there was a way to use that surplus potato instead of wasting it… like milk? That’s why some consumers are choosing potatoes for their morning cereal.

Created by the brand DUG, you can buy potato milk at Waitrose, with three varieties on offer: Original, Unsweetened, and Barista.

We can’t quite imagine switching our pumpkin-spiced oat lattes for potato versions just yet, but we think all this is going to change over the next year.

Here’s to another great year of delicious vegan food and innovative new products! Bring on 2022! 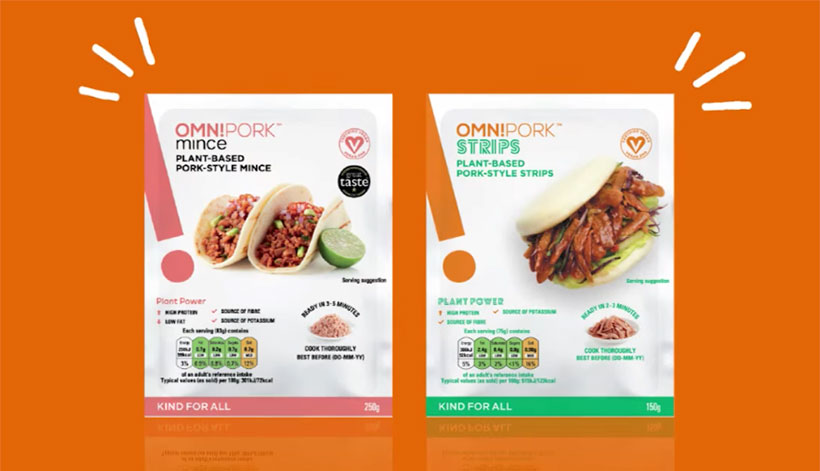 While the humble vegan sausage has been around for years, there haven’t been any other innovations in vegan pork meat itself.

The vegan pork market is wide open in the UK, with no one brand dominating supermarket shelves. But is all this about to change?

In this celebration of plant-based pork, OmniPork is being featured in dishes at over 21 new locations.

From Steamed OmniPork Radish Dumplings at the Royal China Group to Loaded Poyk & Kimchi Friez at No Bonez to The Omni Burger at Nanny Bill’s, the campaign is demonstrating the versatility of plant-based pork.

Moreover, this Christmas Sainsbury’s is launching the first-ever commercially available mock gammon joint made from pea protein and dowsed in a sticky maple glaze. It seems that consumers are ready to ‘pig out’ on plant-based pork!

And we’re sure this trend will only continue to expand throughout 2022. As we all know, meat-eaters love their pork – so the development of these vegan alternatives is an important one!

We’ve all heard the excuse that people can’t go vegan because they love chocolate too much. And let’s be honest, the majority of vegan chocolate just doesn’t hit the spot.

But all that is about to change in 2022 as we see the rise of plant-powered indulgence.

Major chocolate brands are finally realising this huge gap in the market and responding to demand.

This includes new vegan alternatives from the likes of Cadbury, Nestle, Lindt and even Hershey’s across the pond.

Just this month, Cadbury unveiled its new almond-based chocolate, while Nestle teased shoppers with the release of a vegan Milky Way product. 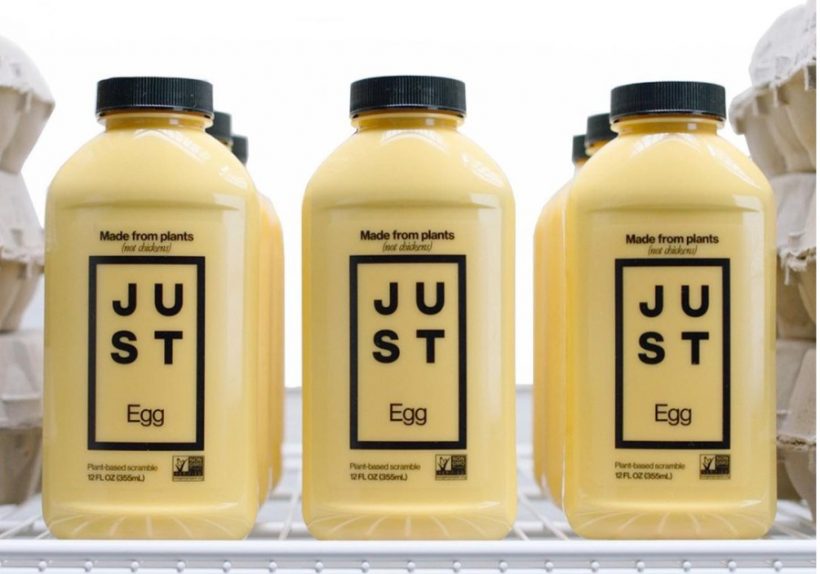 Which came first, the chicken or the egg?

In this case, the chicken came first but now we no longer need them! Vegan egg alternatives are exponentially on the rise.

With vegan bakers demonstrating you can create fantastic bakes without animal products, people are moving away from traditional eggy bakes.

19-year-old Great British Bake Off contestant Freya made waves by entering as a vegan baker and effortlessly veganising every signature and showstopper challenge.

In some cases, her vegan versions worked better than the originals! We don’t think Paul Hollywood was too happy about that…

And by next year, we Britons will have even more choice for our egg-free creations as American brand Just Egg is launching across Europe at the end of 2021.

The brand aims to become the “most consumed egg in the world”, and we have no doubt it will be on its way to achieving that in 2022.

And over in the US, the world’s first commercially available plant-based boiled eggs will be hatching at the end of the year.

Named WunderEggs, the nut-based vegan eggs will look, taste and feel like a traditional egg. 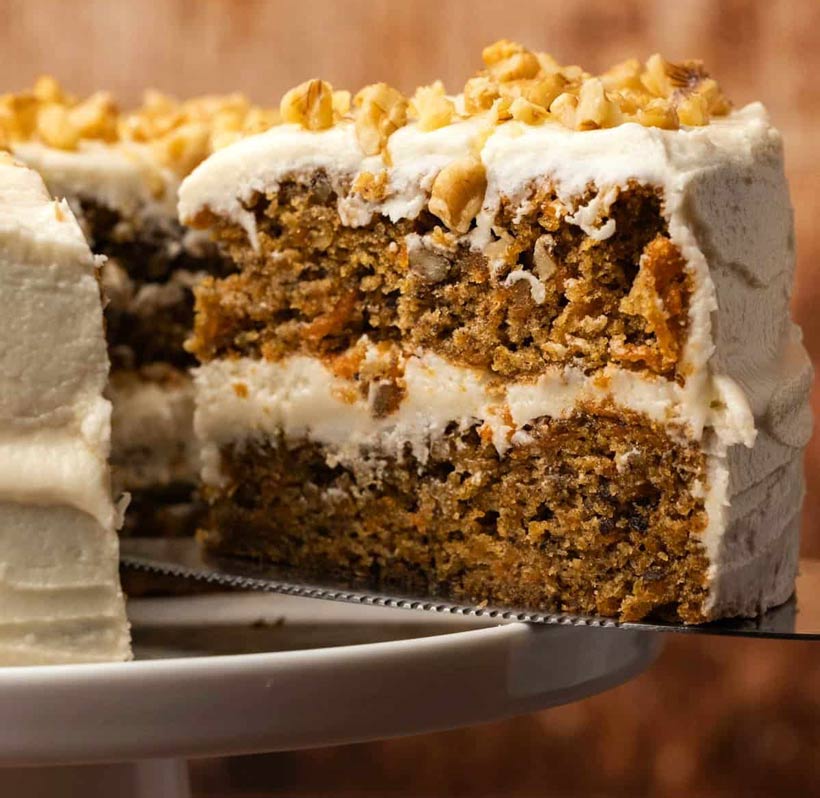 Who doesn’t love a bit of cake with their afternoon cuppa? We certainly do!

And so do a significant amount of vegans because according to Global Market Research company Mintel, there has been significant growth in the vegan cake and bakery category over the last few years with product launches up 170% since 2016.

This is despite a lack of an outright market leader in the category, leaving the field wide-open coming into 2022.

However, there are a few hot brands set to monopolise the vegan supermarket cake shelves.

These include OGGS – selling mini vegan cakes in nostalgic lemon, victoria sponge and chocolate flavours, and mini brownie and millionaires bites, and Bosh – producing traditional round and celebration cakes.

Again, with this year’s The Great British Bake Off showing how delicious vegan bakes can be, more flexitarians and vegan-curious consumers have been dabbling in the options.

And with that, we’re set to see a lot more vegan cakes coming onto the market next year. Pop the kettle on, love! 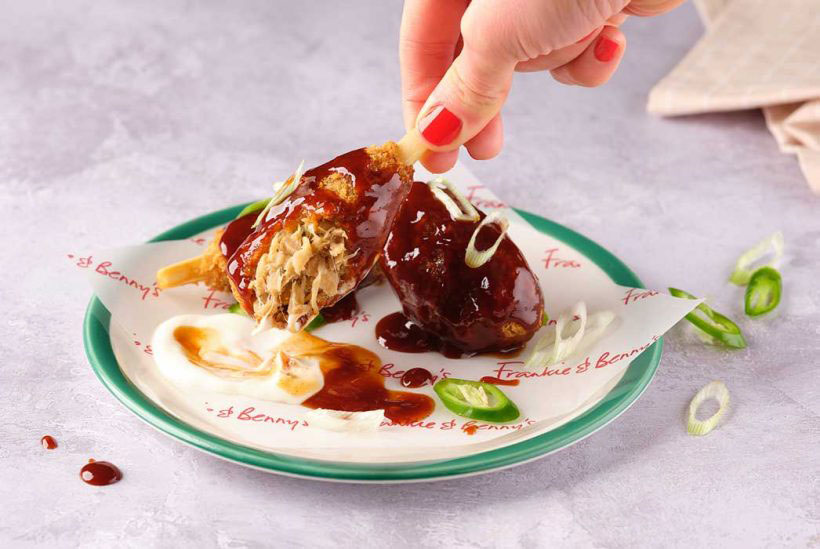 Once only seen as a plant-based substitute for pulled pork, jackfruit has become one of the most versatile meat alternatives on the market.

Brands such as Jack & Bry who create vegan sausages, burgers and even mince out of jackfruit, and Biff’s famous jackfruit wingz and burgers have completely changed the face of the Asian fruit – making it seem much more palatable to meat-eating sceptics.

More and more brands and chefs are including jackfruit in their recipes as it is relatively cheap and easy to use.

Moreover, it can replicate a vast number of animal products from seafood to pork, and even chicken.

And it’s not just confined to specialist shops, as Biff’s recently launched its jackfruit wingz and burgers in pubs and restaurants nationwide including Greene King, Frankie and Benny’s and Brewdog locations.

Meanwhile, Jack and Bry’s specially formulated jackfruit Filet-no-fish patty is on sale at all Neat Burgers across London.

What’s more, you can even find jackfruit ‘pepperoni’ at various pizza outlets such as Papa Johns, Pizza Express and Zizzi. Who knew it was possible?

Jackfruit has certainly become much more mainstream over the past couple of years, and we predict an even bigger boom in 2022! 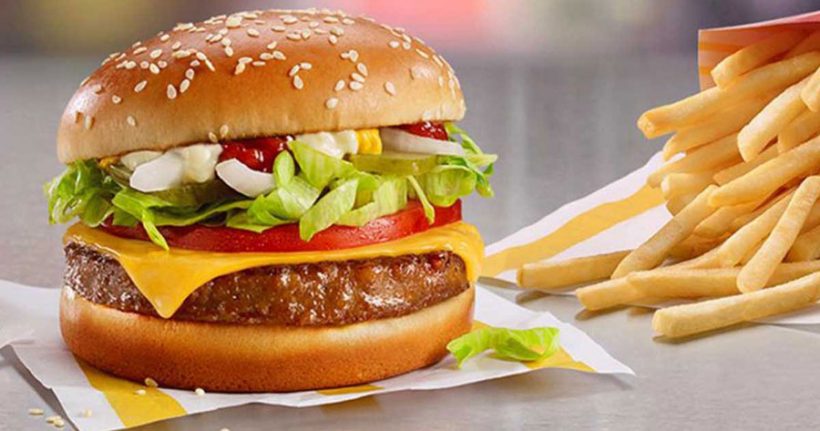 A few years ago, you’d have to settle for a salad and chips at a restaurant or bring your own lunch to work. But in 2021, you can get vegan fast food pretty much anywhere.

From Subway to KFC to Greggs, there are fast, affordable and most importantly delicious vegan options across the UK.

Fast food is going vegan, and we’re here for it!

Perhaps the most significant indication that fast food is going plant-based is the launch of the McDonald’s vegan McPlant burger in over 250 stores across the UK.

And in January 2022, a full nationwide rollout will take the McPlant into every outlet.

The introduction of the McPlant signifies the start of the mainstream plant-based revolution, as it makes vegan food accessible, as well as affordable at just £3.69.

Made with a Beyond Meat patty, vegan cheese and vegan sandwich sauce, McDonald’s has effectively normalised veganism and encouraged plant-based choices.

This adds to the extensive list of plant-based fast food available, including the KFC Original Recipe Vegan Burger and Burger King’s Vegan Royale and Plant-Based Whopper.

While not strictly ‘fast-food’, major restaurant chains have also had a plant-based shakeup in the past couple of months.

This trend is expected to explode in the next year, and send vegan fast food to the forefront in 2022.

Food giant Nestlé is working on a vegan version of shrimp named 'Vrimp'.

Vegans have already conquered the dairy, meat and egg industries with groundbreaking alternatives, but one area still waiting to be cracked is seafood.

Banana blossom fish took off during the last year, with seaside towns and vegan-friendly restaurants embracing the fishy alternative.

But while veganism seems to have mastered the iconic beer-battered fish and chips combo, we are still severely lacking in other seafood options.

However, due to the exponential success of vegan alternatives across the board and the critical acclaim of Netflix documentary Seaspiracy, multiple companies are investing in the future of vegan seafood.

We are expecting to see the commercialisation of vegan salmon, prawns and tuna over the next year.

Dutch brand Vegan Zeastar has the aim of “veganising every dish that involves fish to fight the destruction of our oceans”. And we are totally on board!

Their new vegan ‘Zalmon’ will hit UK shelves next year, and it looks scarily like the real thing.

Meanwhile, commercial giant Nestlé is working on a vegan version of shrimp, aptly named ‘Vrimp’. Made from seaweed and peas and shaped using a special mould, it will be truly groundbreaking.

However, for now, it is only available in a handful of European countries and not the UK.

Alongside salmon and shrimp, tuna is another fishy product that the plant-based market was yet to crack, until this month.

Future Farms just launched its new vegan tuna in Sainsbury’s – and it may just be the first brand to accurately replicate the British favourite.

Made from a blend of soy, pea and chickpea proteins it certainly looks the part with a flaky texture. Move aside chickpea tuna, there’s a new kid in town!

Things are getting fishy in the vegan sphere, and we are definitely here for it!

Find out who’s ditched meat and dairy as 55 vegan celebrities reveal why they went plant-based.