Wondering what all the fuss is about vegan eggs? You've come to the right place!

Vegan eggs have come a long way in recent years thanks to new innovations in technology. New vegan egg replacements are hitting the shelves each day to make baking and cooking easier for those on a plant-based diet.

In our ultimate guide to vegan eggs, we explore why vegans don’t eat eggs and why they’re not as healthy as you might think. We also show you the best vegan egg replacements from natural alternatives to ones you can find in stores.

Take a dive and discover the recent innovations in plant-based eggs that could save the lives of millions of chickens around the world.

And finally, put your new knowledge to the taste with some epic vegan egg recipes to try at home.

There is a multitude of reasons why vegans don’t consume eggs or products containing egg. These include ethical concerns, health, and environmental worries.

The main reason that vegans choose to avoid eggs is that they are simply unethical. Hens are raised to produce hundreds of eggs a year which puts a significant strain on their bodies.

Producing an egg requires hens to leach calories and calcium from their own bodies. Sadly this leads to feather loss, brittle bones and a frail body.

Once hens are ‘spent’ and can no longer produce eggs, they are sent to slaughter and sold as cheap cuts of chicken. This is because it is not economically viable to keep them when they are not able to lay eggs.

Additionally, worldwide 7 billion days old male chicks are culled each year. The reason behind this is because they are useless to the egg industry as they will not lay eggs or grow big enough to become broilers.

Approved methods of culling within the EU and US include live maceration in a high-speed grinder, asphyxiation by carbon dioxide, and suffocation. 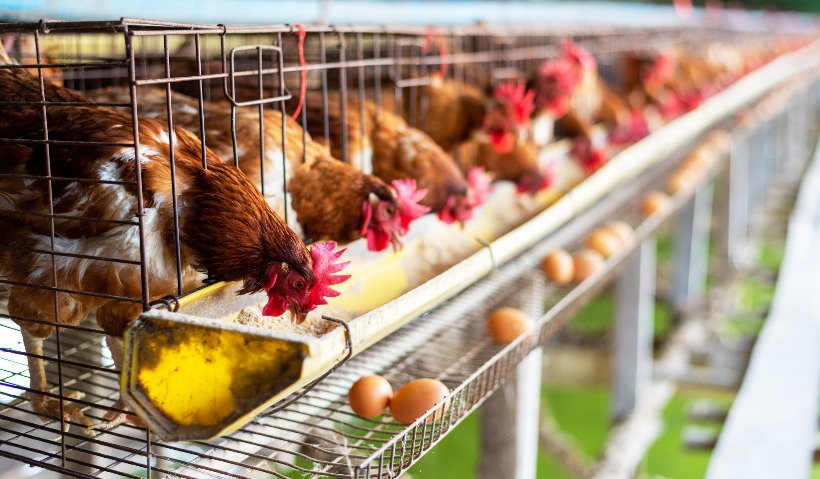 While eggs are hailed as a ‘health food’ in diet culture and the mainstream media, the scientific reality is very different.

Eggs are high in saturated fat, cholesterol and choline, all of which have been strongly linked to potentially fatal cancers. For example, eating five or more eggs a week has been associated with a worrying increase in the risk of breast, prostate and ovarian cancers (Pirozzo et al., 2002).

Moreover, women eating more than two eggs a week had an 82 per cent higher risk of developing ovarian cancer compared to women who rarely eat eggs.

When it comes to heart disease, all health bodies agree that consumption of saturated fat and cholesterol increase your risk. In fact, regular egg yolk consumption contributes to the build-up of arterial plaques (cholesterol deposits on artery walls). This poses a serious risk of causing stroke and heart attack.

The production of eggs generates negative effects on the environment, including the emission of greenhouse gases and the contamination of soil and water.

Data from the Environmental Working Group found that per kilo of eggs, 4.8kg CO2 equivalent is produced. In comparison, tofu produces less than half the emissions, at just 2kg CO2 equivalent. It seems that swapping scrambled eggs for tofu is not only healthier but also more environmentally friendly!

What are the best vegan egg alternatives?

There are plenty of household ingredients you can use in place of eggs in both sweet and savoury recipes. These range from ripe bananas to the Asian staple of chickpea flour and even chickpea water.

These are some of our favourite plant-based egg replacements: 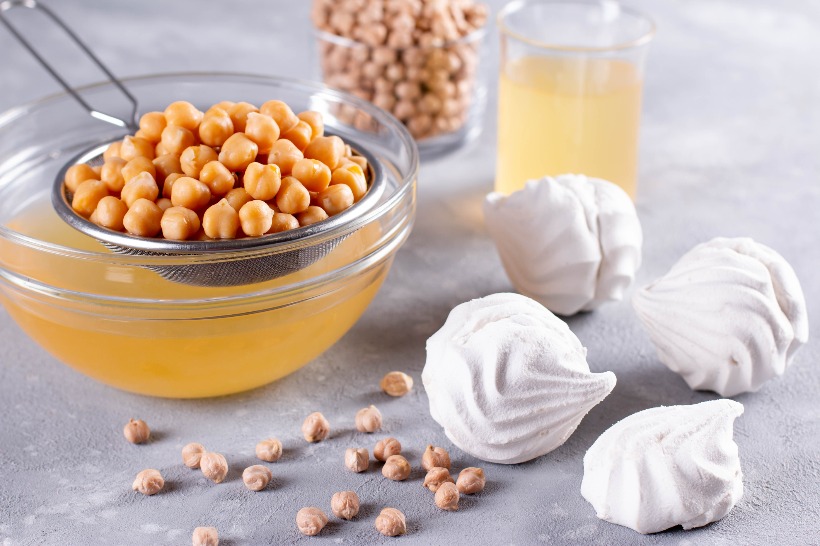 If you’re looking for egg replacements you can buy in stores, there are lots of options available to choose from.

Follow Your Heart – US brand Follow Your Heart launched powdered vegan ‘egg’ a few years ago, packaged in a cardboard egg box. The powdered eggs are added to water, creating a mixture suitable for cooking into recipes. They can even be scrambled in a hot pan or used to make a vegan omelette.

JUST Egg – Another American innovation, JUST Egg revolutionised the plant-based market across the pond. The vegan egg replacement is made from mung bean protein and comes in a liquid ‘plant-based scramble’ form.

It’s also available as a ready-made ‘folded egg’ which can simply be popped in a toaster, microwave, oven or skillet. What’s more, it’s finally on its way across to Europe this year, so keep an eye out!

Eggs are notoriously hard to ‘veganise’ in their natural form. While you can replicate scrambled eggs easily, it is extremely difficult to formulate an egg white and yolk from plant-based sources. However, dozens of innovators across the globe are certainly giving it a crack.

Vegan chef Gaz Oakley gave it a good shot in 2019 when he collaborated with Wagamama to create the ‘Avant Gard’n’ featuring a plant-based egg.

Gaz’s vegan egg certainly looked the part with a realistic coconut-based egg white and a sriracha mayo ‘yolk’, but unfortunately, it doesn’t actually taste of egg.

Instead, the coconutty ‘egg’ acts as a sauce for the rest of the dish, providing a creamy element. You can still order the Avant Gard’n at your local Wagamama if you fancy trying it yourself! 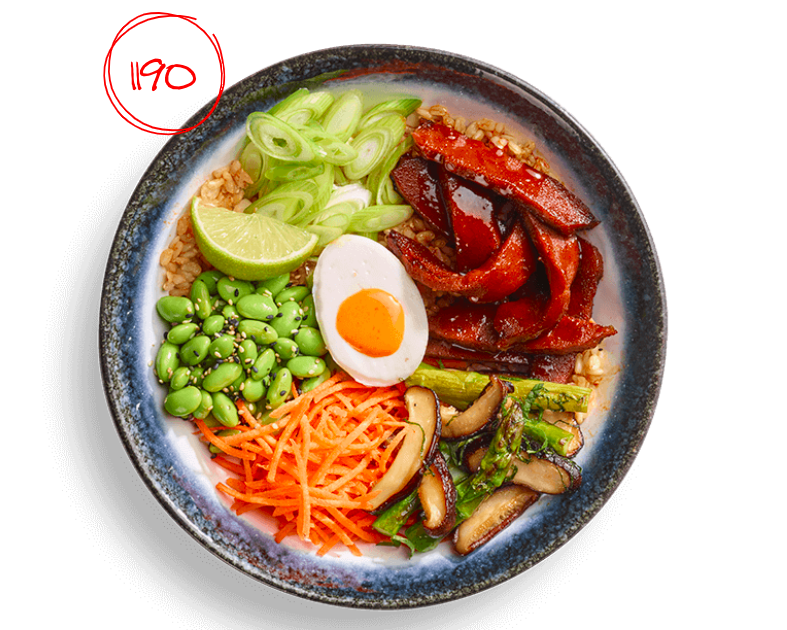 Even more exciting, last year French biologists claimed to have created realistic vegan eggs complete with shells. Biologists Philippine Soulères and Sheryline Thavisouk have spent three years trialling over 50 recipes to create a vegan-friendly egg that is clearly recognisable as an egg.

Although the eggs are completely free from animal products, they feature both the distinctive white and yolk and even come in vegan eco-friendly shells. Named Le Papondu, the start-up is currently undergoing crowdfunding. They hope to be able to make the no-egg eggs more widely available and stock in supermarkets soon.

Asia is currently the largest consumers of chicken eggs in the world, with 65% of global production taking place in the region. Shockingly, nearly 2 billion chicken eggs are consumed in Singapore alone each year.

Therefore, Singaporean company Float Food has just unveiled its exciting new creation, OnlyEg – Asia’s first commercial vegan whole egg substitute. The in-house research team at the tech start-up have used legume-based proteins to create a highly realistic vegan egg that mimics both the yolk and the white. Excitingly, it is said to be a near-perfect replication of a chicken egg.

OnlyEg will be commercially available by 2022 and offers a nutritional value that matches that of a whole chicken egg. However, unlike a chicken egg, the new vegan egg is free from cholesterol, hormones and drug residues. Not only is it kind to animals, but it’s also a healthier, more planet-friendly option. 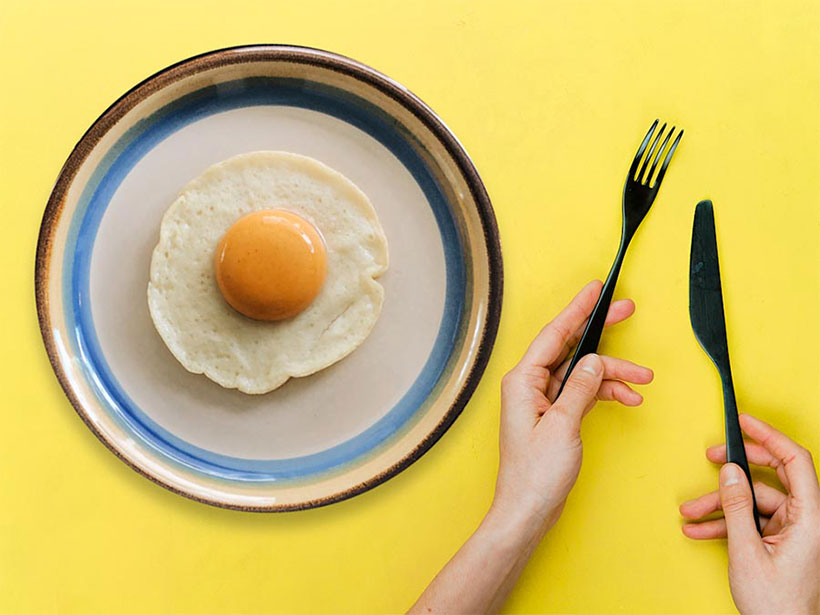 Well, it depends on your specific egg replacement!

Using tofu as an alternative to chicken eggs is certainly a healthier option. While chicken eggs are high in saturated fat, cholesterol and sodium, tofu is higher in iron and protein, cholesterol-free. It’s also lower in fat and a good source of vegan calcium.

Moreover, soy products have been shown to reduce your risk of breast cancer, heart disease and diabetes. So swapping your morning eggs for a tofu scramble instead would be beneficial to your health.

Similarly, sweet baking replacements such as banana, flax and chia seeds offer a host of extra nutritional benefits. These include potassium in bananas, omegas 3 and 6 from chia and magnesium from flaxseed.

In terms of shop-bought egg replacers, they are also generally healthy. Typically, they consist of ingredients such as pea protein, chickpea extract, soy milk powder, nutritional yeast and water.

Whichever vegan egg alternative you opt to try, you can be sure that it is certainly better for you than the hormonal product of a chicken’s period!

Want to try your own hand at making some vegan eggs? We’ve created a round-up of the best vegan egg recipes from scrambles to omelettes.

There’s even a recipe for traditional English breakfast style fried eggs so you can brunch in style!

Looking for a portable savoury sandwich that you can enjoy on the go? Look no further than this veggie-loaded tofu ‘egg’ vegan breakfast sandwich recipe! 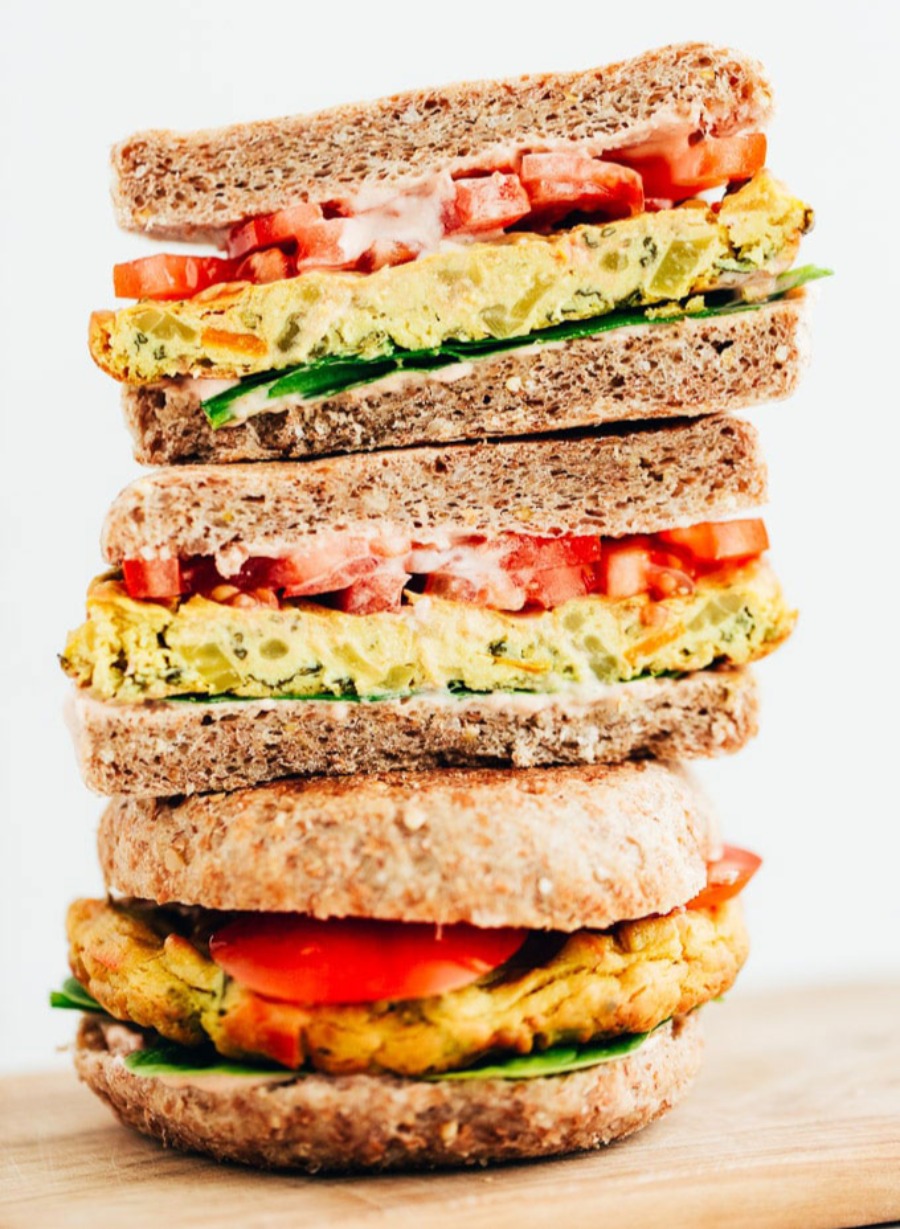 This vegan fried egg pancake recipe proves that the only restriction when it comes to a vegan diet is your imagination!

This epic stack of vegan pancakes is topped with a 100% vegan fried egg and meat-free bacon rashers and is the perfect savoury recipe to start your day.

Despite its realistic appearance, the vegan fried ‘egg’ is made entirely from plant-based ingredients and gets its eggy flavour from Kala Namak, or black salt, which has a sulphurous umami-like flavour that’s similar to a boiled egg yolk. 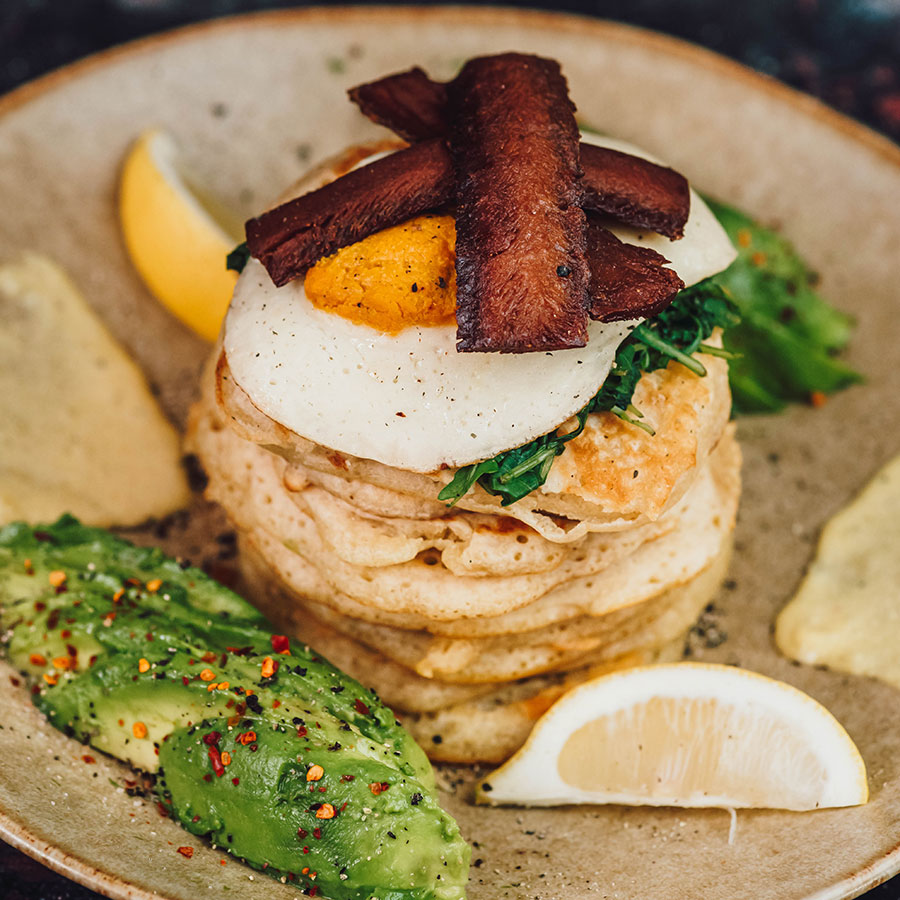 We’ve been banging on about tofu scramble throughout this article, so here’s a recipe for it! 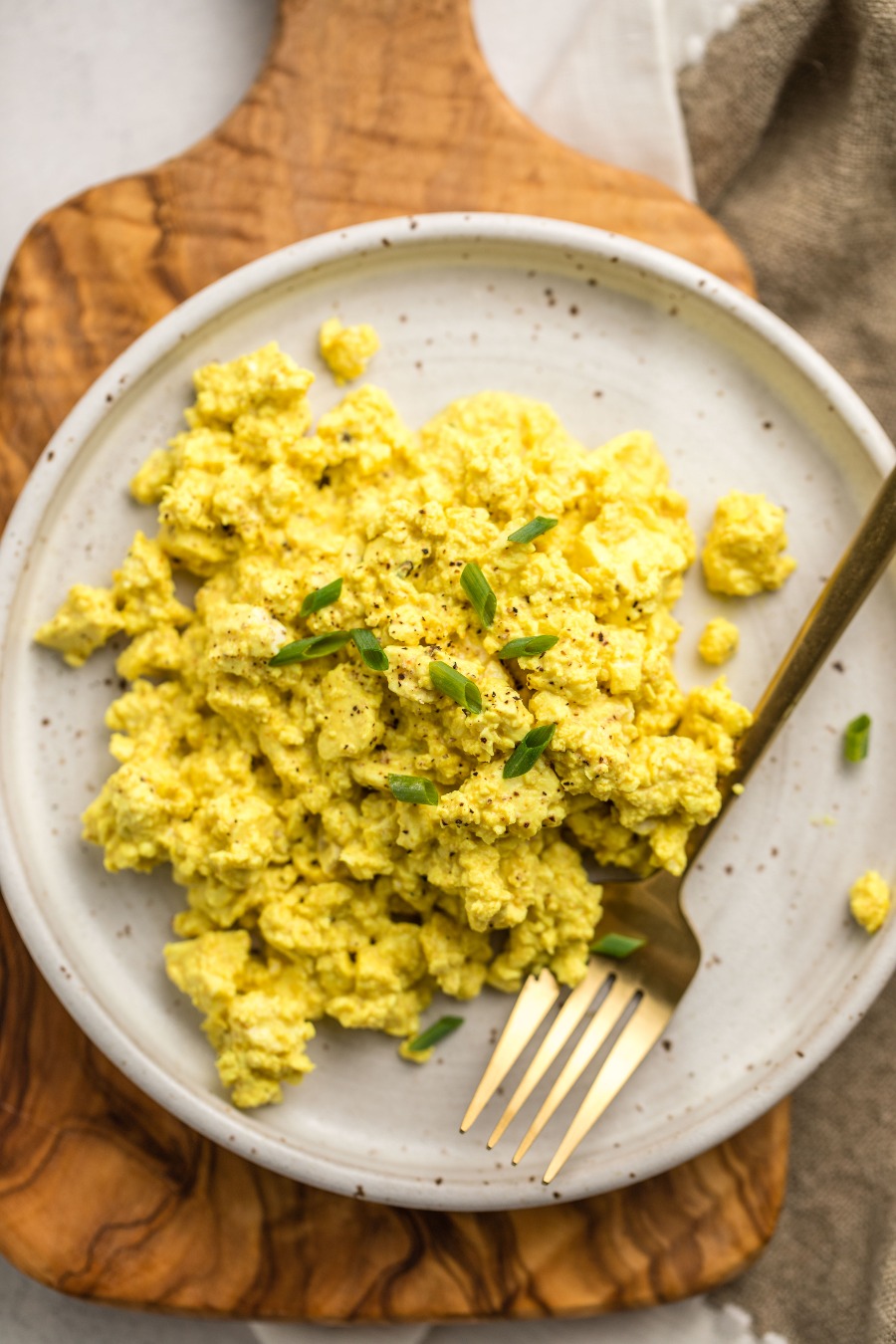 This savoury vegan omelette is perfect for a healthy, plant-based, weekend breakfast. The star of the show is chickpea flour, which is naturally gluten-free and high in protein and fibre.

Packed with your choice of veggies and vegan cheese, this recipe will be on your weekly meal rotation in no time! 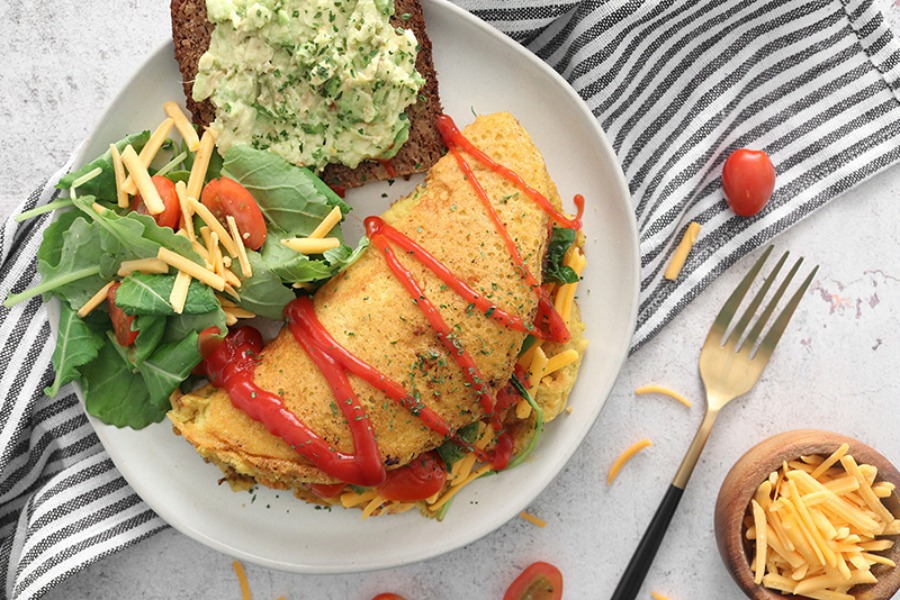 As well as dolloped on your favourite salad, it can also be enjoyed on its own or as a delicious sandwich filling. 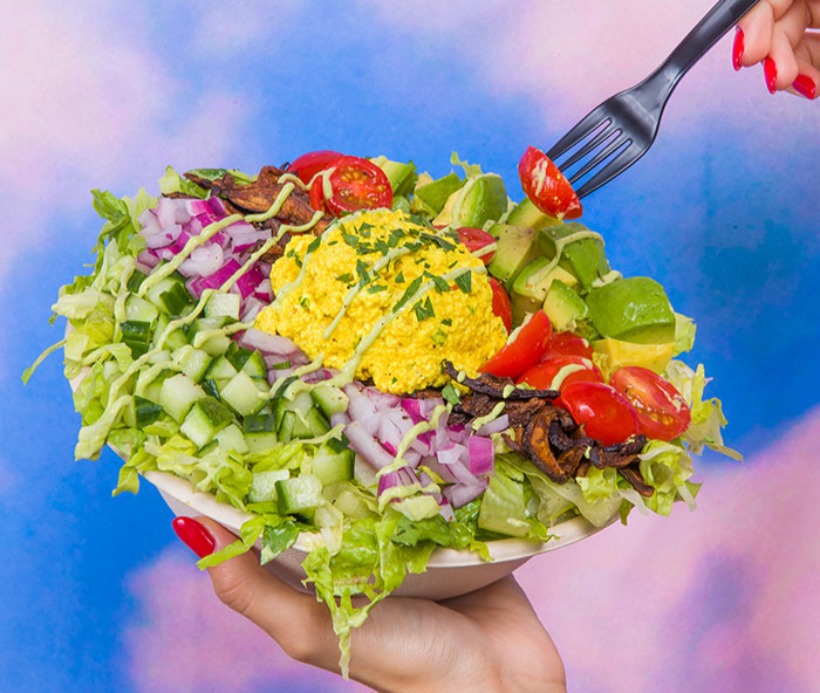 Traditionally prepared with smoked bacon and a mixture of cheese, onions, eggs, and milk as the filling, quiche Lorraine is not the most ‘veganisable’ recipe in the world.

However, this plant-based version using tofu, unsweetened vegan yoghurt, kala namak and nutritional yeast is sure to hit the spot. 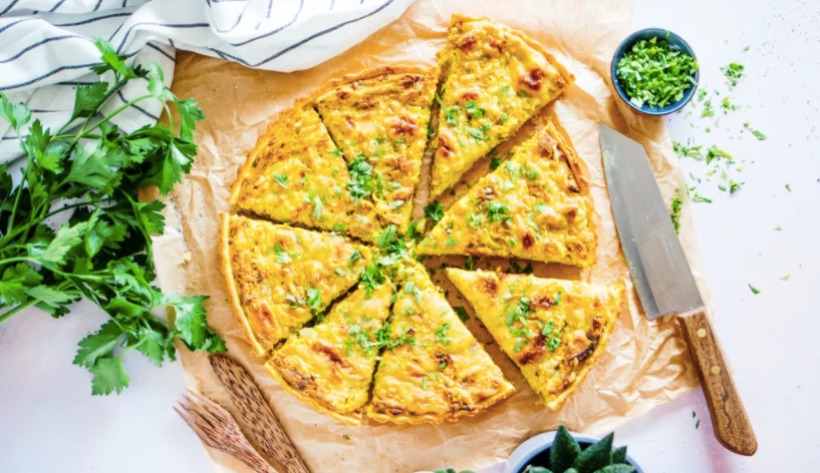 Ready to take your vegan full English breakfast to the next level? Try these incredible vegan fried eggs!

Instead of forming a membrane through a chemical reaction, like in spherification, the tapioca starch in this recipe forms a ‘skin’ in reaction to heat, in a similar way to hot chocolate or soup.

Ready in just 20-30 minutes, these 100% plant-based fried eggs will amaze your non-vegan friends and family, and hopefully, they’ll realise there really is no missing out as a vegan!

Level up your vegan brunch game with this vegan french toast recipe, ready in just 15 minutes for lazy Sunday mornings.

It’s soft, sweet, fluffy, vanilla-flavoured golden perfection, and all you need are a few simple vegan staples you probably already have in your cupboard!

Top tip: slightly stale, thick-cut white bread is the best one to use for French toast, but use whatever you have in for a low-waste option. 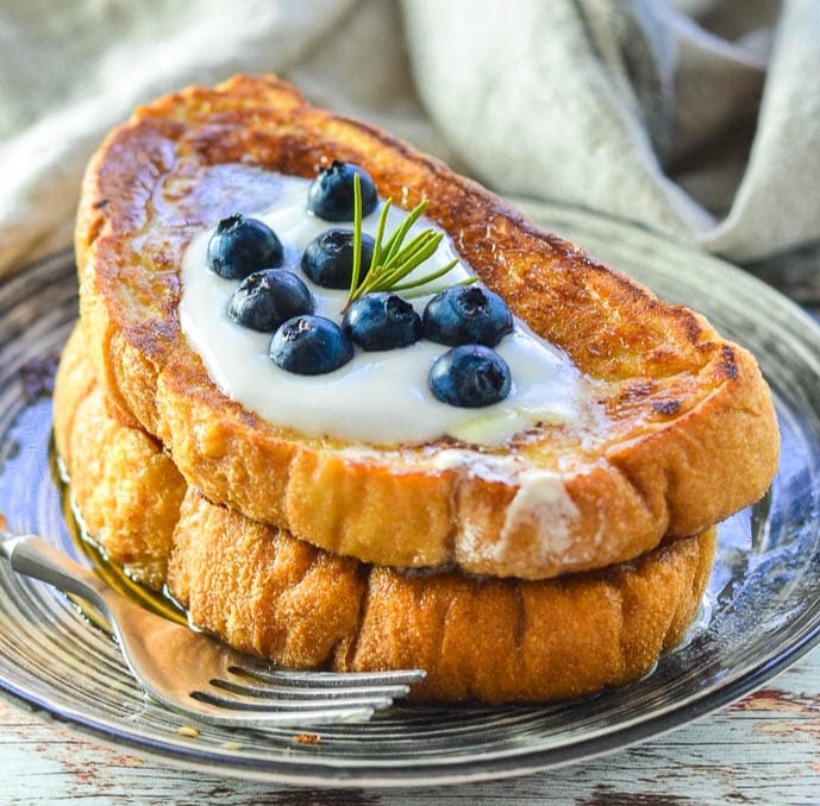 Now that you’ve got to grips with vegan eggs, put them to the test with these show-stopping vegan cake recipes!