Vegan dogs – can you feed your dog a vegan diet?

Look at any debate on feeding dogs a vegan diet and you’ll find people tearing each other apart arguing for or against it. Here’s all you need to know about vegan diet for dogs.

Can you feed your dog a vegan diet?

You can feed your dog a vegan diet but it mustn’t just be lentils and rice. For any dog to thrive, they must eat dog food formulated to fulfil their nutritional needs.

You can make the food yourself and add a supplement powder to enrich it but there’s always the risk that you’ll get it wrong – whether the food is vegan or not1.

Pet food is regulated and has to meet certain criteria to be approved. Vegan dog food brands offer complete nutrition for your dog and they are also often preferred by people whose dogs have allergies.

This is because plant-based dog foods are less likely to cause digestive or skin issues.

What do the experts say about vegan dog food?

Professor Andrew Knight, who conducts research on vegan dog food, said: “Dogs, cats and other species have requirements for nutrients, they don’t need meat or any other particular ingredient.

“They need the set of nutrients, and provided those are supplied to them in a diet that’s sufficiently tasty that they’re motivated to eat it, and digestible, we’d expect to see them thrive. And that’s what the evidence seems to indicate.”2

Opponents claim that to feed your dog right on a vegan diet, you’d have to work with a veterinary specialist. But the truth is, most vets are not well educated in this area.

It’s also worth highlighting that dogs are not just docile wolves. Because dogs were domesticated, they evolved to be able to digest a variety of foods because they survived on food scraps.

As a result, their digestive systems can handle plant foods as well as meat and eggs – they are omnivores3.

It doesn’t mean they can eat anything and be healthy, they still have specific needs, but it means they don’t have to eat meat as long as they receive the right combination of nutrients. 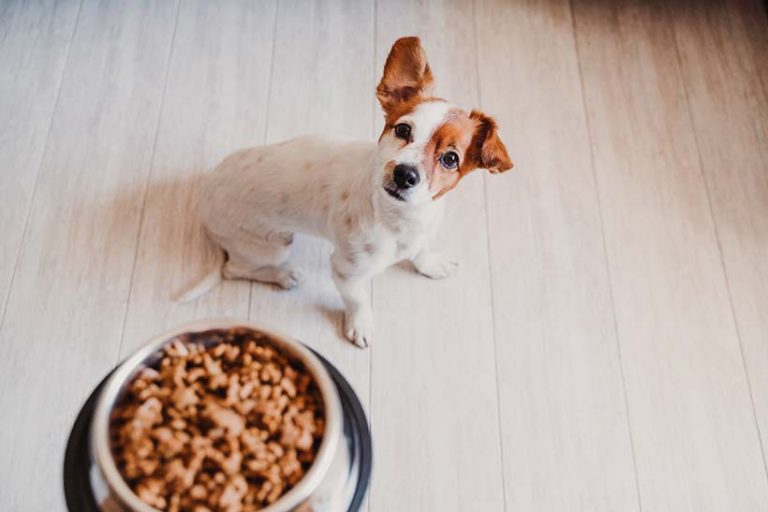 Can something go wrong?

If you want to switch your dog’s food, do it gradually – at first add just a little bit of the vegan food to their regular bowl. Be patient and slightly increase the amount each week.

If you transition your dog too quickly, it may be a shock to their digestive system leading to vomiting or diarrhoea.

Not every brand is tasty enough for each dog, so you may have to experiment a little.

The same applies to how well your dog will get on with the food. One brand may not be right for them but another may be the perfect fit.

Lastly, vegan dog food may result in slightly less acidic urine in some dogs. To remedy this, it’s good to give your dog some vitamin C foods that help to increase urine acidity3.

Rather than supplements that can easily overdose your dog and make their urine too acidic, it’s best to give your dog some fresh foods daily.

For example, you can feed dogs a couple of slices of sweet red pepper, broccoli floret, a couple of strawberries or a few raspberries.

Got more questions about veganism? Find the answers here:

What plant-based snacks are suitable for dogs?

However, raw vegetables shouldn’t be given as main meals, only as snacks to avoid feeding your dog too much fibre.

Avoid giving your dog avocados, onions, garlic, cherries and grapes (including raisins). All these contain substances that may cause severe illness and organ failure in dogs.

Other fruit is safe and beneficial for dogs but contains the sugar fructose that dogs don’t digest very well so only ever give your dog small amounts.

A couple of apple or pear slices, a few chunks of pineapple or watermelon, a couple of strawberries or a few raspberries or blueberries is ideal.

If they eat too much, it’s not life-threatening but may result in explosive diarrhoea.

Other favourite snacks are those based on peanut butter and there are many easy recipes for dogs online – dogs love them!

Or, of course, you can buy some plant-based treats. 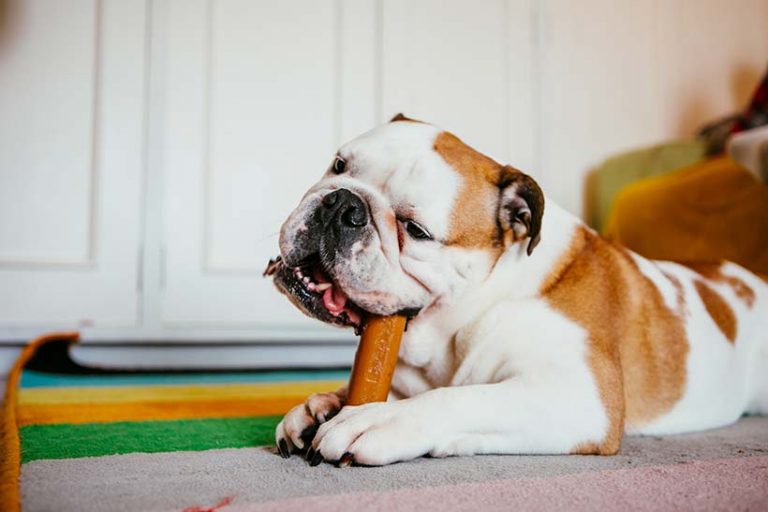 What are the arguments for and against feeding a dog a vegan diet?

One of the pro-vegan dog food arguments is that no dog food is entirely natural.

And not raw meat either, especially not from farmed cows, pigs, salmon, or even chicken.

Truly natural dog food would be wild-caught mice, voles, rats, rabbits, squirrels, small birds and insects, plants, berries, fruit and vegetables, and anything else they can find – oh, and also other species’ faeces!

The pro-vegan argument says that when we can fulfil dogs’ nutritional needs with specially formulated vegan dog food, it’s better than regular commercial kibble that is often made from low-quality ingredients and chemicals.

While we cannot feed our dogs a 100% natural diet, we may as well feed them quality plant-based foods.

With meat-based dog food, there’s always the risk of bacteria, parasites and fungal toxins being present and causing a host of health issues3.

That’s why there are so many dog food recalls every year. The risk is smaller with plant-based foods.

Another argument in favour of vegan dog food is that we shouldn’t place a higher value on the life of one animal – your dog – over another – a farmed animal who loses their life in order to feed your dog.

When we can make sure our dogs get all they need in animal-free dog food, why not do it?

As mentioned above, plant-based dog food is also suitable for many dogs with allergies and food sensitivities.

Many people have reported that their dog’s health has improved since switching to vegan food.

In fact, Lewis Hamilton has credited a vegan diet for changing his dog Roscoe’s life and significantly improving his health.

According to Hamilton, Roscoe is like a puppy again after a vegan diet helped with issues such as breathing and overheating.

What are the arguments against feeding dogs a vegan diet?

One of the arguments against feeding dogs a vegan diet is that their health may suffer without meat.

That’s true only if you don’t give your dog a balanced diet with all the nutrients they need. However, they don’t have to have meat to be healthy.

Another frequent objection is that we shouldn’t impose our beliefs on a different species.

That would be valid if we were actually harming our dogs in the process but if a dog is well-fed and healthy, surely there is no problem?

The only situation when vegan food may not be suitable for your dog is if they have some very specific needs because of a digestive system condition.

Yet even in those situations, combining vegan and non-vegan food can work.

There are reports of vegan dogs living to 20 years, possibly even more but frankly, we don’t have enough data yet to know for sure.

What we do know is that vegan dog food is free from all the mysterious and possibly health-damaging “meat derivatives” and contains anti-inflammatory ingredients that help to support your dog’s health.

What are the best vegan dog food brands in the UK?

There’s a growing choice of vegan dog food brands on the UK market. Some of the best brands are Ami, Benevo, Yarrah, THE PACK, and V-Dog.

Other vegan dog food brands include Solo Vegetal, Omni, and Green Petfood. Greenwoods Veggie also offers plant-based dog food, but these contain vitamin D3 which may be of animal origin. 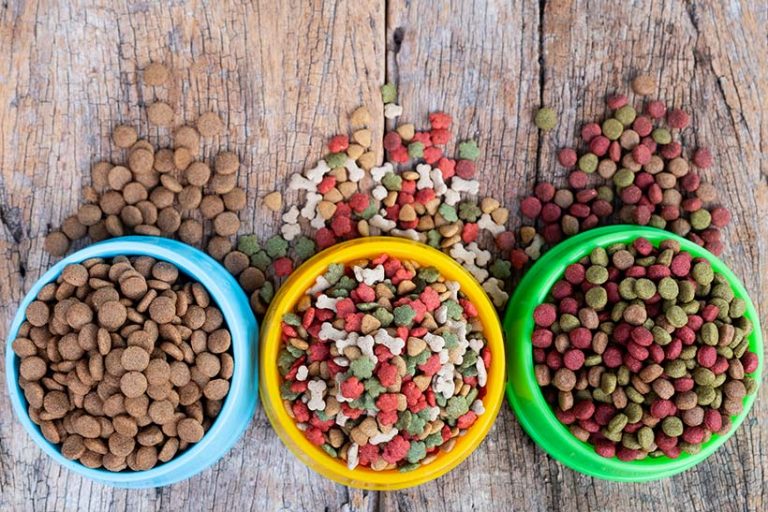 What about vegan dog collars – do they exist?

They do! There are so many choices – from natural to synthetic fabrics, firmly stitched for longevity.

If you don’t want to scrimp on your dog, you can also find collars made from cork or pineapple leather.

Want to treat your furry friend to something delicious?