Fancy a vegan pizza for dinner? Here are all the UK pizza chains where you can buy a vegan takeaway pizza to enjoy at home.

Just a few years ago, vegan takeaway options were the stuff of dreams and there was no way you would have been able to order a vegan pizza to be delivered to your home.

Fast forward to today and large pizza takeaway chains are rapidly adapting to the growing demand for vegan pizzas with the launch of their own vegan takeaway pizza menus that you can enjoy in the comfort of your own home.

Papa John’s paved the way when it became the first major non-vegan pizza takeaway chain to launch vegan cheese in 2019 followed soon after by Pizza Hut with an innovative jackfruit pizza.

After some resistance and multiple trials, even the UK’s largest pizza takeaway chain Domino’s is finally offering vegan pizzas on its permanent menu.

So if you want to have a night off cooking and fancy treating yourself to a takeaway then here are all of the major takeaway chains in the UK who are currently offering vegan pizzas on their menus for nationwide delivery. 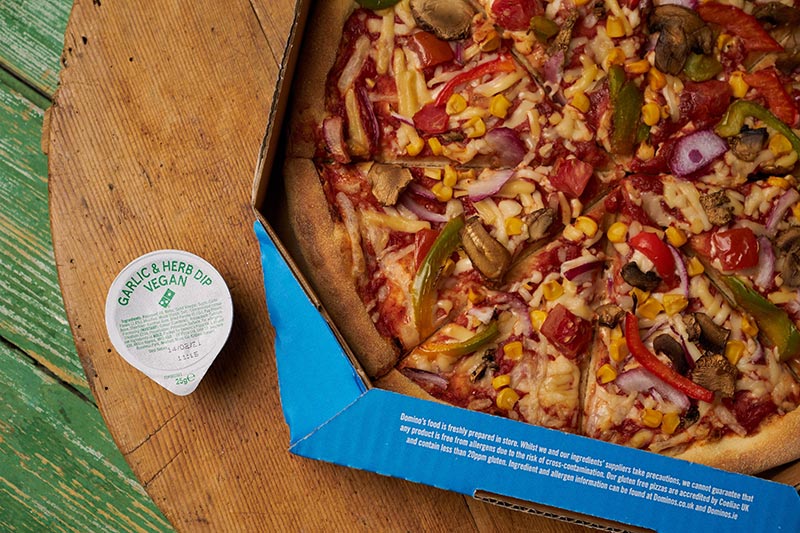 While Domino’s was late to the game when it came to adding vegan pizzas to its takeaway menu, the major chain is now offering two varieties alongside a vegan garlic dip.

The two pizzas on offer are a Vegan Margarita, and a Vegan Vegi Supreme. While not the most exciting flavours, these offerings feature melty vegan cheese and of course, are completely dunkable in the vegan garlic dip.

Fancy a bit on the side? Also vegan is the potato wedges, crusted in seasonings and served with a BBQ dip. 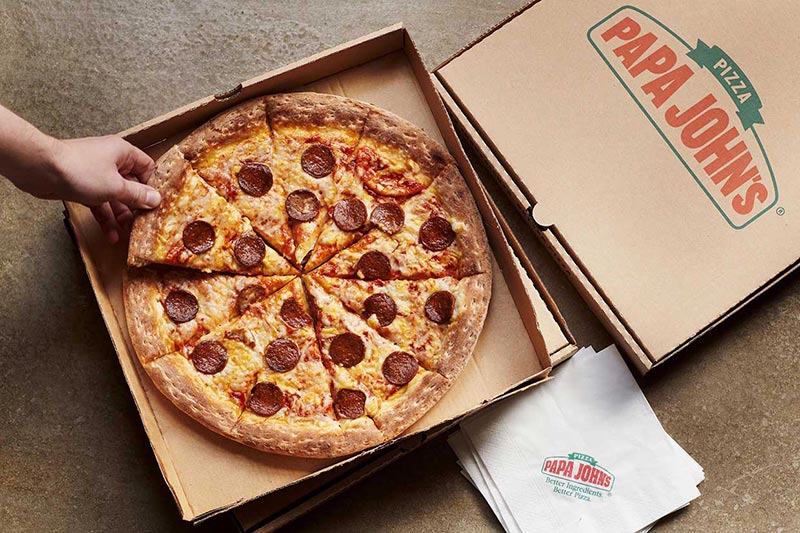 As the first major pizza chain to bring out a substantial vegan offering, Papa Johns has deservedly won a place in many vegan’s hearts.

The pizza giant has several vegan pizzas, including the winner of the PETA Vegan Food Awards ‘best pizza’, The Vegan Works. Other tempting toppings include a classic Vegan Margarita, a spicy addition entitled Vegan Chilli Freak, and a Vegan Jackfruit Pepperoni.

Got a sweet tooth? Papas has launched limited-edition Mince Pie Scrolls in addition to its existing offering of Cinnamon Scrolls and vegan Ben and Jerry’s ice creams.

You can order Papa Johns either through their website or on Just Eat. 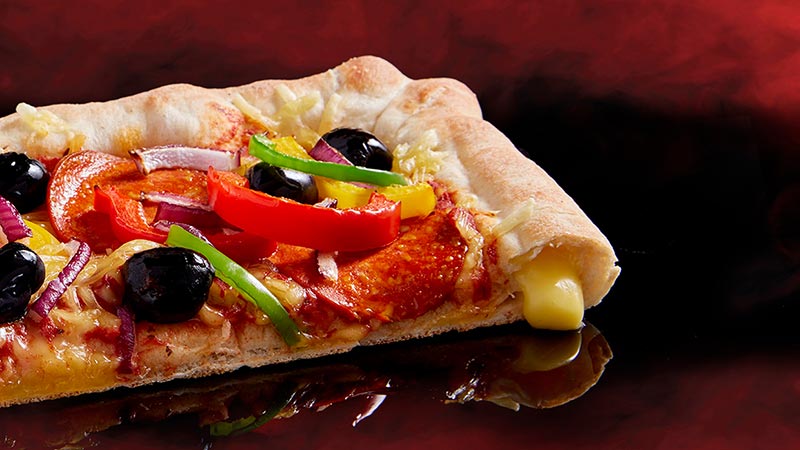 Pizza Hut never used to be the ideal destination for vegans, but in the last couple of years, they have really improved their plant-based offerings.

The chain now has four vegan pizzas to choose from Vegan Margarita, Vegan Pepperphoni, Vegan Virtuous Veg and Vegan Veggie. Pizza Hut even gives you the option of a vegan cheese stuffed crust on your pizza – a first for pizza takeaway chains.

If that wasn’t enough, you can also treat yourself to a side of crispy Southern Fried Nuggets (or Mini Corn on the Cob if you’re feeling healthy).

However, the main selling point of Pizza Hut is their amazing vegan dessert: the ‘I Can’t Believe it’s not Cheesecake’. This crumbly, creamy Biscoff cheesecake is the thing of dreams, and could definitely persuade any omnivore to try vegan. 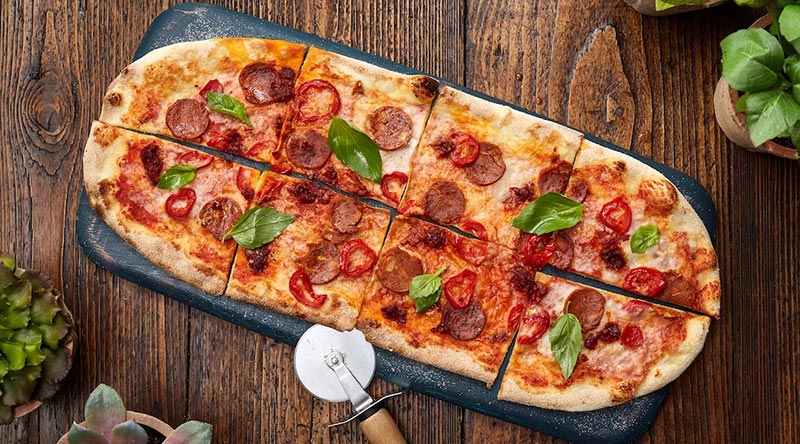 High street chain Zizzi has been providing us with decent vegan options for years, and their pizza is not one to be missed!

Zizzi currently has just two vegan pizzas on offer due to a reduced menu, but that doesn’t mean you’ll be disappointed. They have a spicy Rustica Jackfruit Italian Hot pizza (pictured above) as well as a classic Vegan Margarita. And if you’re somehow not in the mood for pizza after reading this post, they also offer a delicious Lentil Linguine Ragù.

Fancy something sweet after all that cheese? Zizzi also has a Golden Millionaire’s Slice: a chocolate chip cookie base, topped with layers of salted toffee & coconut chocolate ganache.

You can find Zizzi on Deliveroo for delivery, or order for collection from your local restaurant.

Alternatively, Zizzi now sells its Rustica Jackfruit Pizza in Sainsbury’s if you fancy doing a little bit of cooking. 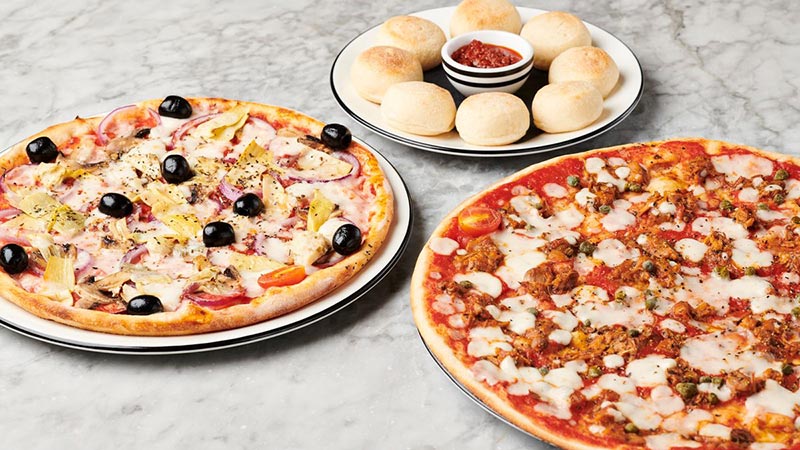 Pizza Express has been a familiar friend to vegans since it launched its first pizza with vegan cheese in 2017.

Now, the pizza chain has five vegan pizzas on offer. Available on their classic or thinner Romana bases, you can choose from Vegan Margarita, Vegan Mezze, Vegan Giardiniera, Vegan Padana or Vegan Veneziana.

Alternatively, you can pick up the Vegan Giardiniera in Tesco and Waitrose while doing your weekly shop. 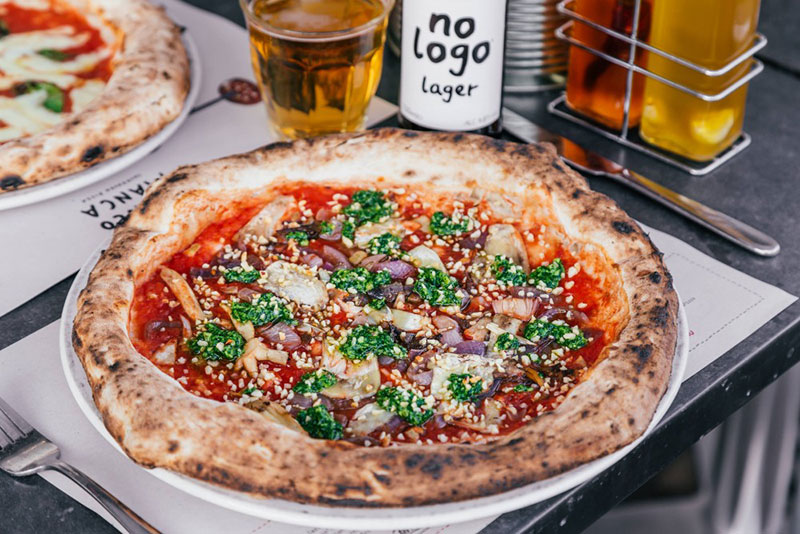 Quirky sourdough pizza chain Franco Manca is located in major cities around the UK and is definitely one to check off the list when ordering vegan pizza.

With the option to change dairy mozzarella to vegan cheese for free, there’s no reason not to try one of their artisan sourdough pizzas.

Each pizzeria has a vegan-friendly special, in addition to their range of vegetarian pizzas which can be made vegan with tempting toppings such as roasted potatoes, san marzano tomatoes and kalamata black olives.

Don’t feel like ordering a takeaway? Find our pick of the best vegan pizza recipes here.