The dark side of dairy: The true impact of dairy-farming on the life of cows

Juliet Gellatley from Viva! looks at the calamitous impact of the dairy industry on the life of cows… 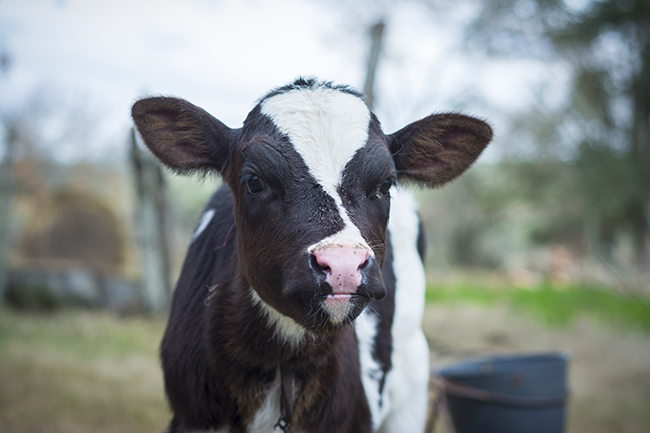 There are a lot of dairy cows in Britain – around 1.8 million to be precise. They couldn’t be more easily identifiable as 90 per cent of them stand out clearly in the countryside with their stark, black and white colouring. These Holstein-Friesian breeds originate from northern Holland and Germany, as their name suggests. There are other breeds as well, such as Jerseys and Guernseys, whose experiences in the dairy industry are identical.

Despite their ubiquitous nature, there is extraordinary ignorance about these intelligent, highly-evolved animals as a recent Viva! survey revealed. Some 60 per cent of people are completely unaware that to produce milk a cow has first to be made pregnant and deliver a baby; and she has to do it every year, year after year.

Like any other mammal, cows produce milk to feed their babies, exactly as we do and they undergo a similar nine month pregnancy. They naturally stop producing milk after about a year, so it follows that each cow has to produce a calf every year to keep the milk flowing – and it’s the gateway to the dark side of dairy.

A belief that cows exist in a kind of bucolic, fairytale world of rural bliss has infiltrated the public’s consciousness. It’s a myth so gross it beggars belief.

Dairy cows are arguably Britain’s hardest working mothers. We humans have taken the wonder of birth and nurturing, stripped them of their magic and corrupted the process into one of constant suffering, both physical and emotional. Over the years, we have interfered with every aspect of this evolutionary process until there is almost nothing left that could be identified as natural.

It begins with pregnancy, which is now almost entirely a product of artificial insemination, administered within days of a cow giving birth, just at the time when her milk is demanded in quantities that are eye watering. On average it is 24.5 litres every day; that’s 42 pints – many times more than she would naturally produce. Instead of being regularly suckled by her calf, she is now milked just twice a day. 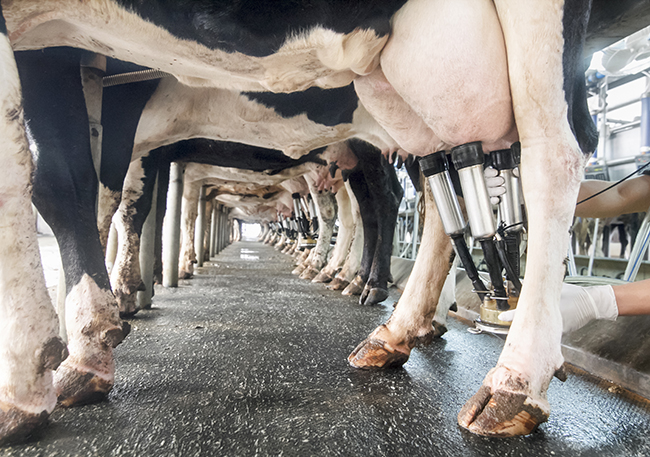 Simple mathematics show that before each milking she will have over 12 litres of milk in her udders, weighing over 12 kilograms – an enormous burden to bare. Just try to imagine the physical strain on her body that will go on for seven months. For some cows it is even worse, the ‘high-yielding’ varieties, who will struggle to cope with a daily burden of 40 litres, 40 kilograms.

These obscene outputs have been obtained through selective breeding, but it never reaches a point where producers are satisfied and say ‘ok, that’s enough’ because it never is enough. In the 1970s, cows produced an average of 12 litres daily and a doubling of that output between then and now has not ended the drive for greater production, greater profitability. It has no end.

Approximately half of all dairy cows are impregnated with bull semen from a beef breed – often bigger, bulkier cattle and as a consequence the calves are bigger and bulkier, leading to painful birthing difficulties. Viva! has filmed calves being jacked out to the bellow of their distressed mothers. It can result in permanent nerve damage to the cow and an inability to control her back legs, which do the splits. The producer’s answer is to fit her with metal shackles. Problem solved!

Nothing is more heart-warming than witnessing the beautiful interaction between a mother and her new-born, whatever the animal. For a dairy cow the euphoria lasts for a day – two at the most – then the cow-hand removes her calf and she never sees it again.

Living near a dairy farm, as I once did, is harrowing as the mother’s bellowing goes on and on and on. Despite the vast quantities of milk she will now produce, her baby can suckle none of it. The process of nurturing, that should last as long as a year, is over for her. Even the brief period she is allowed with her calf is merely to extract her colostrum – to provide immunity for the ones who will live; for those who will die, so it does not taint the milk. 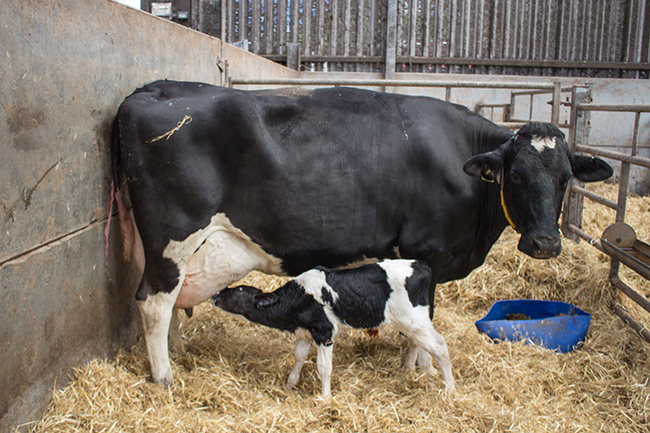 Die? Oh yes, little male calves born from a dairy bull’s semen never put on sufficient weight for the meat market, so they are shot – up to 150,000 of them every year. Many others are sent to veal production units.

The crushing double burden of pregnancy and lactation for seven months out of every 12, inevitably takes its toll. Professor John Webster, of Bristol University’s Clinical Veterinary Science Department, compares this cruel burden to ‘a jogger who goes running for six to eight hours every day, which is a fairly lunatic pursuit’.

This enforced lunatic pursuit results in a string of diseases, the most common of which is excruciating mastitis, a bacterial udder infection which affects almost one third of British dairy cows at any one time – over a million cases a year. It is a direct result of the punishment their udders receive and filthy living conditions inside the barns where they spend the six winter months.

A cow, lying on grass chewing the cud appears to be satisfaction personified, but is anything but. The dairy cow is a distressed animal who simply cannot eat enough pasture to meet the demands on her body – to feed herself, her growing calf and provide vast quantities of milk. In fact, she is in a stressful state of permanent metabolic hunger.

The result is that she ‘milks off her back’, drawing on body reserves. Look at any dairy herd and you will see a coat rack appearance with bones, hips and spine protruding. We are encouraged to drink milk for its calcium, which is something of an irony, for it is the lack of calcium in her own body that kills most cows. And it’s similar with magnesium, most of which passes into her milk while the cow frequently suffers and may die from ‘grass staggers’, a magnesium deficiency.

Injury during birthing, appalling winter housing conditions and huge, pendulous udders that distort leg conformity, frequently result in lameness. A common cause is laminitis and Professor John Webster describes the pain it causes: “…imagine crushing all your fingernails in a door and then standing on your fingertips!” Watch any herd of dairy cows and you’ll always see some hobbling in agony.

As if producers hadn’t demanded enough of dairy cows, they are now encouraging ‘zero grazing’, where animals spend their whole life indoors, tethered to their stalls in some cases.

End of the line

A cow can live into her twenties and her ‘productive’ life starts between 14 and 28 months old, delivering her first calf nine months later. It usually ends when she is six or seven, utterly exhausted and often infertile, such have been the demands of her short, painful and emotionally damaging life. She is slaughtered for low-quality beef, used in products such as pies, burgers, soups and baby food. 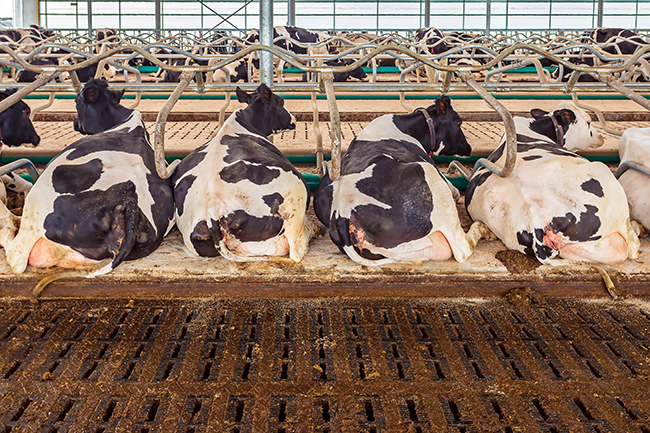 A calf and a half

Viva! investigated 15 dairy farms that supply Cadbury and at one we found a beautiful little calf, just a few days old, bellows incessantly from a stone shed. He is as perfect as he could be – perfectly formed, perfectly healthy. He is distraught because he has just been separated from his mother.

“He won’t be shouting much longer,” says a boiler-suited farmer as a Land Rover and trailer growls up the track. The calf is placed on top of a pile of corpses in the trailer and the only words spoken are: “For God’s sake keep still,” a revolver is placed to his head and he is shot. A little life is extinguished to become food for hounds at the Beaufort hunt. 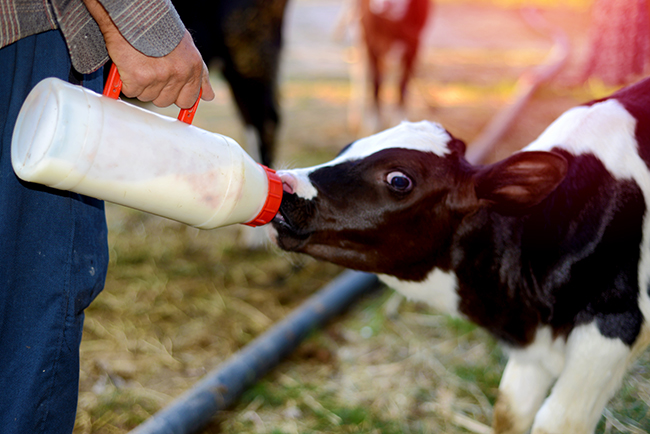 Throughout history, women have been abused and exploited simply because of their sex. They have often been prevented from choosing their mate, had to endure enforced pregnancy, had their children taken from them and have been condemned to a life of drudgery. It reached a peak during the shameful 200 years of slavery, when the establishment encouraged and excused it. Is a cow such a different creature that she does not react in a similar way to a woman to these barbarities?

I cannot understand any woman who continues to inflict this suffering on dairy cows once she knows the true facts. After all, it was outrage that ended slavery, not the establishment. It was outrage that improved women’s lives. So now it is time for everyone to be outraged by what we do to dairy cows – and perhaps it should be women who are leading this.

Viva! is a charity working to promote veganism and to end animal suffering. Juliet Gellatley is a zoologist and a founder and director of Viva! www.viva.org.uk