The best vegan restaurants in the UK

The rise in popularity of veganism over the past five years has seen an explosion of independent vegan restaurants in the UK, as well as chains offering a much bigger range of vegan dishes.

Whether you’re looking for a quick sandwich or a special meal, there’s something for every occasion and every preference of cuisine.

Here’s our guide to eating out at vegan-friendly restaurants in the UK – not all of them are exclusively vegan, but all of them offer some delicious dishes to enjoy.

With a city the size of London, it’s no surprise that you’re spoilt for choice when it comes to vegan restaurants. From street food and world cuisines like Chinese, Indian and Mexican to burger shacks and cute cafés selling delicious plant-based cakes, there are vegan restaurants for everyone.

One of the most famous is Mildreds, which opened in Soho in 1988. This small chain of bustling restaurants serves up flavours from around the world, all with a plant-based twist.

You can find Mildreds restaurants in Camden, Dalston, King’s Cross and Covent Garden as well as Soho.

Unity Diner is another place worth seeking out. Tucked away in Spitalfields, Unity Diner was founded by activist Earthling Ed and all profits go towards running his animal rescue sanctuary, Surge Sanctuary.

Tuck into ‘prawn’ tempura, loaded fries, ‘lobster’ rolls and tempeh sticky ribs. There’s even a cocktail named ‘The Tears of Piers Morgan’ to add a little fun to your night!

And if you’re looking for a real treat, check out vegan restaurant Holy Carrot in upscale Knightsbridge. Here, innovation is the order of the day, so expect high-quality ingredients presented in new and exciting ways. 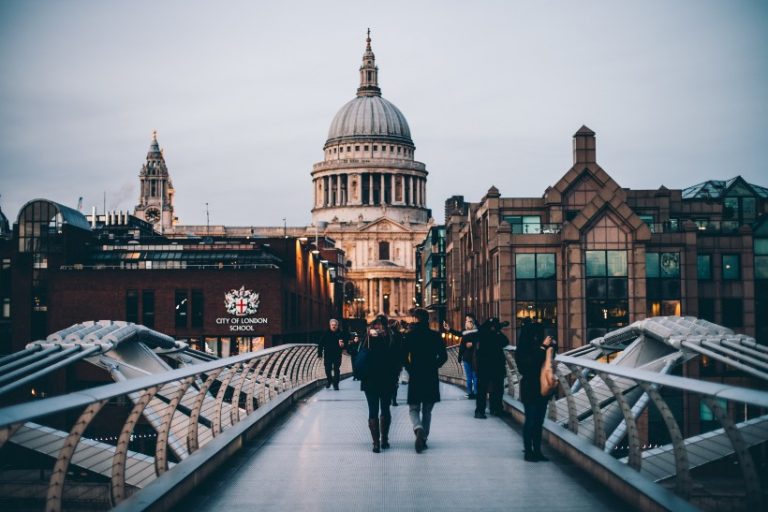 Head to London and check out some of the UK's best vegan restaurants! Credit: Anthony Delanoix

Manchester might not be famous for its vegan restaurants, but you won’t be disappointed by its offerings. From cafés and diners to more upmarket eateries, there’s hidden gems around every corner.

If it’s vegan junk food you’re craving, try Doner Summer. Stuffed with the likes of garlic chilli ‘chicken’, pickles and salad, these impressive kebabs are bursting with flavour and will satisfy even the biggest of appetites.

Ortica Italian Plant-Based is a real find, too. This independent, family-run restaurant is the place to go for authentic vegan pizza and pasta – all served with a smile and perhaps even a classic Aperol Spritz.

And as if that wasn’t enough, Ice Shack is a fully vegan dessert parlour – yes, you read that right. Choose from a vast list of treats including cakes, cookies, ice creams and waffles in every flavour you can imagine.

Known for its imposing castle, sweeping views and historic Old Town, Edinburgh is the capital of Scotland and a beautiful city to visit at any time of the year.

But are vegans well catered for? Well, you may be surprised to hear that one study ranked Edinburgh as the best city for vegans in the UK!

In fact, it has around 200 vegan-friendly restaurants in total – from cosy cafés to street food stalls and fine dining vegan restaurants.

If you’re looking for a healthy start to the day without compromising on flavour, make your first stop Grams in Stockbridge. This pretty pink café serves up the most beautiful raw cakes, oat flour waffles, protein pancakes and a brunch menu to die for.

It’s not a fully vegan restaurant, but there’s a whole lot of deliciousness to choose from if you’re plant-based.

Seeds For The Soul

Seeds For The Soul is another must-visit. The only problem is what to choose from the extensive menu! Highlights include the Mac and Cheese Burger, Tofu Satay Bowl and ‘Chick N Chorizo’ flatbread. The restaurant also offers a range of vegan seafood.

But for those wanting something a little bit fancy, head to The Royal Mile, where you’ll find vegetarian restaurant David Bann. Enjoy soft lighting, beautiful presentation and unusual flavours in this intimate eatery, where many options are vegan or can be made vegan-friendly. 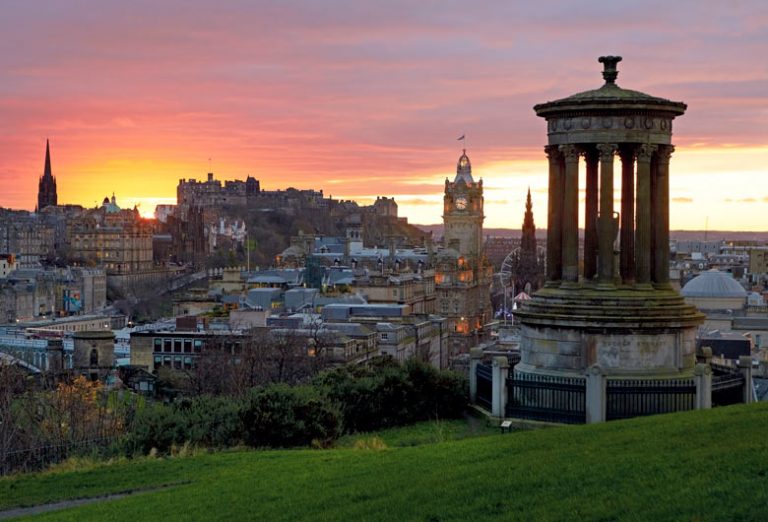 Characterised by its famous pier, vibrant culture and independent eateries, Brighton is a mecca for vegan food. Even the small street corner cafés and coffee shops cater well for vegans here.

If you’re out shopping, be sure to pop into the Happy Maki vegan sushi bar for a quick bite. There’s a huge choice available but we recommend the hoisin ‘duck’ or crispy ‘cod’ tartar sushi wraps and the mango satay ‘chicken’ sushi bowls. This is vegan sushi at its best!

Local, organic food important to you? Make sure you book into Food for Friends. Running since 1981, this beautiful restaurant serves up everything from mapo tofu to aubergine kofta.

Or how about a quintessential afternoon tea by the seaside? Not only does The Grand Hotel offer beautiful décor, but its award-winning afternoon tea includes a selection of vegan savoury pastries, sandwiches and fruit scones with coconut cream.

Often referred to as The Vegan Capital of the World, Bristol boasts an eclectic mix of cafés, bars, restaurants and late-night eateries brimming with plant-based delights!

As a city with a history of alternative culture, vegan food is nothing new here and you’ll find a blend of traditional vegan cafés and contemporary dining experiences.

Make sure you put Koocha on your list to visit. This Persian restaurant offers the most colourful, authentic selection of nutritious, plant-based mezze. Choose from the likes of eggless kookoo, okra fries, kebabs and stews – a feast for the eyes as well as the taste buds!

In the mood for something a bit naughty? Oowee Vegan is a must-visit for its mouth-wateringly good fast food. The famous Oowee burgers are stuffed with vegan beef or chicken, cheese, pickles and garlic mayo, whilst the loaded waffle fries are sensational too.

No visit to Bristol would be complete without sampling some of the local Jamaican food, so be sure to check out Fi Real, whose owners won a recent episode of Come Dine With Me: The Professionals. Try the jerk tofu and you’ll want to go back time and time again. 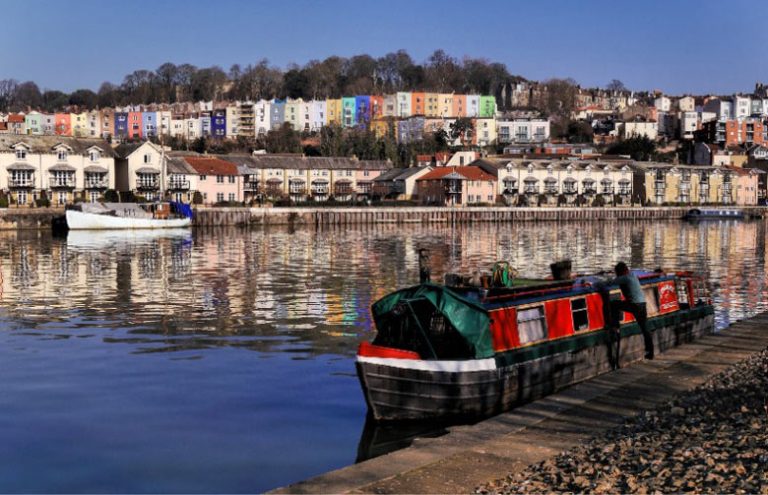 Bristol is one of the best cities for independent vegan restaurants. Credit: Andy Newton

Like other major cities, vegan restaurants in Birmingham have increased along with demand over the past five years, and whilst the pandemic saw some vegan restaurants close, others took the opportunity to open.

The Vegan Kitchen was one of those, having started out as a street food stall at local markets. What does it have to offer? The most impressive vegan burgers you will ever see, including seitan patties with homemade katsu sauce and crispy shroom burgers with bacon and cheese.

The Warehouse Café and Bar

The Warehouse Café and Bar Cooperative is an old-school vegan institution in Birmingham. Head here for vegan ‘fish’ and chips, burgers, chips, music and debate nights.

With a tagline of ‘Humane food’, Ba Ha is full of character and offers the best vegan roast in the city. Think Guiness-marinated jackfruit, Guiness gravy, stuffing balls and Yorkshire puddings. Shall we move to Birmingham?

This thriving, forward-thinking city is well loved for its historic docklands area, bustling shops, museums and parks. And, of course, its football team and The Beatles!

But Liverpool is also a fantastic place to visit for vegan restaurants. Whether it’s an ethical café or a junk food takeaway, you just need to know where to look.

Down The Hatch on Duke Street has a menu that’s 80% vegan. Locals love the seitan burgers, the mushroom or ‘chicken’ po boys and the loaded baskets. Make sure you grab a serviette – things could get messy!
It’s also worth checking out the Duke Street Market, which is home to a host of independent traders serving world cuisine.

Elsewhere, Woo Tan Scran is an entirely vegan Chinese takeaway. Hurrah we hear you cry! At last ,you can enjoy vegan versions of favourites like sesame ‘prawn’ toast, crispy ‘beef’ and sweet and sour ‘chicken’.

If it’s just a spot of excellent brunch you’re after, The Vibe in L1 is a dog friendly, plant-based café serving vegan full English breakfasts and even vegan eggs. 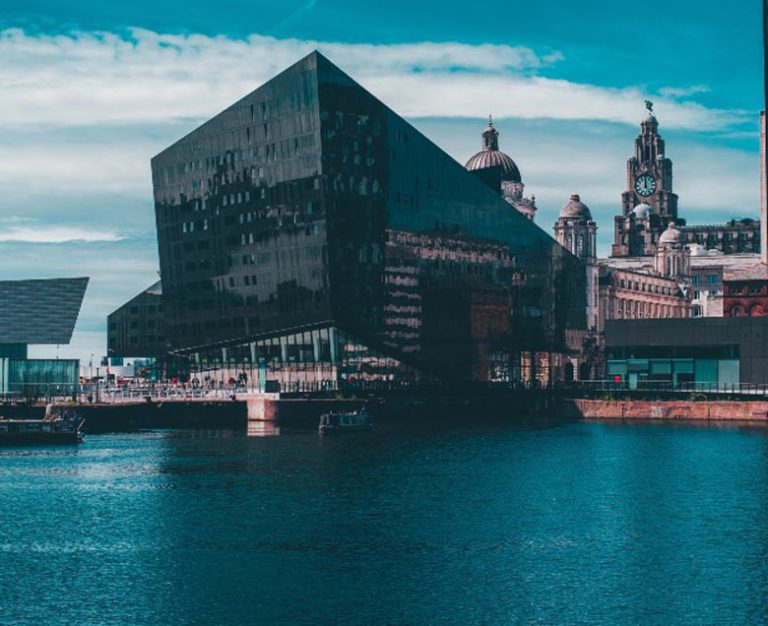 Whilst we all love to support independent vegan businesses as much as possible, it’s not always practical. So we’ve rounded up all the vegan options at chain restaurants so that you can make the right choice next time you’re on the road.

If you’re just looking to grab a quick bite on the go, McDonald’s has increased its vegan options over the past couple of years. The McPlant burger has been a huge hit, too! However, you’ll still find it a bit limited.

It took a while, but Burger King has finally got a good selection of vegan food available in its restaurants now. And in 2021 it even trialled a fully vegan restaurant in Leicester Square!

Be aware that the Plant-based Whopper is cooked on the same griddle as meat burgers, which could sway your choice.

When you need convenience food, chains like KFC can offer an easy place to stop. The chicken giant has been fairly late to join the vegan party, but following a sell-out success of its trial vegan chicken burger in 2019, the KFC Vegan Burger is now a permanent fixture on the menu. 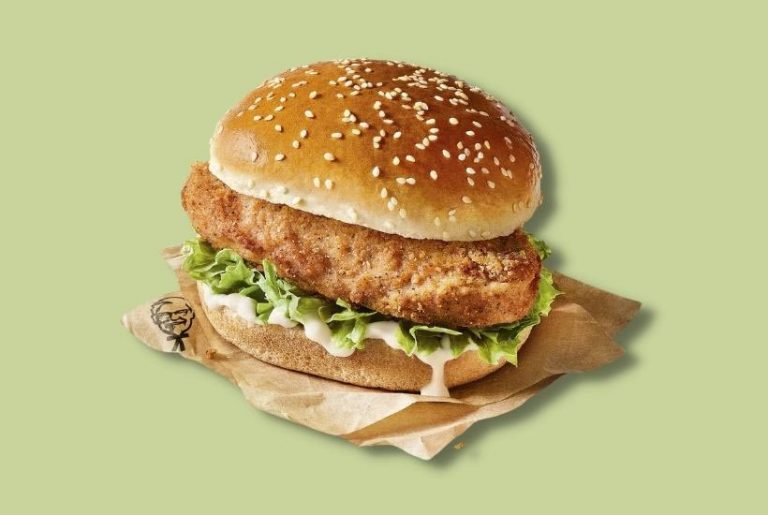 The KFC Original Recipe vegan burger is made with Quorn and comes with vegan mayo. Credit: KFC

If you’re eating out in the city, chicken restaurant Nandos might not be your first port of call. But if you find yourself in need of a quick bite or you’re with non-vegan friends, there are a lot more options available at Nandos than previously.

A few to try include:

From starters and sides to big bowls of noodles with mock meats, there’s something for every appetite. They even offer a vegan egg!

A few of our favourites are:

Following the success of its Vegan Giardiniera in 2017 and Sloppy Vegan in 2021, Pizza Express has hugely increased its vegan offering over the past year and now has a completely vegan menu.

A quick overview of some of the options includes: 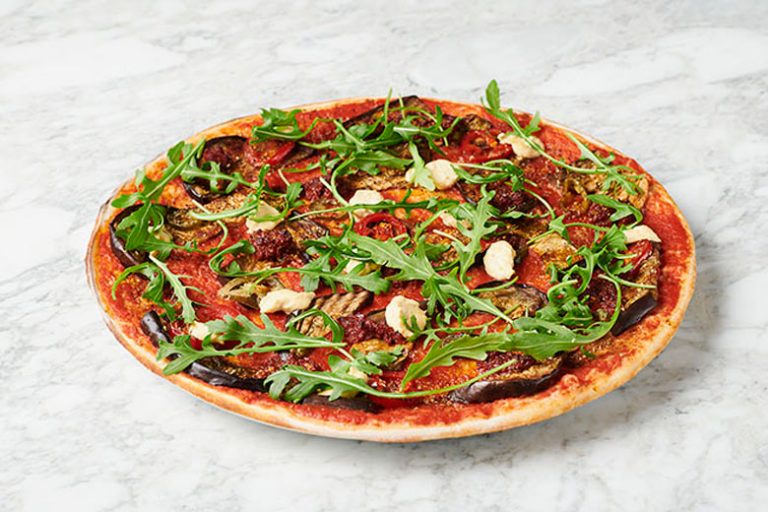 First on the UK high street to launch a jackfruit pepperoni pizza into its restaurants, Zizzi offers a decent selection of vegan starters, mains and desserts. The menu is ever evolving too, meaning new options regularly pop up.

Some of the current favourites include:

Following their first foray into the vegan market with the launch of the Greggs vegan sausage roll in 2019, Greggs has continued to surprise us! Perfect for a quick snack or cheap lunch when you’re out shopping, Greggs has a variety of hot and cold food to choose from. 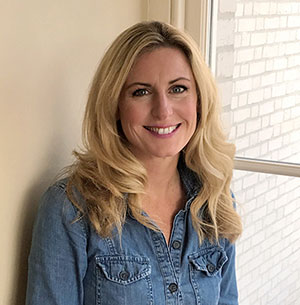