Soya think you know it all? Here are the facts about soya you need to know

Dr Justine Butler, Senior Researcher at Viva! Health, gives you all the facts about soya and what it really does to your body.

No other plant food divides opinion like soya – some champion its health and nutritional benefits, others say it should be avoided at all costs.

Why are there so many scare-stories surrounding this humble bean and is there actually any truth to them? Here are the facts about soya.

Soya beans are the seeds of the legume, or pulse, glycine max.

Historical records show that they were first cultivated around 3,000 years ago in China and were then gradually introduced in other parts of Asia. In the 18th century, they were brought to the USA and more recently, to Europe.

Many of these use the whole bean and are healthier than foods based on soya protein isolates. To extract protein from soya, the beans are heavily processed and lose some nutrients along the way.

Meat substitutes based on soya protein isolate, or textured vegetable protein (TVP), still provide a low-fat source of good protein, but are not as healthy as tofu or tempeh.

Soya is a great source of protein, containing all nine essential amino acids (protein building blocks) and providing more protein than most other pulses. It’s also a good source of polyunsaturated ‘good’ fats (including omega-3 and -6), disease-busting antioxidants, B vitamins and iron.

Calcium-fortified soya products, such as soya milk, yoghurts and tofu, provide significant amounts of this important mineral. Soya (edamame) beans and products like tempeh, made using the whole bean, are a good source of fibre, which is important for maintaining bowel health and can lower cholesterol.

Why is soya good for you?

Soya protein can also lower cholesterol levels and therefore is good for your heart health. One thing is certain, you are better off eating soya foods rather than taking supplements extracted from soya, which could be far less healthy.

Soya may also help combat menopausal symptoms, with early studies in Japan finding that women who consumed the most soya had fewer hot flushes compared to those consuming the least.

Many other studies now show that the regular consumption of soya can reduce the frequency and severity of hot flushes and may help reduce other menopausal symptoms too.

So this all-rounder packs a great nutritional punch and offers a range of health benefits! Why, then, are so many people worried about it, what are their concerns and is there any truth behind them? 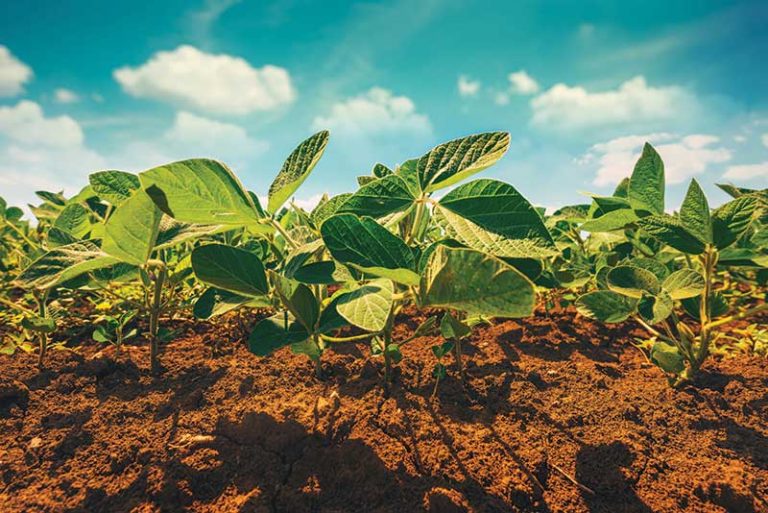 Their chemical structure is similar, but not identical, to the oestrogen found in animals, including humans.

However, they are 100 to 100,000 times weaker and therefore have very little oestrogenic effect, if any. They may even normalise oestrogen signals in people with high levels of this hormone by binding to and blocking the receptor.

Studies on humans concur that phytoestrogens from soya foods are completely safe.

In fact, men may even benefit from eating more as studies suggest that soya consumption is linked to a lower risk of prostate cancer. And let’s not forget, cow’s milk and dairy products contain actual oestrogen!

Of course, breast is best, but for women who can’t breastfeed, soya-based infant formulas offer a safe alternative, providing similar patterns of growth, bone health and metabolic, reproductive, endocrine, immune and neurological functions to those observed in breast-fed infants.

Despite this, the anti soya brigade maintains that soya formulas can disrupt sexual development and fertility.

In the US, millions of babies have been fed soya formula over the last 40 years with no adverse effects. The UK government conducted an in-depth review examining the effects of soya and found no evidence that people who regularly eat high quantities have altered sexual development or impaired fertility.

The scare stories are based on animal experiments, which bear no relevance to humans as phytoestrogens behave differently in different species.

Many of these experiments were based on injecting animals with high doses or force-feeding them excessive amounts – again, no relevance. Despite this, official guidelines say soya formula should only be used if it’s been recommended by your health visitor or GP. 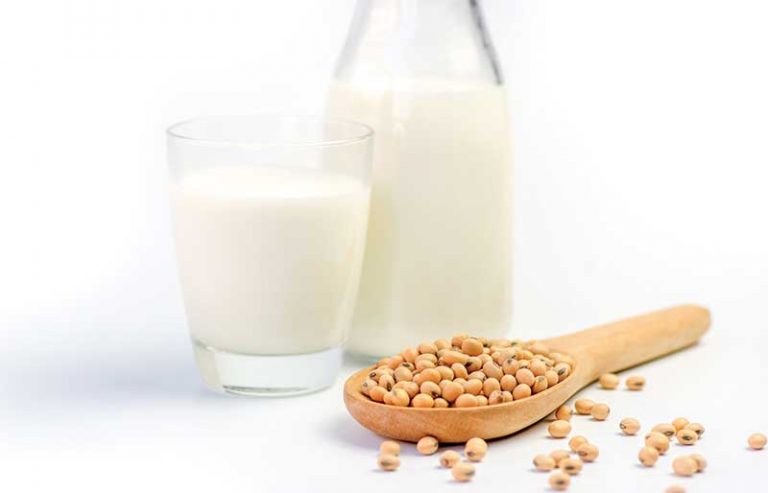 Some people think the potential oestrogenic effect of soya phytoestrogens could lead to, or worsen, breast cancer.

Research shows the opposite to be true, showing that soya consumption in early life, by children and adolescents, lowers the risk of breast cancer later in life.

Eating soya after a cancer diagnosis may well reduce recurrence and improve survival. The amount consumed in some of these studies showing protective effects was around 11 grams of soya protein per day – equivalent to one and a half servings of tofu or soya milk.

This word tends to be bandied about by people pushing fad diets rather than nutrition scientists. In the case of soya, they are usually referring to phytate, a natural antioxidant found in pulses, whole grains, nuts and seeds.

It has several health-protective properties, but critics have focused on its ability to bind to and reduce absorption of some minerals such as iron and zinc.

Soaking, cooking and fermenting reduces the phytate content and soya is always cooked, and often fermented, before consumption, so the effect of phytate is negligible.

It has been suggested that soya foods (or soya isoflavones – natural substances found in soya beans) can disrupt thyroid function.

These fears are based on animal experiments, while human studies consistently show that neither soya foods nor isoflavones have any adverse effects on the thyroid. These findings are in agreement with the positions taken by the European Food Safety Authority and the US Food and Drug Administration.

While there’s no evidence that soya impairs thyroid function in healthy people, those who are consuming sufficient iodine, there was a concern it may be a problem for people with low thyroid function or hypothyroidism.

However, researchers say that hypothyroid patients need not avoid soya foods – perhaps just limit consumption to a moderate level if you are still concerned.

For those taking thyroid medication, soya, as well as many other foods, drugs, herbs and supplements, may inhibit its absorption.

One way of mitigating this is to separate the time you take the medication from when you eat (which is, of course, easier to achieve in adults than with infants). Try leaving 1-3 hours after taking the medication before you consume any soya foods. 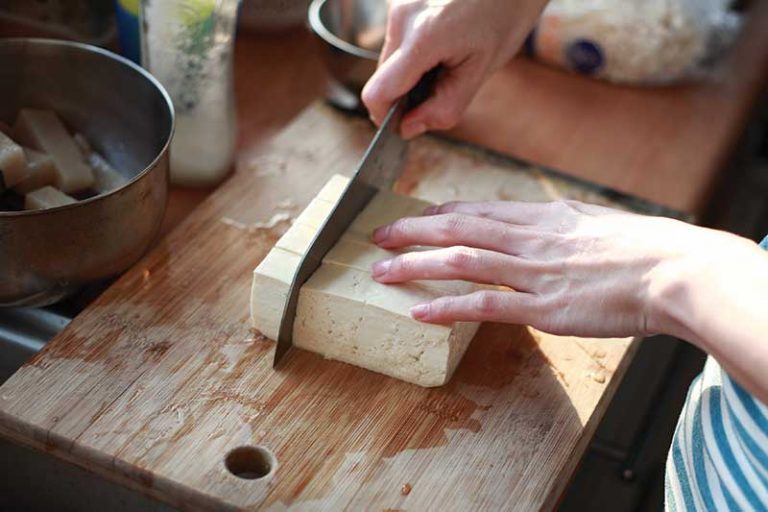 Myth 6: Vegans are destroying the rainforest

When the US began running out of suitable land for expansion, soya began its long march into South America. Currently around 80 per cent of global production (270 million tonnes per year) comes from just three countries – the US, Brazil and Argentina.

It is big business, but not for human consumption, as most of this soya is grown for animal feed. The relentless expansion of soya production is an environmental disaster – but it’s not because of vegans!

More than 90 per cent of the world’s soya production is fed to livestock – cows, pigs and chickens – so that people can eat meat, dairy and eggs.

Most of it comes from the Amazon and other places facing environmental destruction, with only around six per cent of global soya production being eaten by humans.

Many of the soya foods consumed in the UK are made with organic beans sourced from Europe and the US, unlike the genetically modified types grown for animal feed.

If you want to see less destruction of the rainforest, switch to a vegan diet and eat more soya!

The decision to go vegan is better, not just for the animals and the rainforest, but also for all the other environmental catastrophes linked to livestock production – expanding deserts, soil degradation, global warming, nitrogen pollution, antibiotic resistance and superbugs.

In summary, soya is a healthy and nutritious food that provides a great source of protein, healthy fats, vitamins and minerals as well as lowering the risk of many diseases.

If you want to save your health as well as the planet, swap that beef steak for braised tofu.

Viva! Health is part of vegan charity Viva! It monitors scientific research linking diet to health and provides accurate information on which to make informed choices about the food you eat. www.vivahealth.org.uk