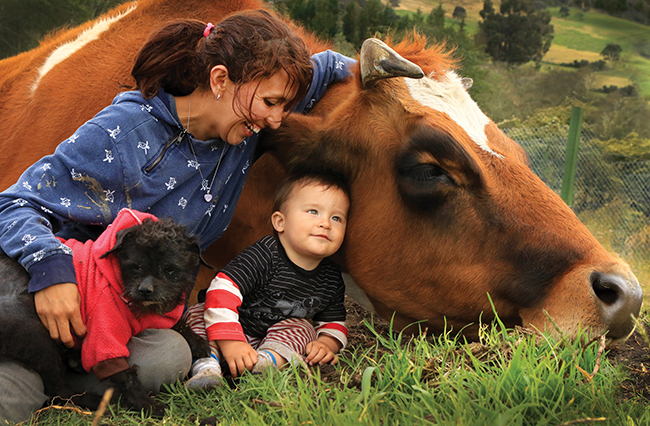 If you ever find yourself overwhelmed by all that is wrong in the world, or feel like you are battling alone, I’d recommend you visit the wonderful Unbound Project. It’s a multimedia documentary project, founded by acclaimed photographer Jo-Anne McArthur, which celebrates the lives of women at the forefront of animal advocacy – from veterinarians and scientists to rescuers and activists. It has to be one of the most inspirational projects you will ever come across! Among its incredible stories of bravery, commitment and empowerment, are these three extraordinary women…

When she was seven years old, Juliana found a little white dog on the streets of Colombia. He was dirty and hungry, and so she scooped him up and carried him home. She named him Copito.

More rescues followed, including dogs, cats, birds and rodents. She even once brought home an abandoned little boy – street children are not uncommon in Colombia – whom she fed in her room for days before her mother discovered him. To Juliana, it was all the same: if someone needed help, you helped, regardless of species.

Not long after rescuing Copito, Juliana told her mother that she would one day buy a big house and help all the animals in the world. She started selling chocolate and veggie burgers at school to raise money to fund this dream and in 2008, she did it. Juliana’s Animal Sanctuary was founded. 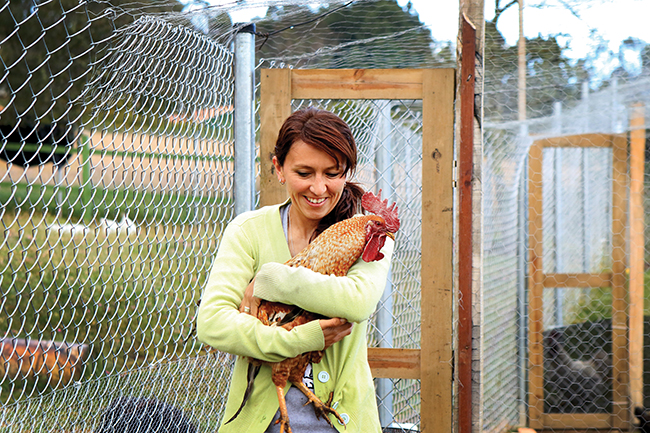 Among the animals who live there are cows, pigs, horses, dogs, cats, rabbits and chickens. One of them is Gita, a cow rescued from a slaughterhouse. When Juliana first saw her, workers were trying to force Gita into submission by electrocuting her. “They were trying everything to break her spirit, but she was determined to maintain her dignity,” Juliana remembers. “Gita is an example for everyone. The animals are my inspiration. Even after so much pain has been inflicted on them, they still come to you with love. They know everything about forgiveness.”

Not only does she care for the residents, Juliana hosts sanctuary visitors, gives talks at local schools, fundraises, and promotes veganism through education, a meat-free Monday campaign and cooking workshops in Colombia and beyond. With only about a fifth of the sanctuary’s costs covered by donations, Juliana helps make up the rest through online work as a Spanish language translator, and she brings in additional money selling handmade jewellery. On top of all that, she runs a local project as part of Food for Life, a global relief organisation that provides vegan meals for the poor. 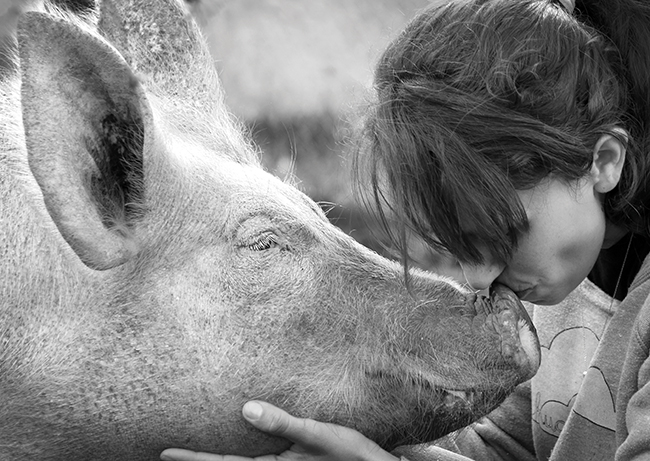 Juliana is a powerhouse. Only in the final week of her pregnancy, when her belly was too big to be able to help feed the animals, did she finally stop. But after 20 hours of labour and the 10pm homebirth of her son, Bhimal, her belly was no longer in her way, so she was up bright and early the next morning, ready to feed the animals.

It is, of course, the animals themselves who keep her going. “They give me the energy to never stop,” she says, and she hopes to inspire others, too. “I live in a poor, crazy country, and I am doing this… Anything is possible.” 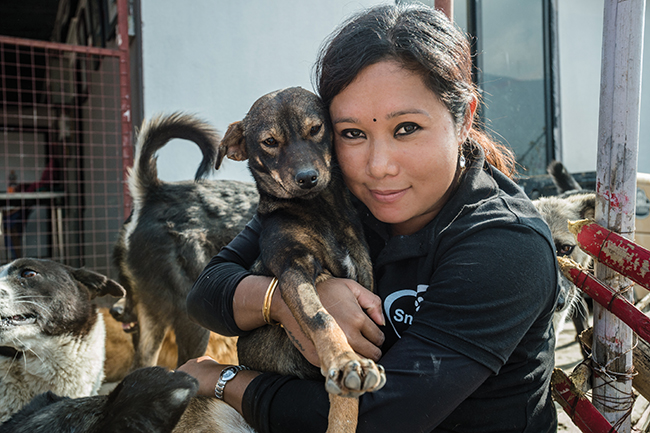 “I wasn’t an animal lover. I wasn’t even a dog lover,” says Sneha as more than a hundred dogs run around her at the shelter she founded outside Kathmandu in Nepal. More than a dozen of the animals are paralyzed from the waist down and many of them are recovering from horrendous injuries — missing legs and ears, eyes and parts of their muzzles — but they’re all barking and playing joyfully, either on their own legs or on specially imported wheels.

Everything changed when Sneha’s husband wanted to get two puppies. Sneha was not at all keen, but insisted that if he were to get them, they must come from a breeder. She didn’t want street dogs in her home. Inevitably, one of the puppies, Zara, stole her way into Sneha’s heart. “She was more than a family member for me,” she says. “She was like a child.” But then the worst happened. Sneha came home one day to find Zara vomiting blood. She had been poisoned by a neighbour who did not like her barking, and despite veterinary care, Zara died four days later. Sneha was devastated. “In Hindu culture, when a family member dies, we don’t eat anything for 13 days. I did this for my dog.” 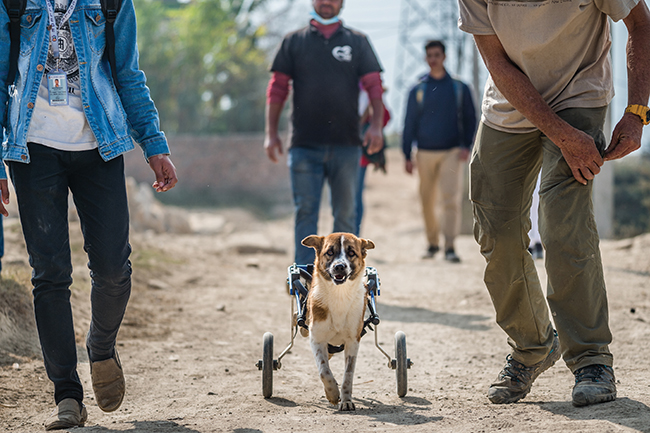 Seeing how Zara had suffered suddenly unlocked Sneha’s empathy for the city’s street dogs. She started carrying biscuits for them, and paying for space at a local kennel so some, at least, could have a safe place and regular meals. Within a month, the kennel was full, and so Sneha sold a house she owned and opened a shelter.

Today, Sneha’s Care has a team of veterinarians and technicians, and welcomes volunteers from around the world. Some dogs will live their whole lives at the shelter, while others are found forever homes. 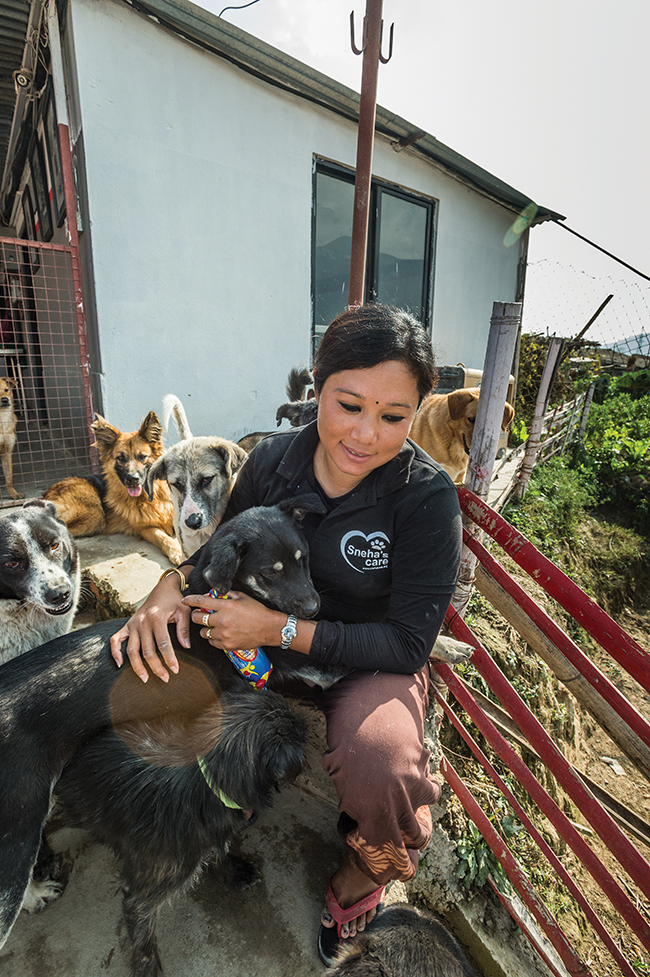 After opening the shelter, Sneha suddenly saw all animals in a new light and became vegan. She is now one of Nepal’s most vocal and visible animal advocates, and has successfully campaigned for the introduction of the country’s first animal welfare laws.

Sneha believes that educating young people is paramount. “I was never taught in school to be kind,” she says, but now she sees local children visiting the shelter and donating their pocket money. “The most important thing is to have humanity. It’s not only people who teach you humanity, I learned humanity from these animals. These animals taught me everything.”

‘Lek’ is Thai slang for ‘tiny’ and her name could not fit more perfectly. Her thin, five-foot frame makes her appear fragile at first glance, but follow Lek into an open field of 2,000-pound, free-roaming elephants and she is transformed into one of the giants. The way the elephants move around her is hypnotizing. They bring her into their space, and into their herd as one of their own.

Lek saw her first elephant logging camp when she was 16 years old, and the abuse she witnessed there set her on a compassionate path. “It’s not right”, she says of the way humans take elephants and break their spirits in order to do their bidding. “They are born for their own reasons. They have a right to stay on this planet.” 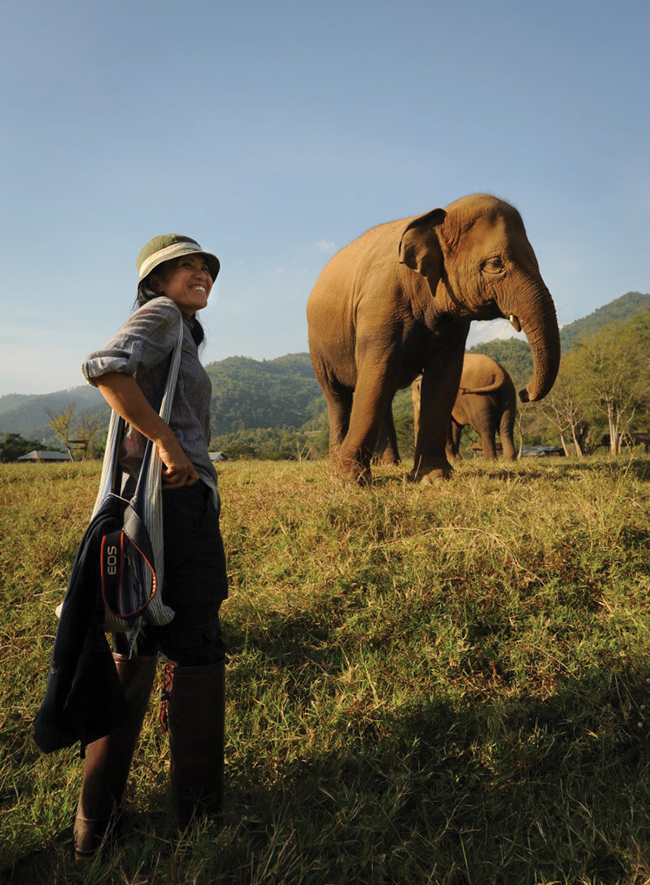 In 1996, Lek founded Elephant Nature Park where she employs former elephant handlers from the tourism and logging industries to care for the sanctuary’s many residents. Tourists also stay and spend a week as volunteers caring for the elephants rather than spend an hour or so riding them or watching them perform. The demand for cruelty-free elephant experiences is slowly – and thankfully – changing the face of Thailand’s tourism industry.

At the sanctuary, Lek addresses each elephant by name as they speak to one another with complete understanding. When the animals get cheeky and push her away from the crowds with their trunks, she laughs and scolds them affectionately, like a mother. She sits beneath their bellies and hugs their strong legs while she sings to them in Thai, and in turn they harmonize above her with deep belly rumbles. It’s only in this moment that you realize you’ve probably never seen a happy elephant before. “They forgive”, says Lek. “They never forget, but they forgive.” 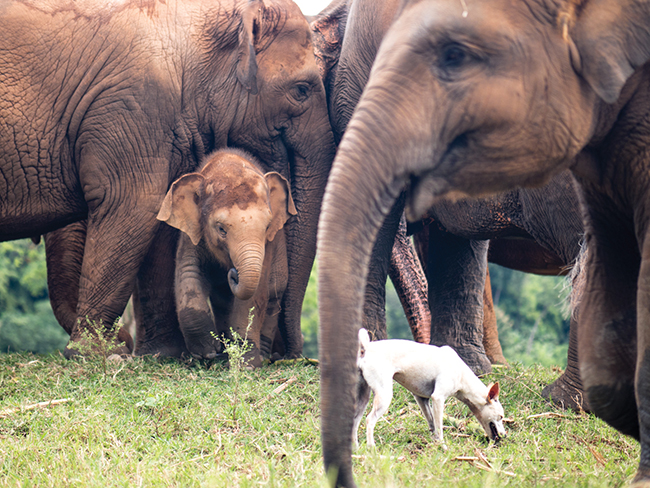 Lek’s sanctuary is also home to a herd of rescued buffalo, pigs, cows, birds, cats, and over 400 dogs rescued from the Bangkok floods, the dog meat trade, or life-threatening injuries on the streets. And even beyond the sanctuary gates, the trees of the surrounding jungle stand tall today because of Lek’s orange Buddhist scarves wrapped around their bases, making them sacred and untouchable by loggers and developers. Actions like these have not been without consequence. Lek lives with the knowledge that there are people actively fighting to ruin her and the sanctuary, and worse, with the memory of the times there have been attempts on her life.

And yet every day, she keeps going. “We cannot hate people,” she says. “It doesn’t matter if they hate us. We have to go and show our love. Our victory is to change them, not hate them.”

To discover more extraordinary stories of women on the front line of animal protection – or to nominate someone you think should be featured – visit unboundproject.org.

This article first appeared in Vegan Food & Living magazine in the September 2019 issue.