We put the Karaca Air Pro 2-in-1 air fryer to the test to create delicious and healthy vegan recipes, but is it worth it? Keep reading to find out...

Vegan Food & Living may earn commission from the links on this page, but we only ever share brands that we love and trust.

Air fryers have taken the world by storm in recent years, becoming the must-have kitchen gadget.

Many people have opted for air fryers as they are more energy efficient and require less oil compared to traditional cooking methods such as ovens or deep frying.

There are hundreds of air fryers on the market available in a variety of sizes, capabilities, and styles, finding the best air fryer for your needs may seem tricky.

We put the Air Pro to the test, reviewing everything from ease of setting up to cooking up delicious vegan recipes. Keep reading to find out what we thought. 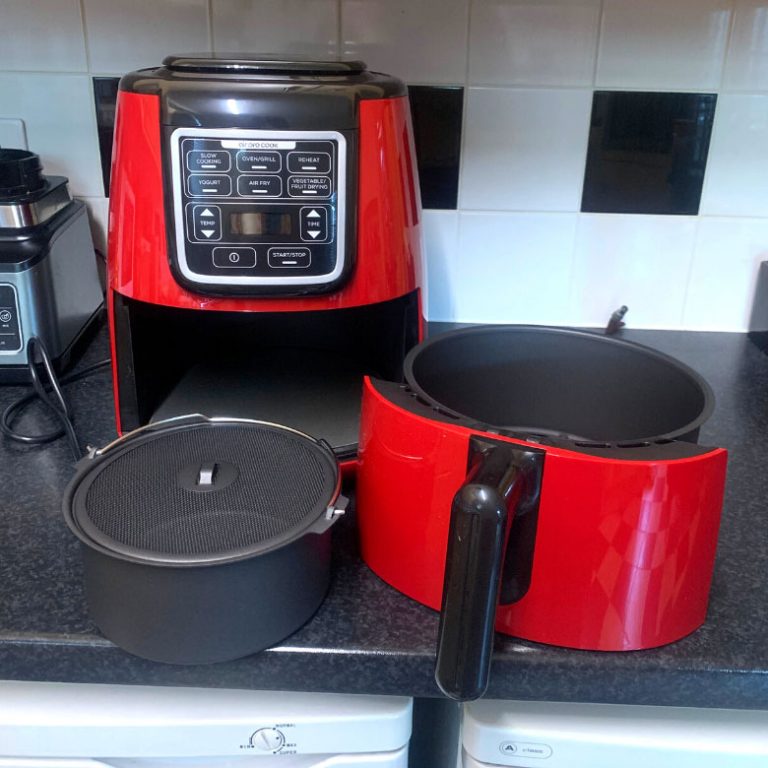 Ease of setting up

Out of the box, the Karaca Air Pro Cook is easy to set up. As well as the large air frying basket and removable drip tray, Karaca’s air fryer come with a pot and splash-proof lid for slowing cooking. The instruction booklet is easy to follow and explains how to get full use of the multi-function air fryer.

The step-by-step guide explains how to set the air fryer up for each function including air frying, grilling, slow cooking, and even yoghurt making. It also includes a cleaning guide and temperature settings for each function. Although, I wish the instructions for the yoghurt making included more details such as what ingredients and quantities were needed.

I did notice that it didn’t come with a recipe book, but there are plenty of air fryer recipes online so this isn’t a major issue.

Once the basket and pot are washed and dried, the air fryer is ready to go. There is a selection of preset cooking functions that you don’t get with traditional air fryers. As well as air frying, the Karaca Air Pro can be used for slow cooking, grilling, fruit and vegetable drying, yoghurt making, and reheating. You can also manually set the temperature and time.

I was particularly excited about the slow cooker function which can cook foods such as stews, curries, tagines, and more. Simply prepare the meal in the morning and leave it to cook throughout the day ready for your evening meal, making dinner times less stressful (and not to mention avoiding the dreaded washing up of multiple pots and pans). This one-pot cooking function will be a saviour for many.

Having these additional functions all in one machine is a great way to reduce your kitchen from being filled with gadgets, especially if you don’t have a lot of space.

I really liked the digital LED clock as it allows you to accurately set the timer and is much more visually appealing. 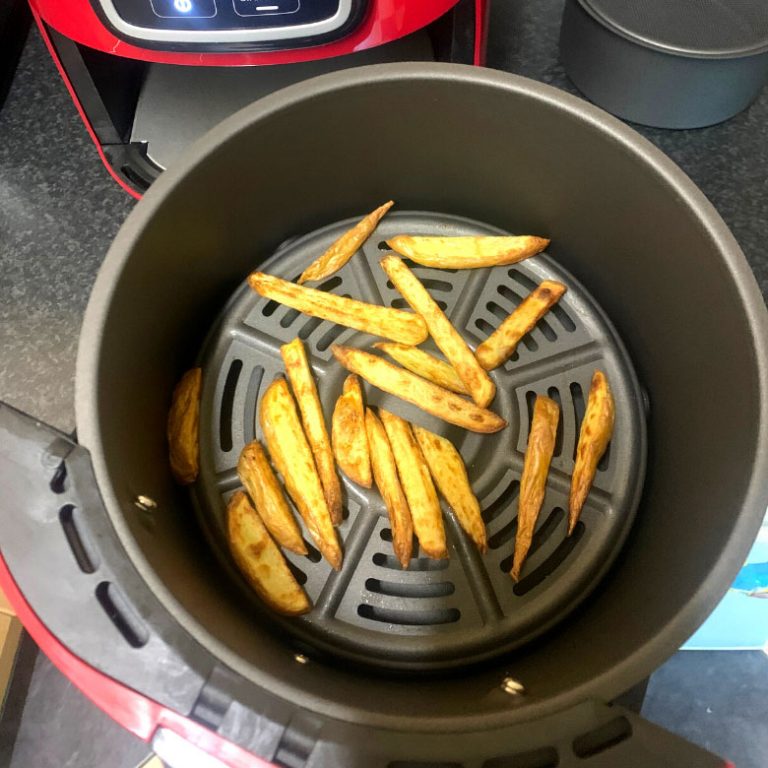 For this test, I just stuck with the air frying function. When judging the Karaca air fryer’s cooking ability, I was looking for 3 things in particular – speed, even cooking, and a crispy texture.

I tested 3 foods in the air fryer to get a better understanding of how well it cooks a variety of foods. I made homemade chips, popcorn vegan chicken, and plant-based bacon.

First up were the homemade chips, I soaked the chopped potatoes briefly to remove excess starch before drying and giving them a light spray of olive oil, I gave the air fryer basket and drip tray a light spray too to avoid sticking.

After 5 minutes of cooking at 200 degrees, I checked the progress of the chips. Already I could see that they were starting to turn golden brown and crisping on the corners. Within 10 minutes the chips were golden, crispy, and ready to eat. They were soft and fluffy in the middle, even though they weren’t pre-boiled.

There was little to no sticking to the basket either, making cleaning easy and quick. 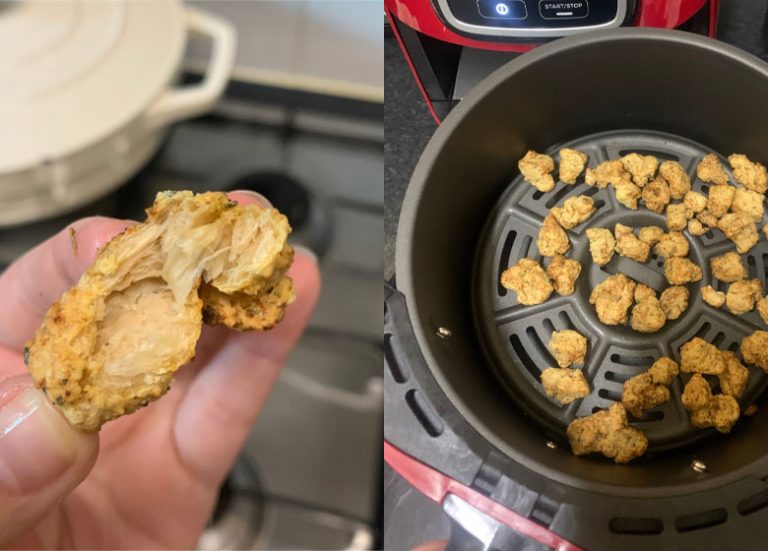 Next was the popcorn ‘chicken’ made from TVP chunks. I was curious to find out if the TVP chunks would stick to the drip tray as the flour coating was a wet mixture.

I set the temperature to 200 degrees and within 8 minutes they were ready. It’s worth noting that the original recipe gives a cooking time of 20 minutes when using a traditional oven. This is because of an air fryer uses a super convection cooking fan that generates hot air which cooks the food faster than gas or electric ovens.

This proves just how energy-efficient air fryers are, not to mention how much money they can save you on your electric bills.

As well as being seriously impressed with the speed of the cooking, I was surprised to see that the chunks hadn’t stuck to the drip tray.

Every piece of popcorn ‘chicken’ was perfectly crunchy whilst the centre was tender.

Finally, I tested the vegan bacon rashers. I turned the temperature down to 180 degrees as I find that plant-based streaky bacon can be notoriously easy to burn which makes it hard and unpleasant.

After 8 minutes the bacon was ready. The texture was evenly crunchy but still had a meaty bite to it which is my preference.

One thing I would point out is that the air fryer fan is quite loud when cooking. I know that this can’t be helped due to the nature of an air fryer however it is worth noting. 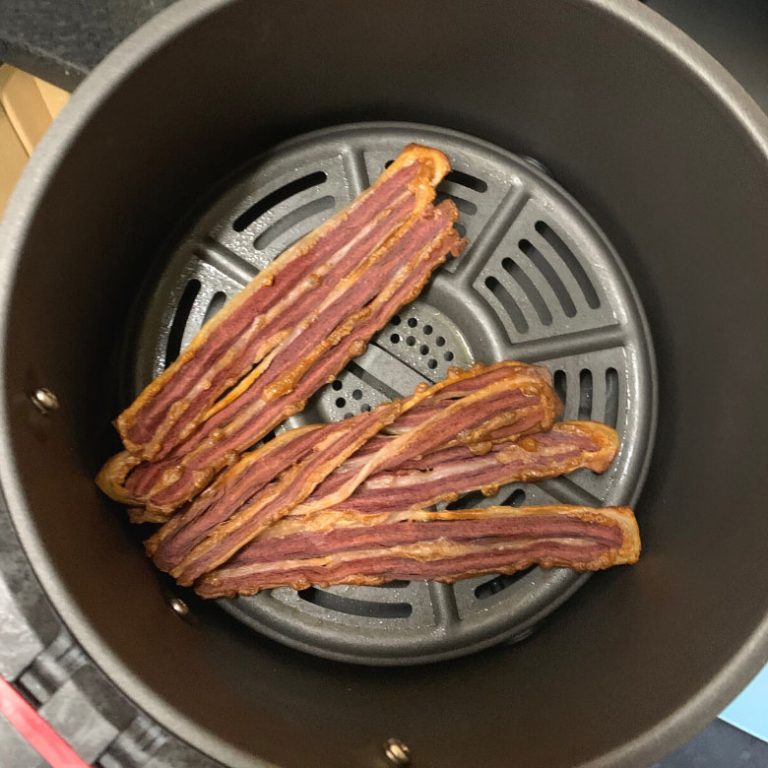 I was seriously impressed with the Karaca Air Pro 2-in-1 air fryer. Not only is it a stylish bit of kit, but it cooks food to a seriously high standard.

The one thing I hate when cooking is my food sticking to the tray and having to aggressively scrape the food off and ultimately butchering it.

Thankfully, I didn’t have this issue with the Karaca air fryer. The non-stick drip tray made cooking easy and not to mention healthy as I had to use little oil.

Additionally, the speed of the cooking was impressive. Within 10 minutes my food was perfectly cooked and ready to eat.

If this is all the Karaca had to offer I’d be happy, but the 2-in-1 air fryer offers multifunctionality making it the ideal kitchen gadget.