Is horse riding vegan? Surely not, but we reveal why there might be grey areas

If you treat a horse with respect and care, is it okay for vegans to ride horses? We take a look at both sides of the debate

Is horse riding vegan? They say there are two sides to every argument, and that’s definitely true with most vegan debates.

Before you make up your mind on some of the most important topics, it’s worth considering all perspectives.

Here we take a look at the question ‘is horse riding vegan?’ Consider the arguments for why it might be and why it definitely isn’t, and then make up your mind for yourself…

To use any animal for our own entertainment is exploitation, and therefore not vegan.

Exploitation does not necessarily mean abuse, it means using someone else for your own benefit.

Jemma Crosby has been vegan for two years. After being involved in dressage for several years as a junior rider, she recently gave up the sport.

She says: “When I became vegan, I stopped riding horses – in the same way I stopped eating animals and wearing wool and leather. When you become vegan, you stop exploiting animals, and that may involve giving up things you have previously enjoyed doing.

“I believe animals are not ours to use. For me to go to a riding school, and pay for the ‘use’ of the horses for a ride meant the horse was being commodified, and someone was profiting from that horse. I don’t think the riding school owners should make money from using that horse, in the same way I don’t think factory farming, for example, should make money from selling meat.”

Horses have rights too

Jemma continues, “For me, veganism is about animal rights, and the steps some riders will take to reduce harm to the horse i.e. not using a metal bit, or a whip, are animal welfare steps. It is better than treating the animal badly, but it does not actually adhere to the vegan ideology.

“I accept that many riders do love horses, and do treat them well. I also believe if someone rescues an abandoned or abused horse, it is good to give the animal a good, safe home. I’m not blinkered, and realise as long as we live in a world where people do use animals, there will always be a need to provide sanctuary.

“But I don’t believe vegans should buy into, or promote that market by ‘buying’ or ‘owning’ horses. Ultimately, using a horse for riding, you are exercising control and ownership over an autonomous, independent animal, and that goes against everything veganism is about.” 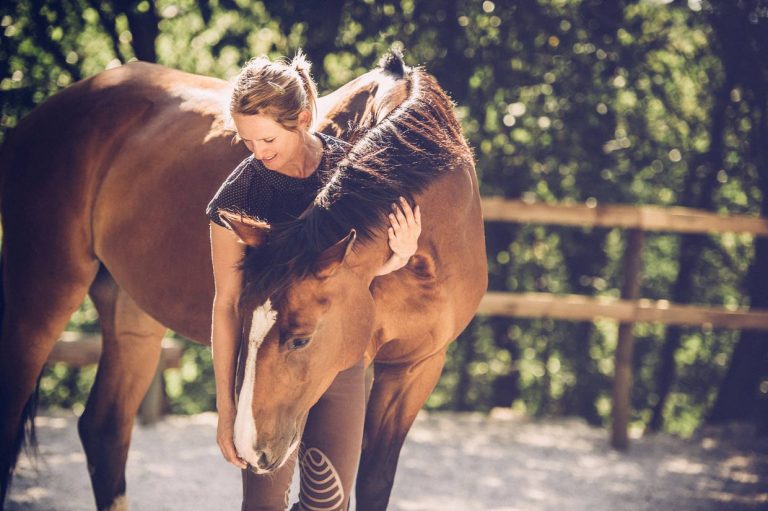 If you care for your horse well, does it make it ok for you to ride it? Image © CasarsaGuru via Getty Images

Riding a horse does not necessarily abuse or exploit that animal. Many riders love horses, and treat those animals with respect and kindness.

Being vegan is about minimising suffering to other living creatures, and if riding horses does not cause the animal to suffer, then how can it go against that basic principle?

Michelle Whitham Jones is a long-term rider. She says: “My husband and I had just decided to move from vegetarianism to veganism when we bought our horses. We believed we were very ethical horse owners because our horses were looked after very well and received a great deal of care and attention from us. Later, we acquired our rescued Mini-Shetland Ben, and nursed his sweet itch scabs with plant-based remedies.

“Our horses do not have metal shoes. We ride without bits because of the harm that they could cause and because I don’t like the thought of metal bits in mouths. We have managed to find a source of vegan saddles and bridles so our horses don’t have to be dressed with leather either.”

Treating horses with love and respect

Michelle goes on to explain, “Our horses live out in four acres all year although they can choose to use a field shelter if they need to. We still treat our horses with the upmost respect and care but we are also safe.

“Our horses can’t choose to communicate with light kicks or bites like they do in the field with each other, we use humane training techniques which never involve whips or pain of any kind.

“My horses are healthy and together we coexist in a very pleasant, cruelty-free way. I am happy to discuss my view of veganism and I am also aware that there may be some dramatic about-turns in the future, but for now, I am a free thinking, liberated horse owning vegan, and I am fine with it.”

So, is horse riding vegan? We’ve presented you with two sides of the argument, now it’s time to decide for yourself where you stand on the subject.

While we’re on the subject of vegan debates, are figs vegan? Discover both sides of the argument