How to reduce your carbon footprint in 10 simple steps

As the old saying goes, “actions speak louder than words” and considering the climate conference COP26 was largely just big words, it’s time for each one of us to take action.

Reducing your carbon footprint is key if we are to prevent catastrophic climate change.

The truth is, every person can make a difference. Individual actions add up whether they cause harm or reduce it.

When you decide to do something about climate change, it doesn’t have to be any dramatic gestures.

Simply by living your life in a more sustainable way means you’re a part of the solution, not the problem.

What is my carbon footprint?

Your carbon footprint is the total amount of greenhouse gases that are emitted as result of your actions.

These gases are causing or contributing to climate change and include carbon dioxide, methane, nitrous oxide and some other gases.

To avoid disastrous climate change, we all need to severely cut our carbon footprint. Some estimates say we need to cut our average emissions by 50%, others say 60% by 2050 – but those are the world average figures.

In practice, it means that many industrialised countries have to cut their emissions by 80%! 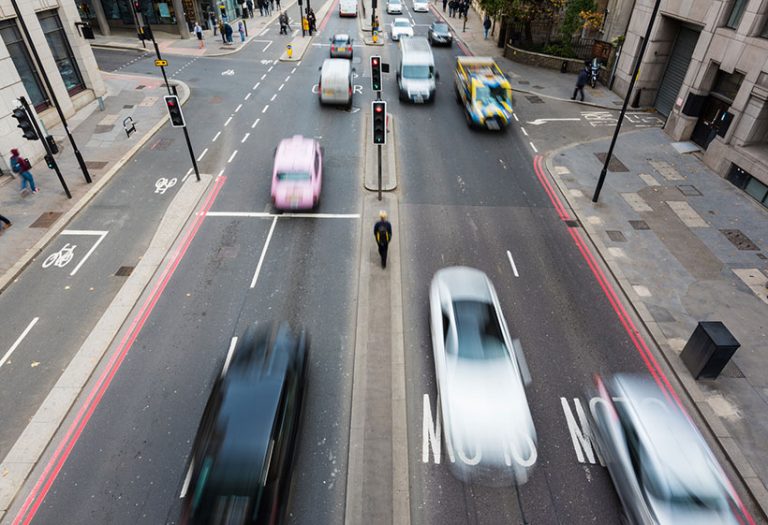 How do I calculate my carbon footprint?

There are many websites offering a carbon footprint calculator – you can try this UK-based one or this global one.

Each of them is slightly different but they all take into account major factors, such as your diet, food waste, how and where you live, how you heat your household, what means of transport you use, how much new stuff you buy and if you avoid single-use packaging.

Want to learn more about how to reduce your carbon footprint? Read these articles next:

How do I reduce my carbon footprint? 10 actions you can take right now

There’s a lot you can do to slash your carbon footprint! Some of these actions are easier than others but every step in the carbon reducing direction matters.

It really is that simple because almost all plant-based foods have a much lower carbon footprint than meat and animal products.

By going vegan, you can slash your food-based emissions by up to 73%.

This is often a tricky one as many of us have to commute and options are limited.

Walking or cycling are predictably the greenest ways to get around. The next best thing is train or coach, followed by driving a full car (four passengers), bus transport and then driving alone.

Flying produces huge amounts of greenhouse gases, so it’s best not to fly but if you have to, flights over 1,000 kilometres actually have a lower carbon footprint than if you were to drive the same distance.

That’s not to say you should fly on a whim! If you can take a train instead, you’ll seriously cut your carbon footprint. 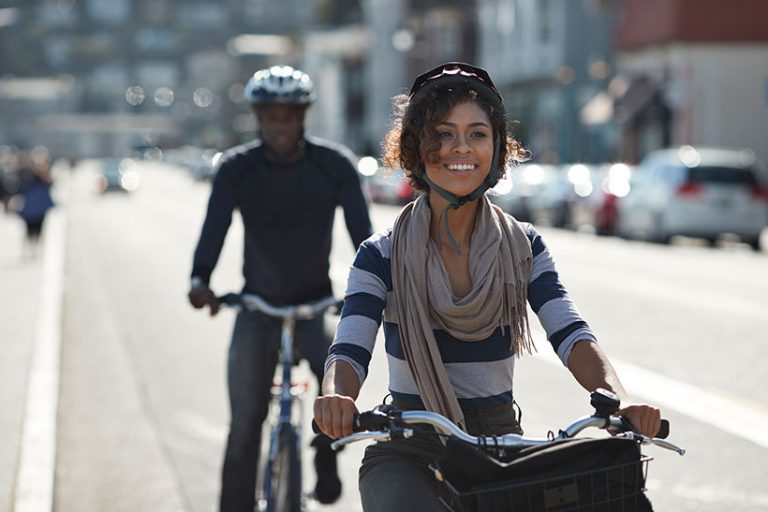 3. Make your home more energy-efficient – and switch to a green energy supplier if possible

This is different for everyone but it can include small things, such as switching off lights and appliances when you don’t need them, installing energy-efficient lightbulbs, fixing drafty windows, hanging your clothes to dry instead of tumble-drying them or setting your thermostat to lower temperature and wearing more layers.

If your circumstances allow, go for the bigger things, such as improving your house insulation, getting energy-efficient appliances or installing solar panels.

4. Reduce your water use

This goes with the above because taking long showers or baths uses a lot of energy as well as water!

Be prepared when you go shopping and bring your own bags, buy unpackaged foods, find a zero-waste shop near you where you can fill your own containers, buy products in compostable, glass or paper packaging, buy in bulk to avoid small packs and pack your own lunches and snacks in reusable containers.

What cannot be reused, always recycle! 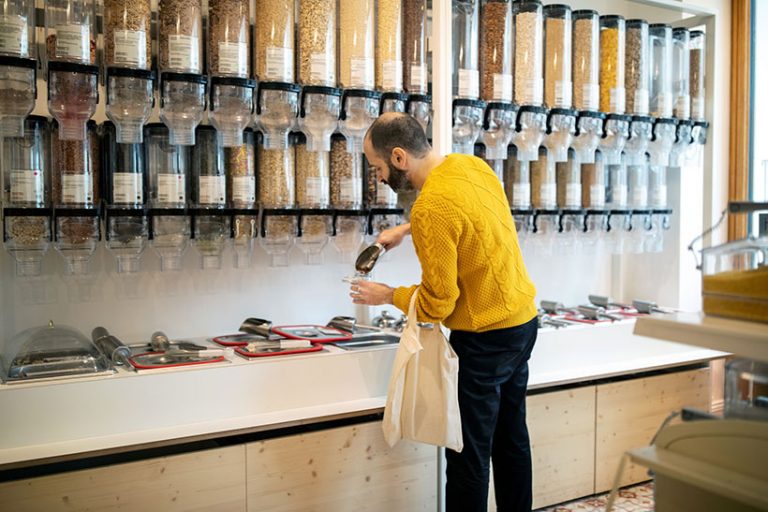 This is a no-brainer! Also buy recycled paper products whenever possible – notebooks, office paper, greeting cards, etc. And when it comes to personal hygiene, single-use sanitary products are big polluters too, so try a menstrual cup or period underwear instead.

7. Buy organic and local produce as much as you can

If you can grow your own, go for it – even if it’s just a couple of planters on the windowsill. 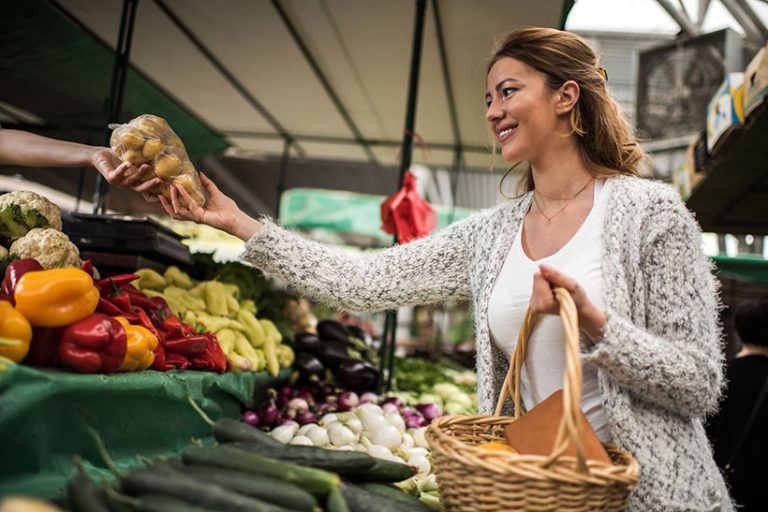 8. If you have to drive to do your shopping, do it only once a week

Doing one shop instead of two or three trips weekly saves more emissions than you may think!

The fashion industry produces 8-10% of global carbon emissions, so it’s worth taking a look at how many items we buy and how often.

Can you mend your clothes instead of getting new ones? Swapping or buying second-hand clothes are also great options.

A great deal of energy and emissions is wasted when we buy too much food and waste it, presents that nobody asked for, plastic children toys or shoes we only wear once in five years.

Before you make a purchase, pause and reconsider your motives.

If you don’t need something anymore, offer it to neighbours, friends, give it to a charity shop or sell it online. 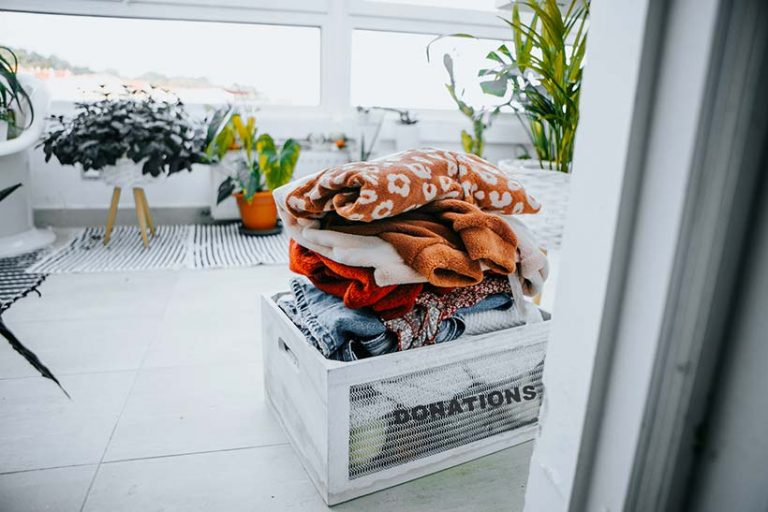 How will reducing my carbon footprint help to slow down climate change?

The fewer emissions each of us produces, the closer we get to halting climate change.

It may seem futile to bring your own fabric bags when you do your shopping while you see the sea of plastic around but every step in the right direction matters.

It’s not just about what you do but you’re also making a difference by inspiring people – others will notice and it sows a seed in their minds.

Being vegan is one of the greatest steps you can take to reduce your carbon footprint.

While once people saw veganism as a weird hippie thing, in 2021 there are hundreds of scientists advocating for it, plant-based food sales are skyrocketing and every major chain has vegan options.

That’s what it looks like when enough individuals take steps towards positive change.

We can’t always be perfect but can always do better. If you end up having to use single-use packaging or can’t find recycled toilet rolls in the shop, don’t beat yourself up but promise yourself to be better prepared next time.

Just never give up – every day you make choices that can help stop climate change, make them count!

Have you ever wondered how net zero carbon differs from carbon neutral?