We look back over the past few years at the top 6 funny vegan news stories that made headlines and had us crying with laughter.

Over the past few years, there have been some great vegan stories that genuinely made us cry with laughter.

These funny vegan news stories that broke the internet are the crème de la crème of plant-based drama and we hope you love them as much as we do.

So buckle in for a vegan history lesson and try not to laugh – we dare you!

Back in 2016, Sainsbury’s was the first supermarket to launch an own-brand vegan cheese range. But it was met with a wave of backlash. One angry keyboard warrior started what is now known as Gary-gate.

One woman was furious that Sainsbury’s was calling a non-dairy product ‘cheese’ and commented on Facebook: “Call it Gary or something just don’t call it cheese because it’s not cheese!”

And that’s exactly what the vegan community did. We called it Gary. Facebook was flooded with memes and jokes about Gary and a new group was created entitled; ‘It’s not Vegan Cheese, it’s Gary’.

Even Sainsbury’s got in on the joke, creating a rebranded packaging shot simply naming the product ‘Gary by Sainsbury’s’. 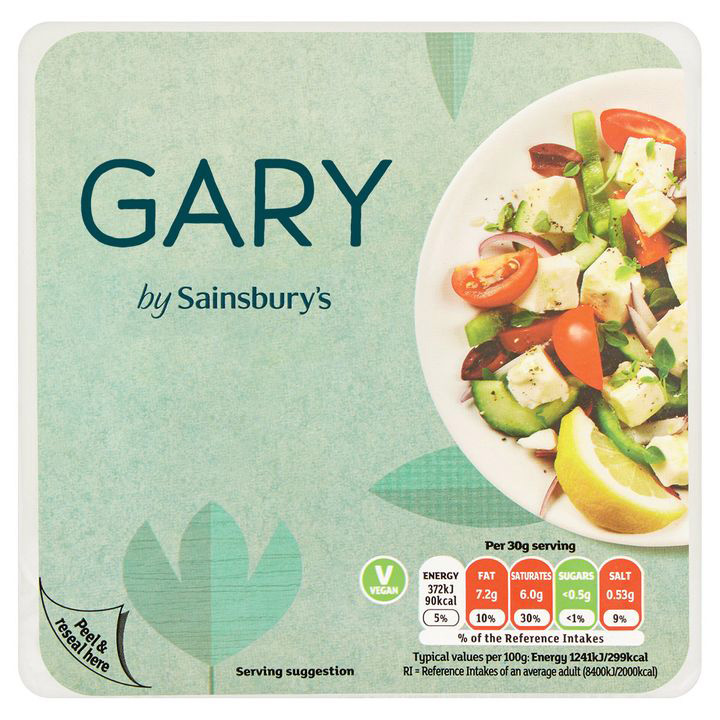 The caption read: “Thanks to customer feedback, we’re excited to introduce our new range of #Gary”.

The company behind the range, Bute Island Foods, also wanted to get involved and hilariously posted a photo of one of their staff members called Gary holding up a rebranded ‘Gary’ vegan cheese. We had such fun back in those days!

2. Piers Morgan and the saga of the Greggs sausage roll

Notorious anti-vegan journalist and broadcaster Piers Morgan seems to hate everything that vegans do.

But one thing, in particular, got him extremely riled up – the launch of the Greggs Vegan Sausage Roll in 2019.

He tweeted to his millions of followers: “Nobody was waiting for a vegan bloody sausage, you PC-ravaged clowns”.

The launch was then discussed on Good Morning Britain (the ITV morning show he was previously the co-host of) and Piers became a meme as he ‘tasted’ the new product before pretending to throw it up into a bin. A bit extreme don’t you think, Piers? 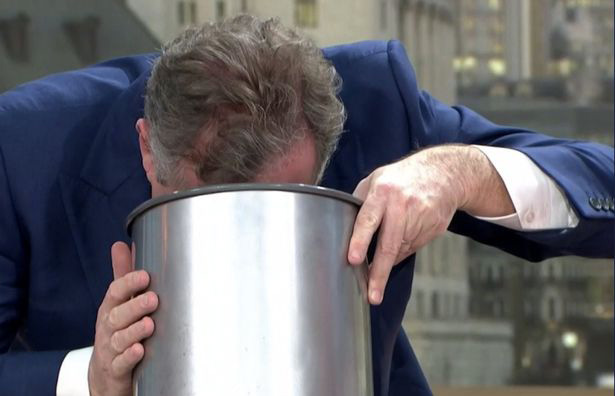 His co-host Susanna Reid ignored his embarrassing behaviour and told the audience that the vegan sausage roll was “delicious”.

The whole fiasco made headlines both within the vegan community and across major news outlets with a mixed bag of responses.

It was entirely ridiculous for a grown man to be so disgusted by the idea of a vegan sausage that he pretended it made him sick, and frankly, we found it hilarious!

Greggs vegan sausage rolls are objectively amazing, so there is no way he could have found it so inedible. The phrase ‘fragile masculinity’ comes to mind!

2019 also brought us the launch of vagina-shaped vegan fudge. Well, you know what they say – eat pussy, not animals!

Vegan fudge brand Fudgeina made headlines when it created anatomically correct fudge vulvas in a variety of colours and flavours.

Let’s be real, everyone is tired of everything being phallic-shaped, bring on the vaginas! 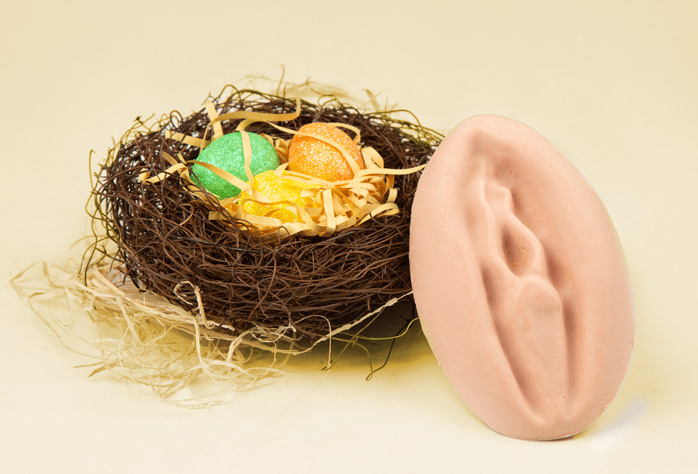 Speaking to the Metro about what influenced him to create the range of racy sweet treats, master fudge creator Matt Garbutt said: “The internet is full of services to send your friends (or enemies) dicks, poop or potatoes; but I couldn’t find a way to send a vagina, so I thought why not start it myself.

“While searching for what I could make the vaginas out of I stumbled upon fudge, and then the name really made itself. ‘The fudge is made by our artisan fudge maker, and then hand poured into our one of a kind mould.”

PETA (People for the Ethical Treatment of Animals) also jumped on the ‘sex sells’ bandwagon with one of their campaigns during Veganuary 2019.

The campaign created a cheeky advert that encouraged men to go vegan because it will help improve their performance in the bedroom.

In the video, a variety of men of differing ages and backgrounds are proudly flaunting their ‘genitalia’, which is made up of phallic-shaped fresh produce.

Sharing the video with their 1.6million followers on Twitter, PETA captioned the video: “’Traditional’ masculinity is DEAD. The secret to male sexual stamina is veggies. Increase your sexual stamina. Go vegan.”

While some viewers criticised the video, there is actually some truth to the campaign.

If you thought vagina fudge and men thrusting vegetables hanging from their trousers was fun, you’ll love our next story.

In late 2021, Holland & Barrett revealed it was entering the vegan sex toy market… with vegetable-shaped vibrators.

Customers can choose from a silicone carrot, chilli pepper, banana, corn on the cob, and aubergine to improve their lonely weekday evenings.

The toys have garnered thousands and comments and reviews, but one, in particular, has left the internet in hysterics.

The online review from ‘Karen’ reads: “Not your average corn on the cob. At first, I was a bit surprised at what I got as I was expecting a nice cob for dinner, I soon realised this was a whole other ball game.

“But being intuitive as I am I decided to make the most of this monster and I can honestly say best experience of my life, well done vegetable, definitely not suitable for vegans if you know what I mean.”

The saucy news story got many of us feeling hot under the collar, including Piers Morgan who couldn’t help but give his two cents! 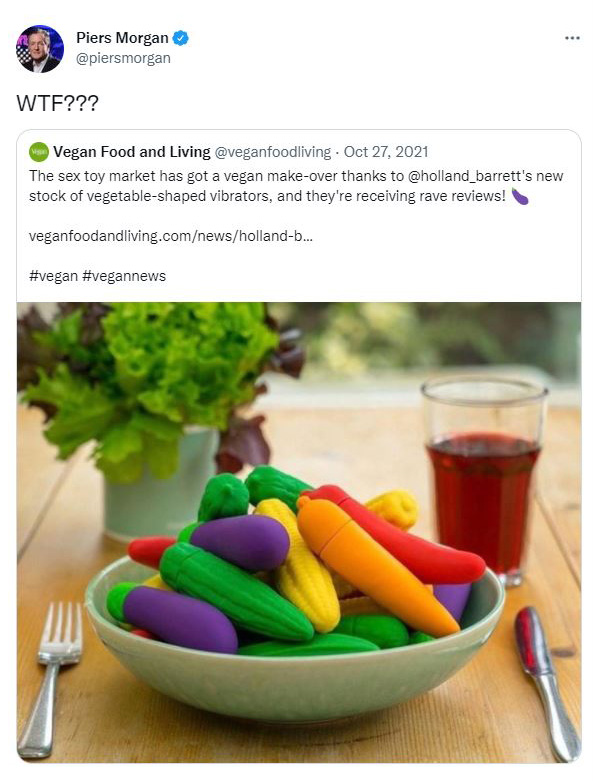 Formerly a plant-based athlete, Tim Shieff had been a passionate advocate for eating a plant-based diet to improve health and fitness performance, until in 2019 he started what we refer to as ‘salmon-gate’ and was dropped from his own vegan clothing company, ETHCS.

Having appeared on numerous TV breakfast shows and radio interviews, Shieff was well known in the vegan community as a champion of the plant-based diet, showing that you could be a strong, fast and successful athlete without consuming animal products.

But he shocked the internet when he released a YouTube video saying he had started eating salmon and raw eggs. He revealed: “The first night after I had that salmon I had a wet dream.

“I hadn’t ejaculated in months. You know, just to be honest with everyone. That turned something on within my body.” 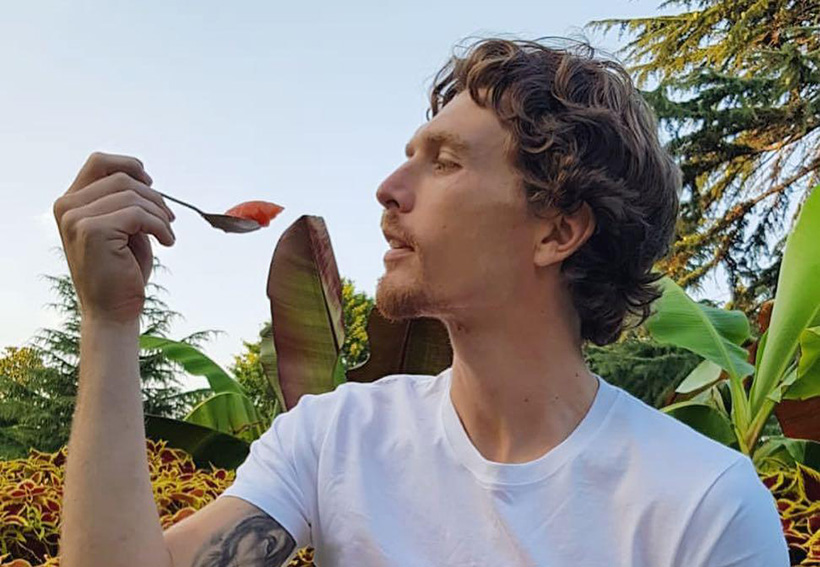 This bizarre confession was hilarious, and honestly, didn’t surprise us as Shieff had also engaged in controversial diet behaviours such as drinking his urine and going on an unsupervised 35-day water fast.

What angered vegans about this story the most was that the way Shieff portrayed it was that a plant-based diet had caused his health issues including fatigue, brain fog, and depression.

In reality, it is more likely these were a result of a poor diet and bouts of fasting. Consuming nothing but water and urine for 35 days would make anyone feel depressed and exhausted!

Did you enjoy these 7 hilarious vegan stories that broke the internet?

Have a read of our 17 vegan jokes and comedy sets that will make you laugh and cringe!