Factory farming fish: ‘People would be staggered by the size of Europe’s aquaculture industry’

Factory farming fish is responsible for nearly half of all fish consumed worldwide each year, and yet their suffering remains unseen.

Factory farming fish is responsible for nearly half of all fish consumed worldwide each year, and yet their suffering remains unseen.

While most people understand the filthy and depressing conditions endured by factory farmed chickens and pigs throughout their factory-farmed lives, they may be surprised to learn how factory farming fish means they suffer the same miserable fate.

Billions of land animals are factory-farmed every year for food. This is a fact that many people overlook – but are, in fact, ultimately aware of.

But what about those animals who live in water? Do they fare any better than land mammals?

Earthling Ed – the co-founder of campaign group Surge and author of the forthcoming book This is Vegan Propaganda – says in numerous cases, they do not.

He told Vegan Food & Living that aquafarming – the equivalent of factory farming for fish – is responsible for ‘nearly half of all fish consumed worldwide each year’.

“People would be staggered by the sheer size of Europe’s aquaculture industry,” he added.

“The numbers of marine animals that we farm are so great that we don’t even count them individually but by the ton, and we pull more than a million tonnes of fish and molluscs out of the water every year generating €4 billion.”

Add this problem is closer to home than many in the UK may think. 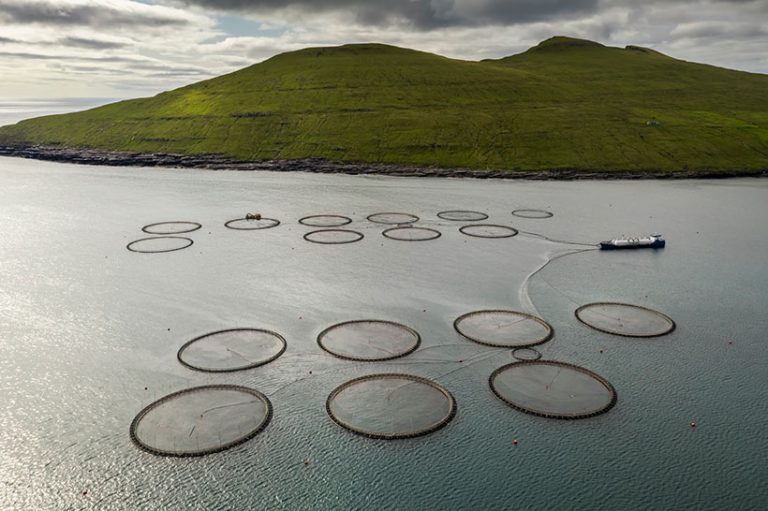 A salmon fish farm near the Faroe Islands

What species of fish are farmed in the UK?

She told VF&L that Atlantic salmon and rainbow trout are the main fish species factory farmed in the UK.

“Atlantic salmon, farmed in Scotland, are the second-highest species factory farmed in the UK (behind broiler chickens),” she said.

“The Scottish salmon industry reports that 52.9 million smolts (young salmon) were produced in 2019, the highest number so far.

“However, a huge number of these young salmon will not even make it to the full market weight. The mortality rate – from when smolts were put into seawater cages to the point at which they were slaughtered – was 26.2% in 2017.

“Rainbow trout are the third most factory-farmed species in the UK. In 2019, over 13 thousand tonnes of trout were produced, which means that up to 25 million fish were farmed (the exact number depends on size at slaughter).” 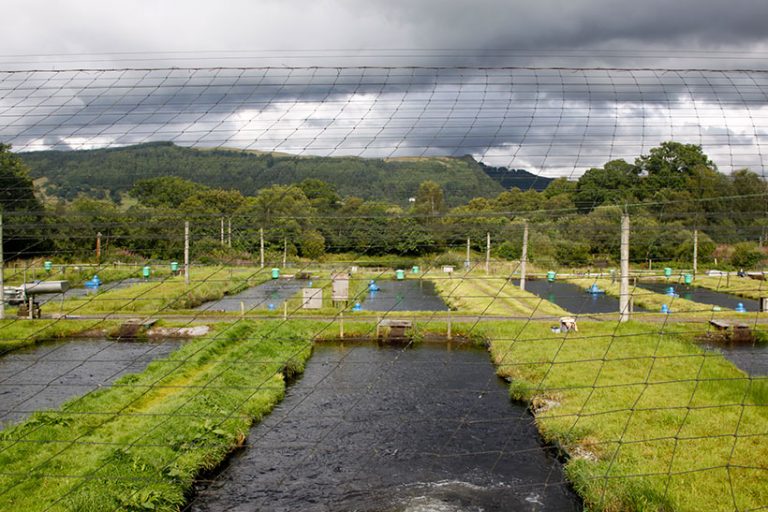 Trout farm in the Trossachs, Scotland

Enjoying this article? Read these next:

How are fish farmed on aquafarms?

Both CIWF and Earthling Ed have major welfare concerns when it comes to aquaculture. Both parties cite the grim conditions the animals endure during their lives, as well as their often brutal deaths.

Earthling Ed said: “Fish spend their entire lives in underwater enclosures, either in sea cages or concrete tanks, and the overcrowding makes them susceptible to disease, stress and physical injuries such as fin damage, or spinal deformity, as well as parasitic infections.

“Fish are also handled roughly on aquafarms and those who are deemed too sick are taken out of the tanks and often beaten to death.”

Dr Lara added: “Most of the 51-167 billion fish produced in farms worldwide are reared in intensive systems, where fish are kept at high stocking densities in barren environments – a set up tailored to maximise production rather than fish welfare.”

According to Dr Lara, fish are ‘intelligent with impressive behaviours and problem-solving abilities helping them find food, mates and avoid predators’.

She added: “An intensive farm is, by contrast, a boring and unstimulating environment that restricts the fishes’ behaviours”.

She said: “In intensive aquaculture fish can suffer from higher rates of acute and chronic stress, aggression and injuries, and with this the risk of disease transmission increases.

“Fish are often exposed to extremely stressful handling procedures, involving being taken out of the water where they experience asphyxia (suffocation), and the vast majority of fish farmed around the globe are killed using inhumane slaughter practices.”

These practices include asphyxiation in air or ice slurry. Loss of consciousness and death by these methods is not quick, and suffering is unacceptably prolonged.

Advocates believe fish should be stunned before being killed to avoid pain and suffering.

Dr Lara continues: “Stunning methods (such as electrical or percussive stunning) are available and can allow for a more humane death for some species, but there is a significant amount of work required to achieve widespread industry adoption.

“Many of the most popular fish to eat are carnivorous, meaning they eat other fish in the wild.

“When carnivorous species are farmed, we also need to consider the welfare of the huge numbers of fish that are caught from the wild to be made into feed for farmed fish.

“Every year 0.5 – 1 trillion fish are caught from the wild, destined to be reduced down to fishmeal and oil – around 70% of which is used by the aquaculture industry as feed. These fish will suffer during capture and are left to suffocate on board the vessel.

“The factory farming of fish also comes with environmental issues such as greenhouse gas emissions, deleterious impacts on wild fish populations from farmed fish escapes, antibiotic and chemical use or abuse and nutrient release from waste feed and faeces that impact the marine environment.” 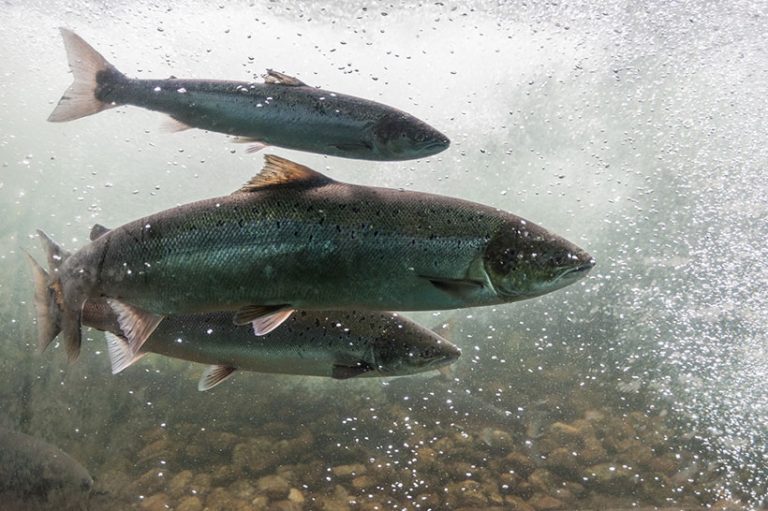 According to Dr Lara, fish are 'sentient animals' who 'have evolved to live in a huge variety of complex habitats'.

How can you help factory-farmed fish?

However, there are things consumers can do to help factory-farmed fish.

CIWF encourages people to eat less animal products, including fish. According to the CIWF, ‘switching to a more plant-rich diet…is better for animals, human health, and the planet’.

Dr Lara concluded: “Consumers can also help by getting involved in public campaigns working to improve fish welfare such as our Rethink Fish campaign.”

She added that people who do choose to eat fish ‘may want to look at both sustainability issues and animal welfare’.

When it comes to advocacy beyond diet, she also had a helpful list of actions concerned people can take.

“These actions all help to add campaign and lobbying power to drive forward positive changes for fish,” she said.

He added: “The Aquaculture Stewardship Council (ASC) grants certification to aquafarms without looking at how much space the fish have to swim, whether starvation is kept to a minimum, if enrichment is provided or how fast and painless their slaughter is.”

Indeed, Ed recently opened his own vegan fish as chip shop in Brighton. It proved so popular in fact that people were queuing down the street interested in trying the cruelty-free alternative.

As Ed himself says: “Eating fish is also fundamentally unethical when one considers that most of us can not only survive but thrive without marine animals in our diets.

“So the best thing we can do to help factory-farmed fish is firstly to stop eating all fish altogether, and secondly to support organisations that campaign against fishing and aquaculture by lobbying policymakers and informing the public.”

Now you know the truth about fish farming, are you ready to stop eating fish?

Try these vegan fish recipes to make at home.