Following the launch of its first vegan burger in 2020, Burger King has now expanded its vegan menu and opened its first vegan restaurant in London. If you're wondering what vegans can eat, here are all the vegan options on Burger King's UK menu.

Wondering what vegan options at chain restaurants are available? Well, Burger King’s had something of a vegan glow-up this year, and we’re here for it. But back in 2020, things weren’t quite so cosy between Team BK and Team Vegan …

In January 2020, Burger King launched its first-ever plant-based burger, the Rebel Whopper, to much fanfare. But elation quickly turned to disappointment for many vegans and vegetarians when it was revealed that the burgers were cooked on the same grill as the meat-based Whoppers.

“But it’s Veganuary!”, we said. “Why didn’t Burger King make them vegan?” After the triumph of the Greggs vegan sausage roll back in 2019, Burger King’s offering felt like a damp squib and, after some social media ranting, vegans took their custom elsewhere.

But all the chatter must have got the fast-food giant thinking, and we witnessed Burger King releasing a string of new vegan options in 2022.

Collaborating on their new menu items with The Vegetarian Butcher and The Vegan Society, the fast-food king has even gone so far as to get several of its plant-based products certified vegan.

The potential customers who were so disappointed two years ago can now feel much more assured walking through the door.

Burger King really has ramped up its vegan menu for 2022, making up for past mistakes and wooing herbivores and soon-to-be herbivores across the country.

Now you can walk into a Burger King anywhere in the UK and find three plant-based menu options as standard. So what are they?

Burger King’s Vegan Royale is the new, plant-based variation of its iconic chicken burger, which the fast-food giant describes as the “crowning glory” of its plant-based menu.

The Vegan Royale is available as a meal and comes with fries and a choice of drinks. 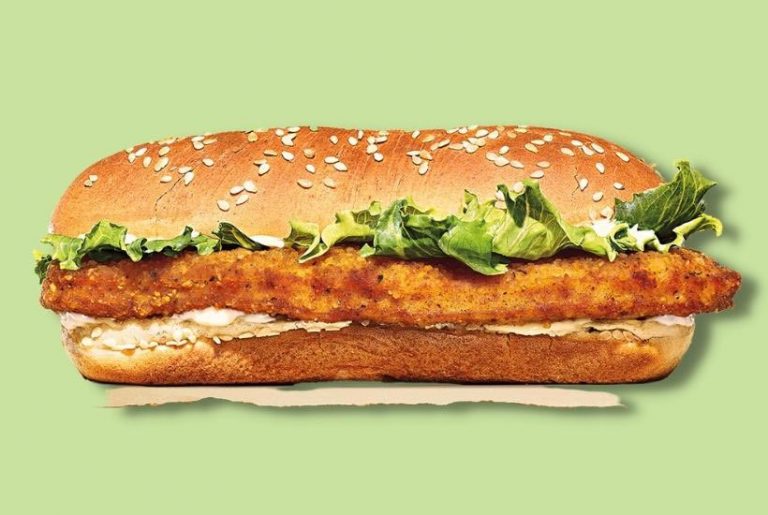 Available in six-piece, nine piece and twenty-piece sharing packs, Burger King’s vegan nuggets are certified by The Vegan Society and are served with a sweet chilli sauce.

Burger King’s BBQ sauce is also vegan, so if you prefer you can swap out sweet chilli for that. The Vegan Nuggets at Burger King contain soy, wheat, celery, and gluten.

Vegan Nuggets are also available as a main meal deal and are served with fries and a choice of drink.

The Plant-Based Whopper is a flame-grilled soy-based patty with tomatoes, lettuce, vegan mayonnaise, pickles, ketchup and onions stacked between a sesame seed bun.

Burger King’s Plant-Based Whopper is not certified vegan by The Vegan Society as it is cooked on the same broiler as the meat-based Whopper to guarantee the flame-grilled taste.

The Plant-Based Whopper contains no animal ingredients, but there is a risk of cross-contamination because of how it is cooked, which is why The Vegan Society cannot certify it.

For vegans and vegetarians, consuming a Plant-Based Whopper is a personal choice. The risk of contamination is likely similar to sharing a BBQ with friends, where you separate vegan and non-vegan foods but cook on the same grill.

Equally, if you’re happy to order food from restaurants where they prepare non-vegan and vegan dishes in the same kitchen, using the same ovens and grills, then the risk of cross-contamination is probably similar again. 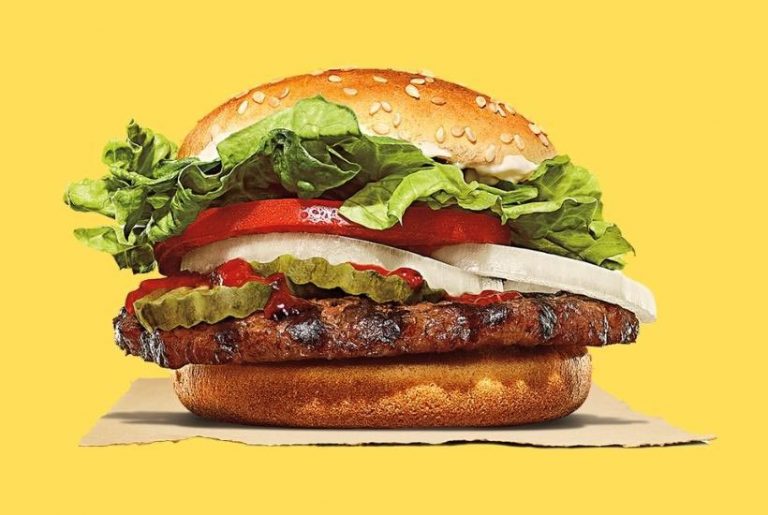 Burger King’s Plant-Based Whopper is not certified vegan by The Vegan Society as it is cooked on the same broiler as the meat-based Whopper to guarantee the flame-grilled taste. Image: Burger King

I do both of these things, so I would order a Plant-Based Whooper and feel confident that no animals were harmed in the making of them. .

But it’s great to have other vegan options available at Burger King, because now I can choose what feels right for me.

For flexitarians and those wanting to cut down on meat, the Plant-Based Whopper is a great option as it mimics the exact taste and flavour you’re used to.

The Plant-Based Whopper is available as a meal, and comes with fries and a choice of drink.

Burger King fries are vegan as they contain no animal products and are fried in a dedicated fryer.

However, there is a statement on the Burger King website to say that cross-contamination is still possible as the different fryer vats share an oil filtration system. 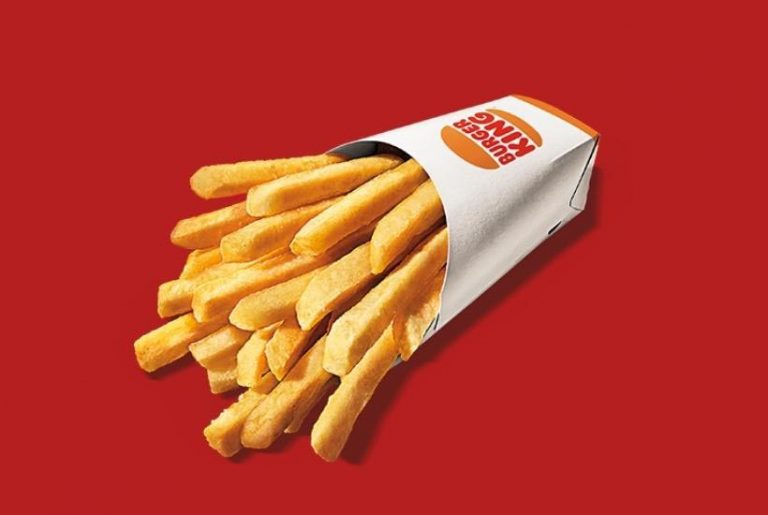 Burger King's fries are fried in a dedicated fryer and contain no animal products so are suitable for vegans. Image: Burger King

Similar to the fries, Burger King’s onion rings are vegan as they contain no animal products and are fried in their own separate vat. The same disclaimer about cross contamination due to the shared filtration system is also on the onion ring ingredients web page.

On both the fries and onion rings ingredients information there is the standard ‘may contain’ disclaimer. This is because it is a legal requirement to declare if something is produced in a space where non-vegan items are prepared. You’ll see a similar disclaimer on, for example, bags of crisps and other products at the supermarket.

It doesn’t mean that your crisps are not vegan. If there are no animal products or by-products on the ingredients list then it’s vegan. The disclaimer exists to let the consumer know how the product was prepared.

If you have an allergy to dairy or another allergen on the ‘may contain’ statement, then it’s probably wise to consult a professional before purchasing, or avoid altogether. 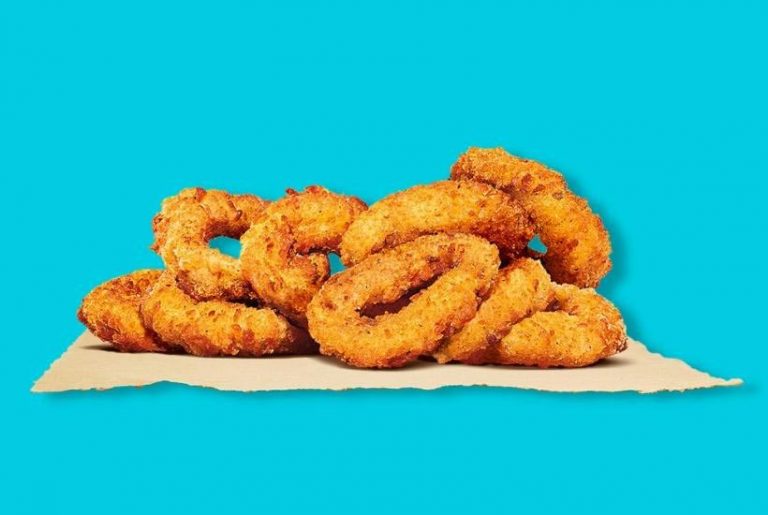 Burger King’s onion rings are vegan as they contain no animal products and are fried in their own separate vat. Image: Burger King

Do all Burger Kings have vegan options?

After the success of Vegan Burger King London (more on this below), the Vegan Royale, Vegan Nuggets, Plant-Based Whopper, fries and onion rings are now available as standard at all Burger King restaurants nationwide.

Demand will vary from location to location of course, so if you’re planning a special trip then it’s probably a good idea to call ahead to check. You can also order the vegan and plant-based options from Burger King for delivery via Deliveroo (if the service is available in your area).

Earlier this year, Burger King transformed its flagship London restaurant into a fully plant-based destination for an entire month.

From overhauling the decor and signage inside and out, to a menu of 25 plant-based options, Burger King’s Leicester Square branch was completely transformed. And it was the talk of the town all over social and mainstream media.

Open as a fully vegan restaurant from 14 March – 10 April 2022, the fast food giant launched its Vegan Royale, Vegan Nuggets and re-launched its Plant-Based Whopper, alongside a host of other plant-based options.

The trial proved so popular and attracted so much attention that, at the end of the month, Burger King declared that three of the new, plant-based items were here to stay. And that’s how the Nuggets, the Plant-Based Whopper, and the Vegan Royale became standard at all locations right across the country.

And to top it off, they also announced a target for 50% of their menu to be meat-free by 2030. Which means that UK herbivores can look forward to the release of more, tasty plant-based options every year.

We wanted to try the vegan venue for ourselves and you can read all about our experience at the vegan Burger King restaurant in our review.

Have there been any other vegan or plant-based options at Burger King?

To coincide with the launch of Vegan Burger King London, the restaurant chain launched two limited edition plant-based burgers for a week in March.

From 4 – 8 March 2022, veggie-curious customers could enjoy a Vegan Katsu Royale or a Plant-Based Katsu Chilli Whopper at all UK locations. 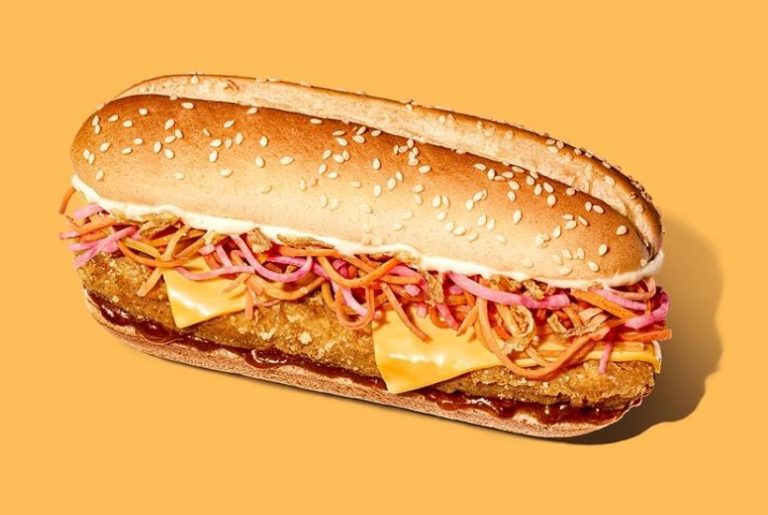 This Bean Burger made an appearance back in January and February 2021 to coincide with Veganuary.

Bean Burgers had featured on Burger King’s menu before but were served with dairy cheese. The limited edition Vegan Bean Burger came with vegan mayonnaise instead, was certified by The Vegan Society, and was welcomed by Veganuary participants and vegans alike.

Was it popular enough to warrant a comeback? Only time will tell!

Following the success of its vegan burger launches, Burger King UK has pledged make its menu 50% meat-free by 2030 to lower emissions.

The news was announced alongside the launch of its vegan nuggets, which Burger King UK chief executive Alasdair Murdoch described as a “significant milestone.”

“We’re pleased to announce the launch of BKUK’s new vegan nuggets across our menus nationwide – a significant milestone for the company and an important next step in achieving our target of a 50 percent meat-free menu by 2030,” Murdoch said in a statement.

Furthermore, the fast-food chain says it’s already on track to meet its goal of serving a 50% plant-based menu by 2031.

If you love eating out, you must take a trip to London.

But before you do, check out our guide to the best vegan restaurants in London.