With so many brilliant meat-free bangers to choose from, let us help you to find the perfect vegan sausage for your summer BBQ.

A few years ago veganism was on the fringe and it was a lot more difficult to find vegan products, menus and information.

These days, veganism is firmly embedded in the mainstream and we’re almost spoilt for choice with the options available to us now.

Barely a day goes by without a new vegan product being released to market which can make it hard to keep up with all the goings-on in the vegan community.

That’s why we’ve decided to launch our new ‘Top 10’ feature where each week we will bring you our pick of the best vegan products, books, podcasts, people to follow and more so you can discover new and exciting brands, tasty things to eat and people to inspire you.

To kick things off with a bang(er), we’re going to take a look at the most succulent and delicious vegan sausages on offer in UK supermarkets.

With so many brilliant meat-free bangers to choose from, let us help you to find the perfect plant-based sausage for your summer BBQ. 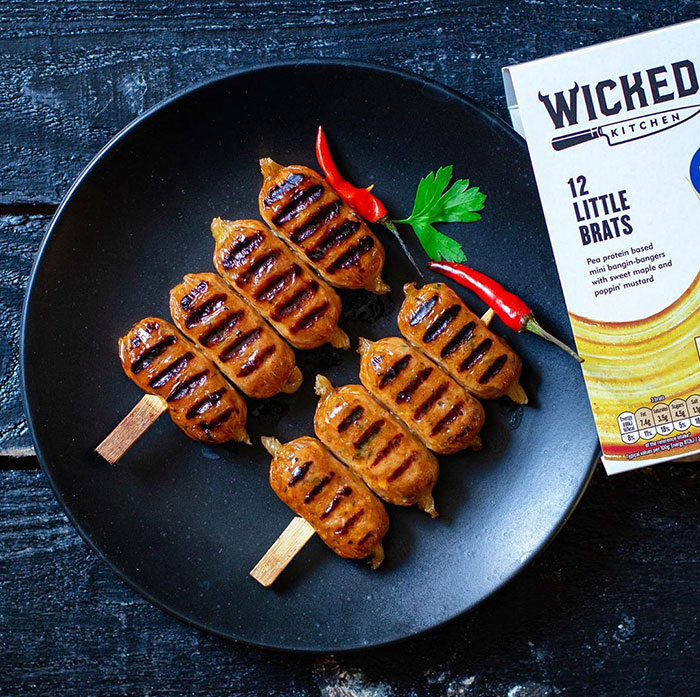 The team behind Tesco’s Wicked Kitchen range are huge BBQ fans and experts at creating innovative plant-based dishes that aim to tempt even the most ardent of meat-eaters. As well as offering Chorizo-style sausages in their Tesco range, Wicked Kitchen have recently released Little Brats, mini bangin’ bangers that are perfect to barbecue over the summer!

By Little Brats online and in Tesco stores. 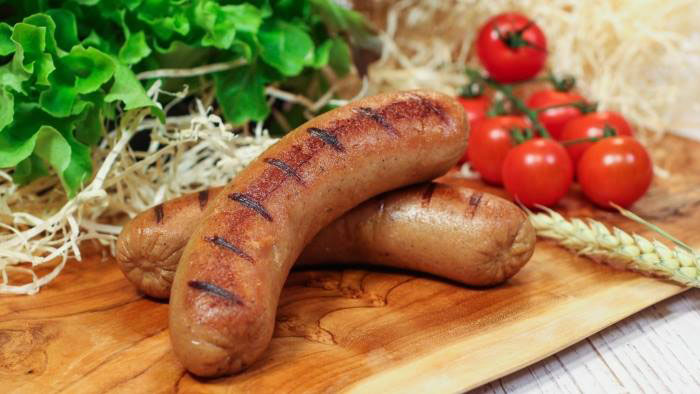 This Farmhouse Sausage is a delicious meat-free alternative to the classic banger, but with a tasty smoked flavour. It’s great fried up as part of a vegetarian traditional breakfast or on a meaty bread roll sandwich or try it in a classic sausage recipe like vegan Toad in the Hole. 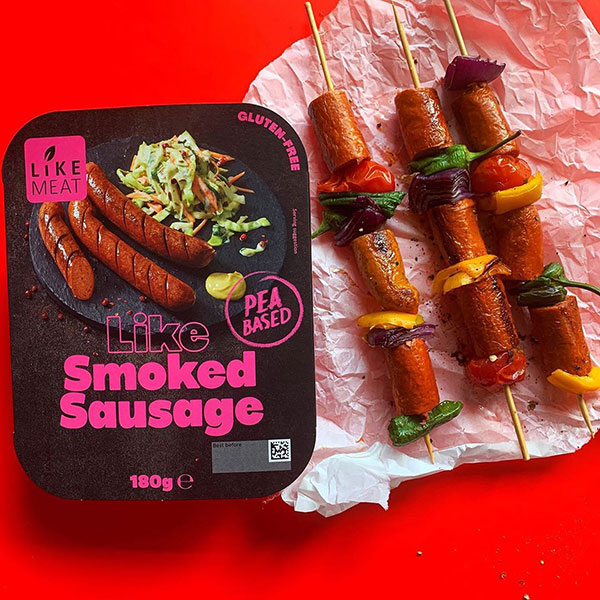 German’s are well-know for their sausages, so it’s no surprise that plant-based German brand LikeMeat ‘s Smoked Sausages taste so good! If you were once a fan of Frankfruther sausages then LikeMeat’s meat-free version is sure to hit the spot. The smokey-flavoured sausages combine the smoked taste of ham with the firm bite of a sausage and are a great source of protein and fibre.

Find them at Tesco 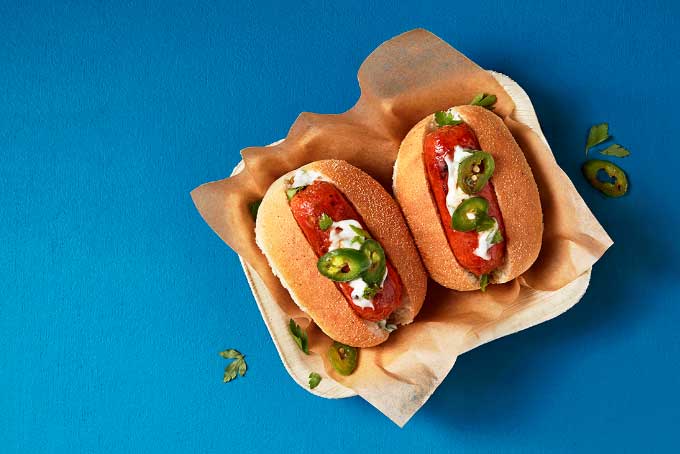 M&S’s Chorizo Puppies are a vegan take on the classic chorizo sausage made with mushroom, red pepper, soya, smoked paprika, roasted garlic, caramelised onion, roasted chilli. These flavoursome sausages can be grilled or cooked in the oven which is handy if the rain comes along to put out your BBQ! 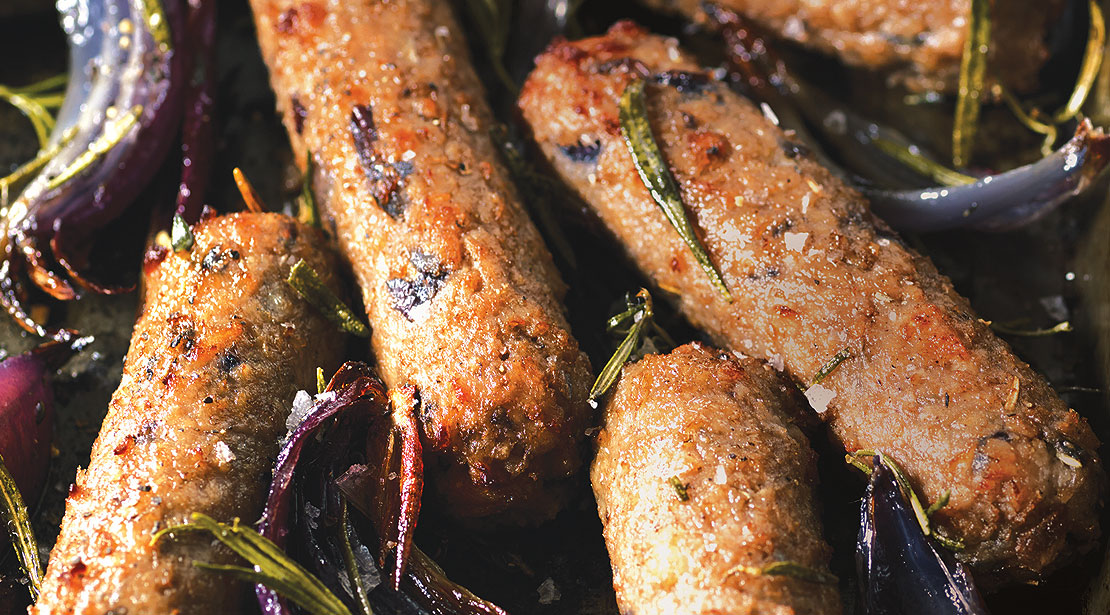 Linda McCartney’s sausages have been loved by vegans and vegetarians alike for many years thanks to their realistic taste and texture. The company’s popular plant-based sausages are available in four different varieties including Red Onion & Rosemary, Original Vegetarian, Chorizo & Red Pepper Sausages and Lincolnshire. Our personal favourites are the red onion and rosemary thanks to their punchy flavour which can be grilled or baked in the oven.

Linda McCartney’s vegan and vegetarian products are stocked at most major supermarkets as well as at Budgens, Co-op, Holland & Barrett and Lidl.

3. Beyond Meat Beyond Sausages 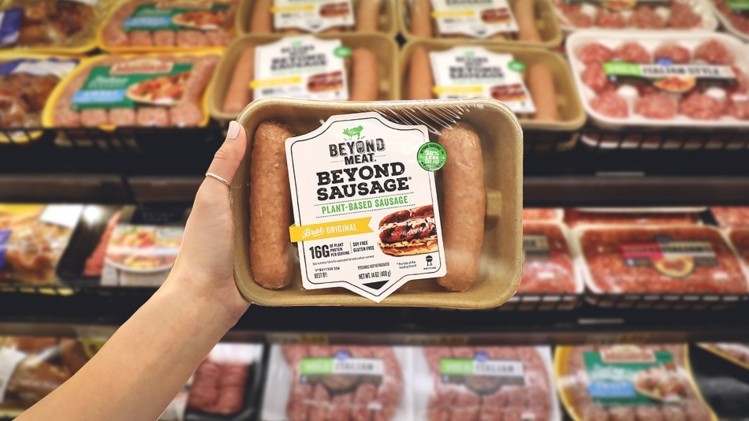 The brand behind the plant-based burger that’s converting meat-eaters across the globe, Beyond Meat, launched its highly-anticipated plant-based sausages in the UK last year. In order to achieve a meaty taste and texture that delivers the juicy, sizzling & delicious satisfaction of a pork sausage, the Beyond Meat has used a blend of pea protein, fava beans and rice to create the plant-based product.

Find them at Tesco 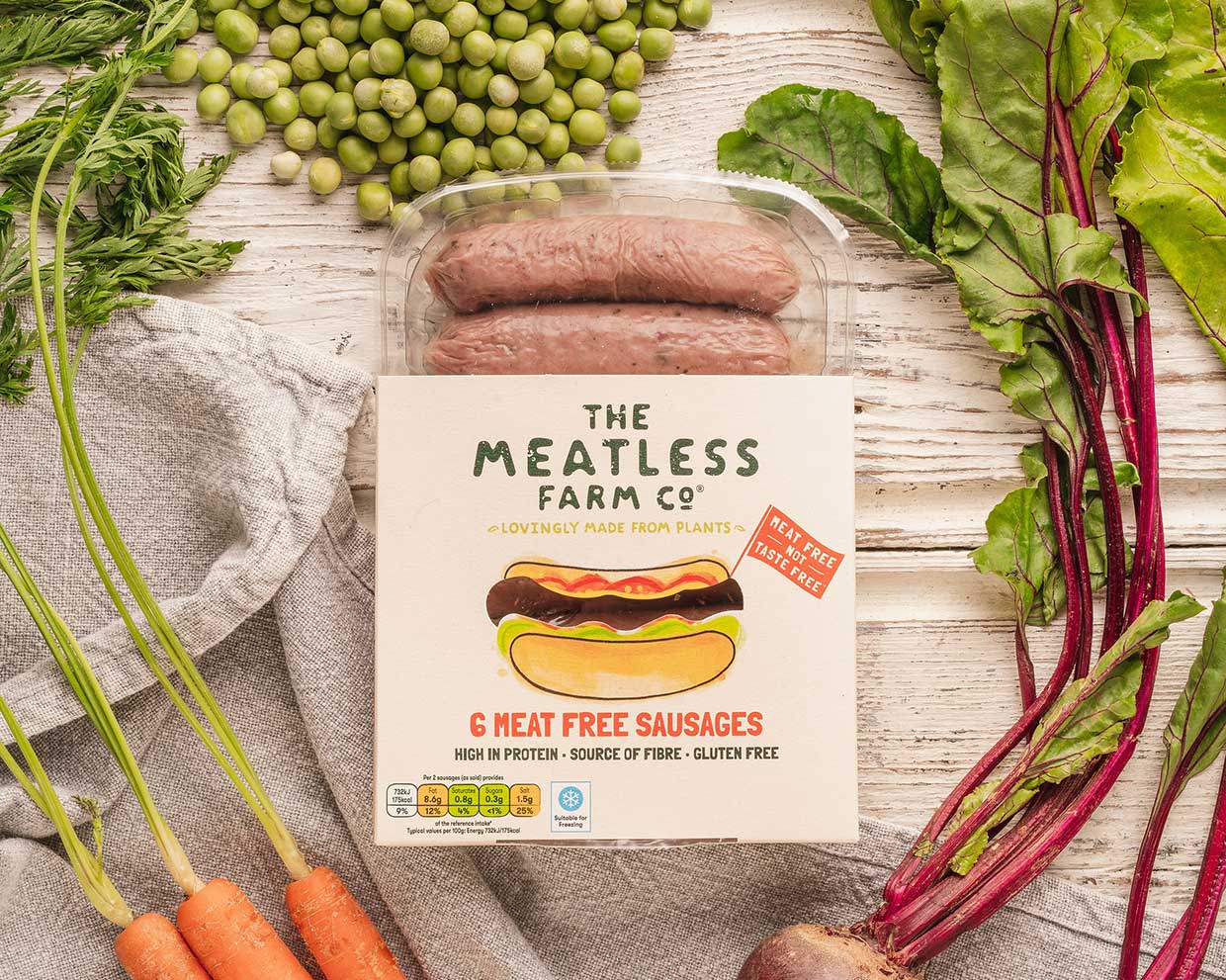 The Meatless Farm Co.’s plant-based sausages provide a satisfying bite without compromising on flavour and each fresh sausage is packed full of juicy flavour, herby aromas and a meaty texture that are perfect for throwing on the BBQ this summer.

A healthy alternative to meat, the sausages are made with plant-based ingredients and are a high source of protein as well as a good source of fibre. They’re also gluten-free!

Find them at Sainsbury’s and TheVeganKind Supermarket. 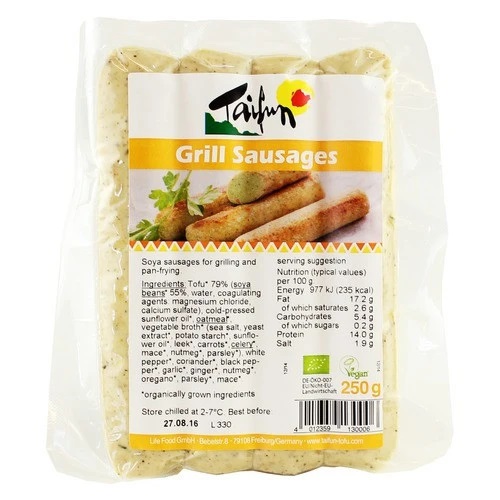 Perfect for grilling, Taifun’s Grilling Sausages are made with firm, flavoured and spiced tofu which offers something a little different to many other vegan sausages available on the market.

These legendary grill sausages have a delicate peppery note and can be fried in a pan or throw on the barbecue.

Find them at TheVeganKind Supermarket and Ocado 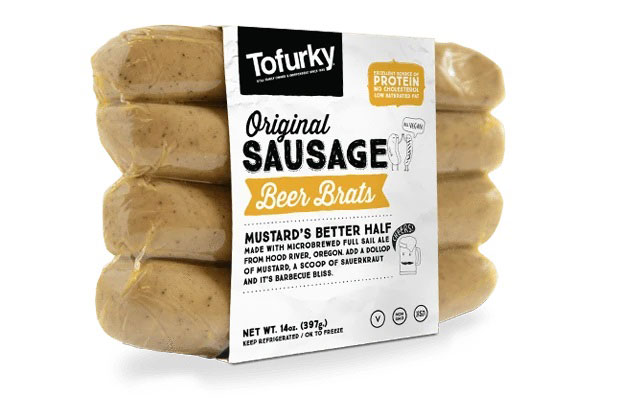 These meat-free sausages are convincingly meaty with all the tastes and textures you’d expect from a pork sausage minus the cruelty. Serve them in a fluffy hot dog bun with ketchup, mustard and fried onions for BBQ perfection.

Find them at TheVeganKind Supermarket and Sainsbury’s 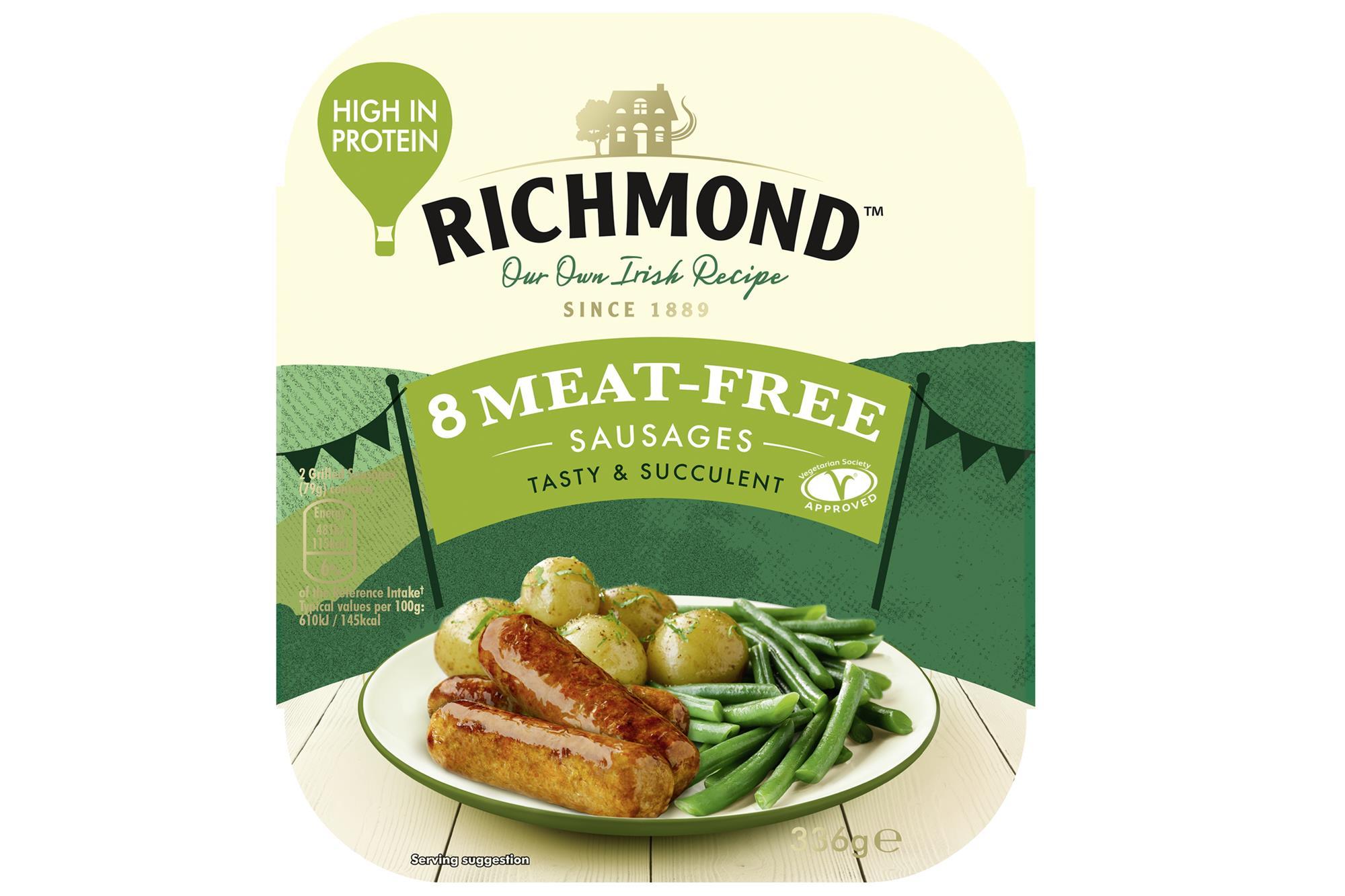 Famed for their meaty sausages, Richmond recently branched out into the world of meat alternatives with its meat-free sausages. They have been carefully designed to ensure they “look and taste just like a Richmond Pork Sausage, right down to the crispy skin fans love” and have won praise from fans online.

Find them at Tesco and Morrisons