Are zoos vegan? We explore both sides of the debate

Are zoos vegan? Should vegans support them for their animal conservation abilities, or are they just a form of animal exploitation? We explore both sides of the argument.

Should vegans visit zoos? For many vegans it goes without saying that zoos represent the use of animals for entertainment, and as such they’re not a place that vegans would visit or be in favour of.

For others, the rescue and conservation efforts of some zoos makes the issue a little less black and white.

The points presented here are purely so that both sides of the debate can be considered, and you can make up your own mind as to which side of the debate you support.

Yes, zoos are vegan-friendly – it’s a matter of conservation and education

Zoos nurture and promote an interest in animals; they can be places of education.

Learning about animals and seeing that they are intelligent creatures with the same basic needs as us might encourage people to alter the way they think, and ultimately change their diets and lifestyle to a cruelty-free one.

Not all zoos are the same, the levels of care given to the animals and the intentions of the zoo will vary wildly from place to place.

Yes, some zoos are appalling and only interested in using animals for profit. But other zoos re-home rescued animals or ones that could no longer survive in the wild.

Providing animals with a sanctuary

Animals rescued from circuses or previously owned as illegally purchased pets will find no better home than a good zoo. Without zoos like this, many of those animals might have to be euthanised, or never be presented with the opportunity of rescue and relocation in the first place.

There are also conservation zoos like Colchester Zoo, where there are projects and breeding programmes designed to help reintroduce threatened species back into the wild. To visit a zoo like this helps to fund positive action.

Zoos with conservation programmes aren’t just positive – they are crucial for the safeguarding of endangered species.

They can provide ‘back-up’ populations, which can then be used in reintroduction projects in the wild or even for the donation of sperm or eggs to wild populations.

People like to see and be with animals, and zoos can offer a much more educational and ethical alternative to circuses or places like Seaworld where animals are made to perform.

Many zoos try to recreate the natural habitats of animals, and the relationship between them and us is one of observation and learning, not entertainment and cruelty. 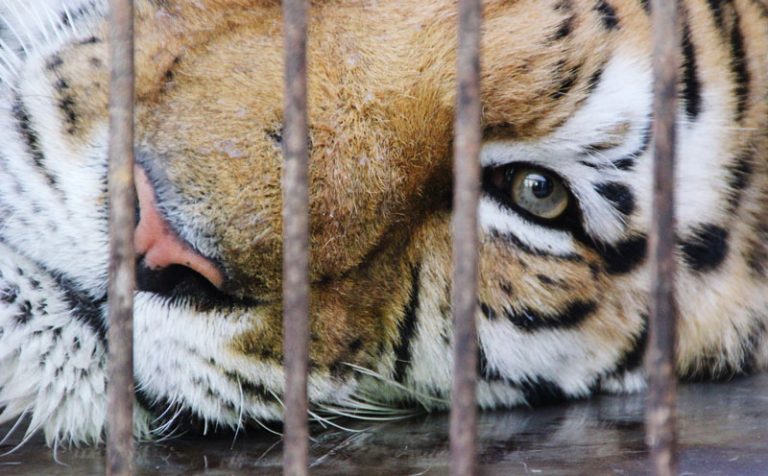 Even if they're well cared for, could a wild animal ever be happy with a life behind bars? Image © Alknany Bdallh / EyeEm via Getty Images

No, zoos aren’t vegan – we don’t have the right to keep animals captive

In zoos, animals are there for the entertainment of humans.

Even when that entertainment has a degree of education, animals are still captive for our benefit.

We can learn about animals and wildlife in many ways, we don’t have to keep them in zoos for the sake of our own education.

Even in zoos where conservation is a priority, there is still the issue that the freedoms and needs of individual animals are compromised in the name of ‘the greater good’.

It is still speciesist to assume that we have the right to keep animals captive, even if we believe the ultimate outcomes associated with preventing extinction are positive.

A life confined to a small enclosure

Animals are not able to thrive in such small places.

Even ‘good’ zoos simply can’t afford to provide spaces large enough to satisfy the normal roaming and exploring instincts of many animals.

And as for bad zoos, some of the conditions can be so cramped and awful that animals suffer from ‘zoochosis’. If you see an animal rocking back and forth, it’s likely that it’s suffering severe mental depression from being cooped up in such confined and inadequate conditions.

Even if enclosures are of an adequate size, most zoos provide a chance to see non-native animals from completely different parts of the world.

This can mean that animals are often kept in climates very different from the ones they should be living in. Even if the animals receive a good standard of care, it can’t be good to keep them in an alien environment.

If people want to see animals and fund something positive, there are plenty of amazing animal sanctuaries that desperately need money for upkeep, rescue operations, education programs, and investigations.

Most zoos are for-profit operations, whereas animal sanctuaries prioritise the safety, comfort, and well-being of the animals.

We have presented you with two sides of the argument, but what do you think? Are zoos vegan? It’s time to make up your mind for yourself.

Vegan debates are rarely clear cut. Here’s another question for you to explore – is horse riding vegan?