Are figs vegan? Why the answer perhaps isn’t as simple as you might think

It might not be something you've ever considered before, but do vegans eat figs? And if not, why are figs not vegan? We explore the debate from both sides

Figs are just an innocent fruit, that are equally delicious eaten raw or used in vegan recipes, right? Nothing controversial about that. Well, that’s not quite the case.

Just as some oranges and lemons have a question mark over them, the matter of whether or not figs are vegan isn’t an entirely straightforward one either.

The issue surrounds the fact that figs rely on wasps to pollinate them. Nothing unusual there.

But because figs start off as an inverted flower, the wasp must crawl inside in order to pollinate. The wasp then becomes trapped in the fig and dies, and enzymes within the fig digest the body of the wasp.

As a wasp has died in this process, some people argue that figs therefore are not vegan. Others counter that it is just a part of nature, and doesn’t really constitute exploitation of the wasp.

Here we explore both sides of the argument so that you can make up your own mind.

According to the Vegan Society: “Veganism is a way of living which seeks to exclude, as far as is possible and practicable, all forms of exploitation of, and cruelty to, animals for food, clothing or any other purpose.”

According to its literature: “One thing we all have in common is a plant-based diet avoiding all animal foods such as meat (including fish, shellfish and insects), dairy, eggs and honey – as well as products like leather and any tested on animals.”

For many vegans, the important part is ‘as far as practicable’. There is a world of difference between factory farming, the daily slaughter of animals, and the animal testing that goes on in labs on one side, and the incidental consumption of insects on the other.

The pollination of figs is an entirely natural – and mutually beneficial – process that takes place in some, but not all, varieties of figs. Plus in contrast to what some people think, the crunchy bits in figs are seeds, and not the remains of wasps.

Nutrition student Jamie Kennedy says: “Some commercial fig varieties are grown without wasp pollination – so first of all a blanket ban on all figs is completely unnecessary.

“I eat them because they are very healthy – figs are a good source of fibre and a number of minerals.

“I think some people should bear arable farming methods in mind – every time you eat bread, mice will have been accidentally harvested by the machines, for example. If you’re going to eliminate figs from your diet, you are going to have a hard time justifying eating wheat or other harvested crops where the collateral damage is equal or even worse.

“Because this is a natural process, I am satisfied I am not contributing to the exploitation or suffering of animals by eating this fruit.” 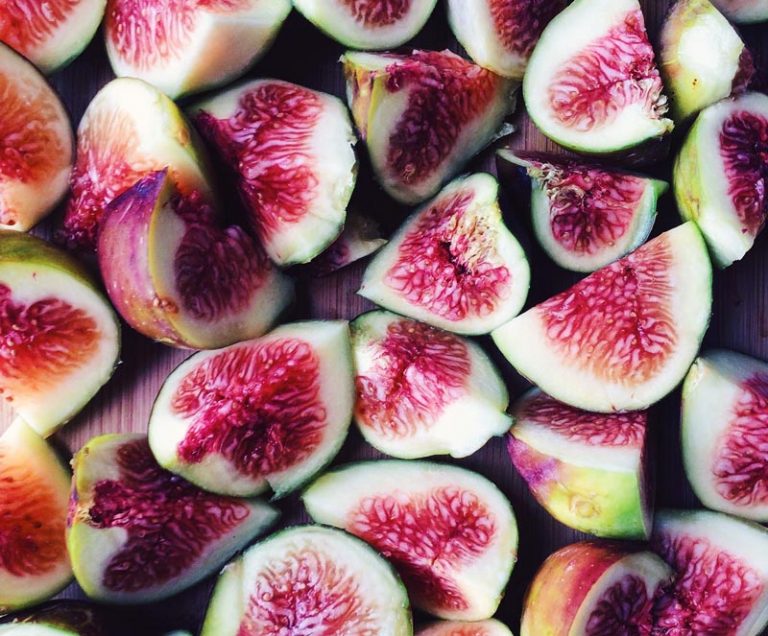 It's a personal decision to weigh up the arguments and decide for yourself if figs are vegan. Image by S W / EyeEm via Getty images

Vegans, as far as practicable, should avoid eating any animals or animal products. The way some varieties of fig are pollinated means every edible fruit of some fig varieties contain at least one dead wasp – so by eating a fig, you are eating a dead insect. So far, so not vegan.

According to online natural history textbook Waynes Word, the wasp will enter the fig, passing into a part of the plant – known as the calimyrna –which she can’t lay her eggs in. Out of frustration, she wanders around, pollinating the flowers as she goes.

Eventually she dies from sheer exhaustion, and is broken down by a protein-digesting enzyme inside the fig.

Jess Mann, who has been vegan for 22 years, says: “While there are always going to be trace amounts of insects in food – and even animals like mice being accidentally killed during the harvesting process – I see that as different to eating figs.

“You are not guaranteed to be eating these insects when you’re eating other veggies or fruits, but you are with figs, so it seems like an easy and practicable step to take to avoid them.

“I personally have a revulsion to eating meat because I find it disgusting. Just look at the ‘controlled rotting process’ hung beef goes through – it’s gross. I feel the same about eating a decomposed wasp’s body. It’s just horrible to think about a living creature decomposing – and then eating it.

“Even many omnivores find the idea of eating insects distasteful – though it is commonplace in some cultures; it’s not something that is globally popular. For many vegans, it’s this element that makes them feel a bit squeamish about them.”

You’ve heard both sides of the argument, now it’s over to you to decide whether or not you continue to consume figs.

And while you’re in a reflective mood, why not ask yourself the question ‘Is beer vegan?‘