Are avocados vegan? We investigate the truth behind the myth

Feeling confused and starting to question whether or not avocados are vegan? We explore the facts behind the myth that vegans can't eat avocados

Since that episode of QI, it’s a question many of us have been faced with – are avocados vegan or should we ditch avocados from our vegan recipes repertoire?

In the show, host Sandi Toksvig asks what can be eaten from a choice of avocados, almonds, melons, kiwis, or butternut squash, by “strict vegans.”

When one contestant answers “any of them,” host Sandi Toksvig informs him that he is wrong.

Why? “The same reason as honey,” Toksvig said. “Because they’re so difficult to cultivate naturally, all of these crops rely on bees, which are placed on the back of trucks and taken long distances across the country. It’s migratory bee-keeping and an unnatural use of animals and there are lots of foods that fall foul of this.”

However, Toksvig failed to present all of the information surrounding this ‘debate’.

Yes, it’s true that bees are needed to pollinate avocados, as well as many of our food crops, be that through ‘natural’ local-bee pollination, or migratory bee pollination. Whilst not all farms rely on ‘unnatural’ pollination, some farms have no choice.

In large areas like California, US, there are not enough local bees for the pollination of the massive fruit, vegetable and nut-farms needed to feed the population.

There are of course, smaller farms that don’t need to rely on commercial beekeeping for pollination, and we should attempt to buy produce from these when we can.

But it isn’t practical or possible for every individual to access the naturally-pollinated produce found at some farmer’s markets. Multiple vegan experts and vegan activists have put forth arguments that explain why avocados and almonds are still vegan.

Yes, avocados are vegan: it’s in the definition of veganism

If we look at the description put forth by The Vegan Society, the creators of the words ‘vegan’ and ‘veganism’, we understand that veganism “is a way of living which seeks to exclude, as far as is possible and practicable, all forms of exploitation of, and cruelty to, animals for food, clothing or any other purpose.”

In an ideal world, we would live entirely independent of animals, and would not take advantage of their natural processes. But, the definition acknowledges that it is not possible for every individual to completely avoid all forms of exploitation.

Tracy Reiman, a representative for PETA, commented: “Average shoppers can’t avoid produce that involves migratory beekeeping, any more than they can avoid driving on asphalt.”

Sadly, Reiman is right. We live in a food system that massively relies on large-scale produce-farms that utilise bees, and unfortunately, modern society and overpopulation has made it virtually impossible to break away from food produced this way.

Nevertheless, vegans will continue to do their best with the fruits, vegetables, and nuts available.

Spokesperson for The Vegan Society, Dominika Piasecka, said: “Vegans avoid using animals as far as possible and practicable. We are aware that many forms of farming involve indirect harm to animals, but it is unfortunately not possible or practicable to avoid the destruction of other animals in most farming at this time.

“However, we do not consider that just because it is not possible to avoid one hundred percent of the cruelty, suffering and exploitation to animals that we should not bother at all.

“Vegans make a huge contribution to the reduction in suffering and death caused to animals and we would welcome any changes made to farming practices that support this.” 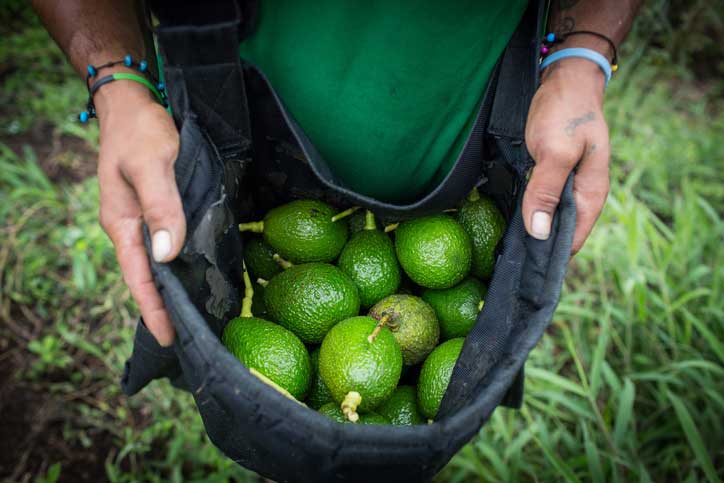 If avocado’s aren’t vegan, neither are most crops

QI failed to bring to light that it isn’t just crops like avocados and almonds that rely on commercial beekeeping.

If we took Toksvig’s comment at face value, then it would limit our diet to a dangerous few food sources.

Once more, the definition of veganism means doing your absolute best according to what’s practical and possible – we need to draw a line somewhere. Making choices about our diet requires us to balance the effort we expend against the impact on our daily life. Similar balances occur when we make choices on how much we should donate to charity, or what we do to reduce our energy use or CO2 emissions.

Following on from this, a similar debate flooded the internet, asking ‘are figs vegan?’ because of something that happens during the pollination process.

When a female fig wasp lays her eggs inside the fruit, she loses her antennae and wings, getting herself trapped. In a natural process, figs release an enzyme that breaks down the mother-wasp’s body into protein. When young female wasps hatch, they continue the pollination process.

Multiple mainstream news outlets questioned whether or not this made figs vegan, since numerous wasps were harmed as an indirect result of farming figs.

The environmental impact of avocados

Another issue often raised is the environmental impact of avocados. It’s been widely reported that compared to other fruits and vegetables, the impact is relatively high.

Of course, this is still nowhere near the level of climate destruction that factory farming and the production of meat foists upon our planet, so you are still doing better than most.

Regardless of whether you’ve had avocado on toast this morning or not, research by Oxford University has shown that a vegan diet is the single most effective way to reduce our environmental footprint.

In short, even as vegans, there are always better, more ethical choices we could make when it comes to food consumption. To some, that will include a diet that is avocado free — for valid reasons.

That being said, by our definition of what is possible and practicable, avocados can form part of a vegan diet.

So this certainly isn’t the same question as ‘Is honey vegan?’, but that’s not to say we don’t fully understand the reasons why some vegans might shun avocados in the future.

It’s an individual choice and one that should be respected, but we would fall short of claiming that avocados are not vegan altogether.

Now we’ve cleared that one up, how about the question ‘is bread vegan?’ Find out when you might be tucking into a non-vegan loaf unexpectedly…