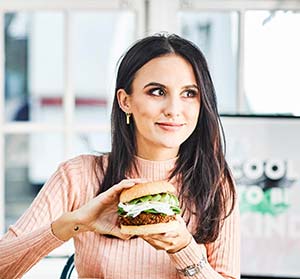 Lucy Watson is a business woman, TV personality, animal rights activist, and vegan author. In September 2017, Lucy launched her first cookbook called ‘Feed Me Vegan’ packed with delicious vegan recipes. It’s been named “Best Vegan Cookbook” by animal rights organisation PETA in their 2017 Vegan Food Awards and was an Amazon bestseller. Her second book, ‘Feed Me Vegan: For All Occasions’ was released in 2018 and features easy recipes for everyday veganism, from a quick, week night pasta to a knock-out roast with all the trimmings.