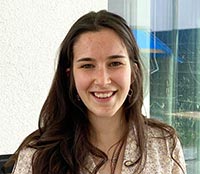 Cooking and good food have always been one of Liz’s biggest passions.

Since completing her undergraduate BSc(Hons) in Health, Nutrition and Exercise Science, Liz has been sharing her vegan recipes to show people that you don’t need to compromise on taste when cooking plant-based meals.

Liz loves trying out new vegan recipes and ingredients and exchanging ideas with people from the vegan community as she believes that you never stop learning.

In fact, Liz is now taking on a new challenge and studying BSc Dietetics to further her knowledge of nutrition.

As well as creating recipes for Vegan Food & Living, Liz has also had recipes published by Moutarderie de Luxembourg and Kachen Magazine.